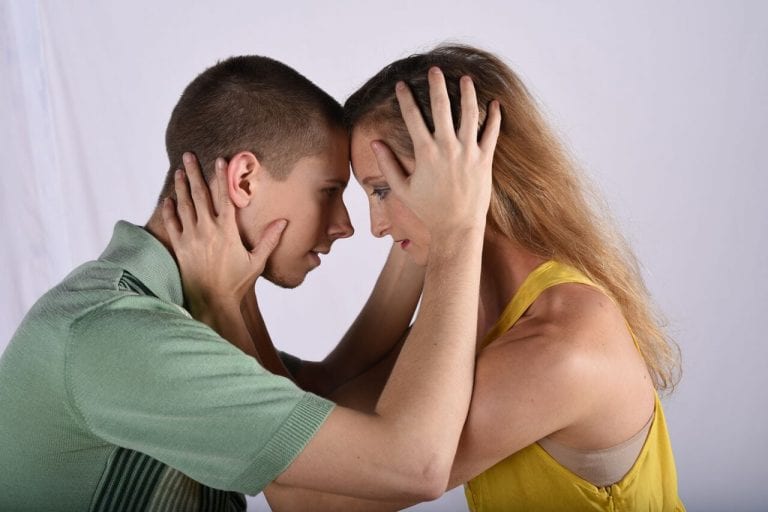 The unexpected passing of D. Patton White’s brother, Claiborne, was the catalyst of his new work July 13, 2016: 4:10 PM, which was commissioned by Jeffrey Clark and will be presented by Core Performance Company at The B-Complex March 1–3.

White, who has been with Core Dance since 1992 and now serves as company manager, describes the creation of the piece as “cathartic” on many levels. “In exploring with the dance artists, I was very interested in delving into relationships – in my mind, the thing that brings meaning to our lives,” he says.

During the process of shaping the work, White asked Core dancers to share two stories: one about a time they felt close to a person who was significant to them and one about a time they felt distant from that person. Some of those stories were hysterically funny, while others were poignant. In addition, White had the dancers create artwork in response to listening to the third movement of Vaughn Williams’ Symphony No. 5., a piece recommended by Clark and which is used in July 13, 2016: 4:10 PM.

“He is a huge Vaughn Williams fan and is very familiar with all of his work,” says White. “Symphony No. 5 was composed during World War II, and many musicologists see the work — and the third movement in particular — as a healing balm to the atrocities that England was suffering at the time.”

The artwork produced by the dancers didn’t directly lead to choreographic material, but the art and the stories did serve as a frame that helped provide a context for the movement. White did, however, create a projection sequence of the art and other images, which he describes as a set that the movement will live within.

When it came time to create the movement for July 13, 2016: 4:10 PM, White says he facilitated the process by getting out of the way. He believes that having the dance artists generate their movement vocabulary makes for a performance that is more authentic. “I would observe and I would engage them in improvisational scores that furthered the development of the initial movement vocabulary,” he says. “I would then help direct or focus attention on specific moments. Really, none of the movement vocabulary is ‘mine.’ What is mine is the overarching architecture of the work and how I helped direct it into relationships with one another.”

White is no stranger to weaving performers’ personal stories into his works. For him, the most interesting work he has seen and experienced has been grounded in relationships. The trickiest part of working in this way was making sure he honored the spirit of the stories and the truth that they represent. “Working this way takes the performers into what can be a very vulnerable place — exposing your secret diaries to the world, in a way,” he says. “I have to make sure that I don’t try to say something that isn’t honest, just for dramatic or choreographic effect.”

Throughout the process, another experience emerged: White began a new exploration of his relationship with his brother.

“As the various studies began to take shape, I began to recognize those fragments of my own memories of my relationship with my brother and imagined his relationships with others throughout his too short life,” he says. “I felt like I was getting the opportunity to know him in ways I had not known him before.”

In addition to the third movement of Vaughn Williams’ Symphony No. 5, White also ended up including Otis Redding’s “These Arms of Mine” for its feeling of nostalgia, and The Puppini Sisters’ version of “We Have All the Time in the World,” which he describes as an “an ironic comment on this fleeting and tentative thing we call life.”

White also collaborated with Berlin-based composer Christian Meyer, who has written music for Core Dance before. Meyer originally composed an entr’acte to be played during the intermission to link the first half of the program to the second half. “I absolutely fell in love with that music and began experimenting with it as the final scene in my piece,” says White. “I began talking with him via Skype to explore the possibility of expanding it in length, and he agreed to extend it from 11 minutes to 30.”

July 13, 2016: 4:10 PM will include interactive prologue and postlude sections for audience members. The prologue, featuring an environmental sound score by Meyer, will allow audience members to join with the dancers as they manipulate and arrange items such as construction materials, saw horses and boards.

White says the choice to include this experience came directly from his relationship with his brother. “Claiborne and I grew up in a very rural area in the mountains of Colorado and had the mountains as one enormous playground,” he says. “We explored places that we shouldn’t have — abandoned mine shafts, mining mills, rocky cliffs — and we transformed the wild reality of the mountains into our own version of a theme park by building trails and stairways into the mountain side. In short, we brought enormous meaning to our lives by just playing.”

He says the prologue will offer audiences an “opportunity to engage in that mindless sort of play.” He describes the postlude as a more somber experience in which the audience will be able to engage in very simple, mindful, meditative walking.

“The space shifts just as we all shift as we age — we become more mindful of the short time that we have on this planet,” he says. “Again, it’s because of my grieving of the loss of my brother that I invite the audience into the opportunity for reflection and the embodiment of a soulful connection to others — to honor their own truths, to honor the relationships that they have had in their lives.”