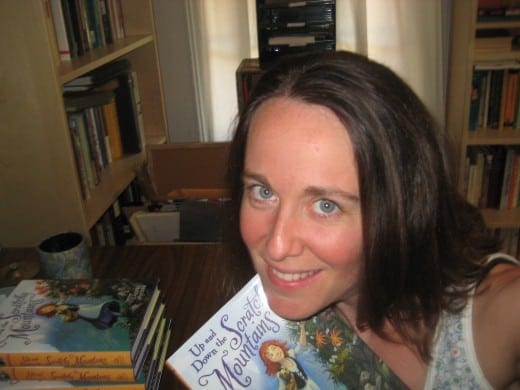 The day I meet Laurel Snyder in her Ormewood Park home is cold and clear. Her house brims with books: a full bookshelf sits next to the entryway, a side table overflows with latest picks from the library. It is clear that this is a home preoccupied with reading. 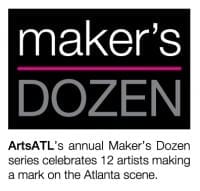 The author of five children’s novels and six picture books praised for their compelling plots and captivating characters, Snyder is warm and talkative, her style disarming. I can see how rooms of children would be quickly captivated during school visits. A native of Baltimore, Maryland, and a graduate of the Iowa Writers Workshop in poetry, Snyder, now 41, planned to be a poet. A job at Hillel, a Jewish organization, diverted her from the “typical poet’s life of writing, waiting tables and maybe teaching.”

Her writing also shifted gears. “I was so deeply inside the Jewish world. My writing became more preoccupied with religion, something I’ve always been interested in. And then I started thinking more about writing prose.”

She started working on an anthology of essays about interfaith marriages (like her own). After she and her husband moved to Atlanta in 2004, and still in the process of editing the anthology, she began to think about writing full time. She published the anthology Half-Life: Jew-ish Tales from Interfaith Homes in 2006.

After the birth of her first child, she discovered that because of child care, it was costing her money to work. She decided to stay home to write and raise her children.

Snyder credits her son (she now has two, ages seven and nine) with her writing career. “I never would have made the leap without him,” she says. 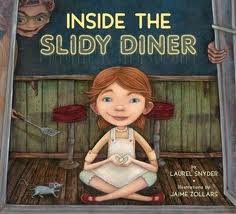 She soon published her first books for children: the picture book Inside the Slidy Diner in 2008 and a novel, Up and Down the Scratchy Mountains, in 2010.

For Snyder, the jump from poetry to children’s literature was natural. One who toted Edward Eager’s Half Magic and C. S. Lewis’ The Chronicles of Narnia to graduate school, she has always adored children’s novels. “These books that I loved as a child and still love are as much a part of my mythology as Judaism is,” she says.

Picture books, she says, are more similar to poetry than one might think. “The discipline required for poetry, the economy of language, is the same,” she explains.

Creating these two types of stories allows her to intersect deep interests: Judaism, poetry, storytelling and the whimsical sense of possibility.

Writing for young people has allowed her to tap into her childlike capacity for wonder. “I tell my children that I still believe in unicorns. It’s not that I have seen one or expect to, but I don’t rule out the possibility.”

This possibility for wonder infuses her novels with hope and magic. But her novels also wrestle with deeper emotional issues. Bigger than a Bread Box, published in 2012, explores 11-year-old Rebecca’s encounter with a magical bread box that can produce anything as long as it fits inside. Her discovery helps to ameliorate the sting of her parents’ separation.

This interplay of fantasy and real-world issues has made Snyder’s novels popular, but it also points to an implicit juxtaposition in children’s literature in which difficult subjects are often presented in straightforward ways.

“Children read in a direct way, and their books need to be simpler, more direct, than adult novels, but that doesn’t mean they’re easy,” she says.

“Creating simplicity is difficult. Children’s books can be heartbreaking and true in ways that make me feel that they’re more that way than adult books.” 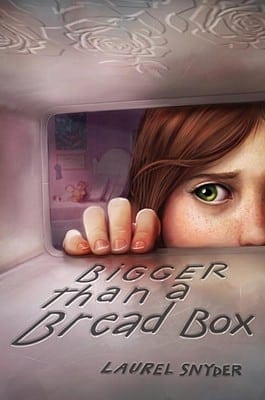 Exploring truth and sadness in children’s novels has posed creative challenges for Snyder because the culture of childhood has changed. Historically, children’s novels are constructed around independent protagonists who experience growth and change apart from adults.

Yet, Snyder observes, parents have become more protective, and the notion of a child experiencing adventure away from adults is harder for their parents to accept.

As a result, according to Snyder, the literature has become more fantastic. “It’s easier to swallow the idea that danger happens in another world versus a scenario where a child encounters a challenge on the way to the drugstore for a lollipop.”

But, Snyder argues, children’s novels have — and should — encourage independence. Her next project seeks to examine the ways this search for independence plays out between two friends in a realistic setting. Set in Ormewood Park, the novel will follow two characters — one sheltered, one without boundaries — and explore the ways these contrasting views of childhood affect friendship and growing up.

Maker’s Dozen is an annual series that spotlights a dozen creatives whom we think you ought to know or know more about. The profiles will run on Tuesdays and Thursdays through April 16. See more Maker’s Dozen profiles:
Cassidy Russell, artist and improve performer
Susan Bennett, voice of Siri