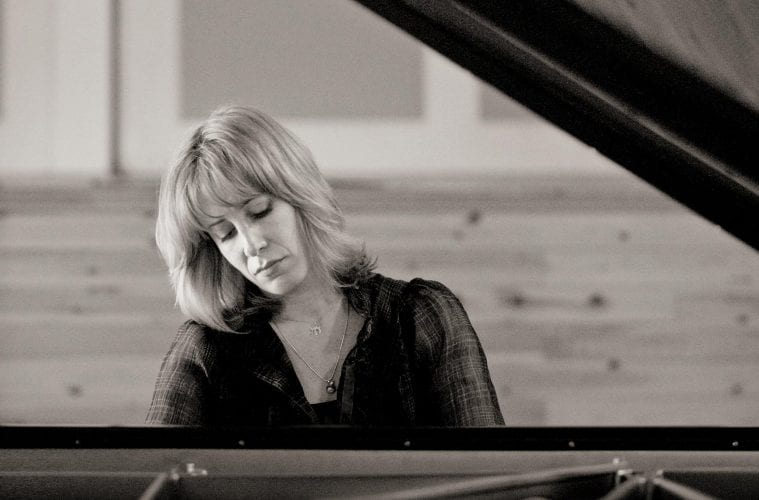 Ingrid Fliter made her reputation as a stand-out interpreter of Chopin. (Photo by Sussie Ahlburg)

On Thursday evening at Symphony Hall the Atlanta Symphony Orchestra performed a concert of music by Nielsen, Chopin and Rachmaninoff, led by guest conductor John Storgårds and featuring guest pianist Ingrid Fliter. The concert will be repeated once at Symphony Hall on Saturday at 7:30 p.m.

Thursday’s concert was preceded at 6:45 p.m. by one of the ASO’s occasional chamber music concerts with audience seated onstage. The musicians gathered around where the podium would normally be, facing the back of the shell. Unfortunately, I arrived late, missing the opening work, the first movement of Beethoven’s String Quartet, Opus 59, No. 1 — the first of his three “Razumovsky” quartets — but was in time for the next two works.

First, there was a lovely performance of the slow second movement from Brahms’ Clarinet Quintet, performed by clarinetist Laura Ardan, violinists David Coucheron and Jiin Yang, violist Reid Harris and cellist Christopher Rex — interestingly, these same musicians will perform the entire quintet on Sunday as Georgian Chamber Players at Kellett Chapel in Buckhead.

The final piece was the second movement of Bartók’s challenging String Quartet No. 2, in a sizzling-edged performance by violinists Anastasia Agapova and Jay Christy, violist Yiyin Li and cellist Karen Freer — the same musicians who performed the Beethoven on the front end. As for the orchestral concert proper, Finnish conductor and violinist John Storgårds made his ASO debut with this concert. He has been artistic director of the Chamber Orchestra of Lapland since 1996. In 2003, Storgårds also became principal guest conductor of the Helsinki Philharmonic Orchestra, its chief conductor in 2008 — from which he steps down at the end of this year.

In 2012, he also began work as principal guest conductor of the BBC Philharmonic, with which he is in the midst of a project to record all of Nielsen’s symphonies. Next week, Storgårds will lead the Detroit Symphony Orchestra in a concert that includes Nielsen’s Concerto for Flute and Orchestra in D major, featuring DSO principal flute David Buck.

It was fitting, then, that Storgårds would open the concert with a work by Nielsen, the rhapsodic overture, “A Fantasy Journey to the Faroe Islands” (“En Fantasirejse til Færøerne”), the first time the ASO has ever performed it. It’s an occasional piece depicting a sea voyage from Denmark to the Faroes, an autonomous archipelago within the Kingdom of Denmark, located between Scotland and Iceland.

The piece draws upon Faroese folk music as a part of its purpose — a gala concert that celebrated a visit from representatives of the Faroe Islands in 1927 — and proved an interesting, fresh excursion into the Danish composer’s work.

Pianist Ingrid Fliter, a native of Buenos Aires, Argentina, drew intense international attention when she became the sixth-ever recipient, and only female recipient, of the Gilmore Artist Award in 2006, a $300,000 prize awarded only once every four years.

Within days of the announcement, Fliter made her American debut as soloist with the Atlanta Symphony Orchestra. She had previously won the silver medal at the 2000 Frederic Chopin Competition in Warsaw, and has evolved a reputation as a distinguished interpreter of Chopin’s music.

For this concert, Fliter performed Chopin’s Piano Concerto No. 2, reinforcing her reputation for a technique that feels effortless and thoughtfully sensitive. Her playing possesses passion but is not overblown. Fliter’s encore of Chopin’s “Trois Écossaises” (“Three Scottish Songs”), Opus Posthumous 72/3 from 1826, was felicitous, a less familiar piece which proved a winning dessert, well complementing the concerto as main course.

Rachmaninoff’s Symphony No. 2 is musical comfort food for symphonic audience, but it has also made a prominent appearance in popular culture thanks to a section from the second movement being in the score for the 2014 motion picture Birdman, which received Academy Awards for Best Picture and Best Director earlier this year.

Thursday’s performance felt adequate but not outstanding. The pacing seemed on the front edge, particularly in the third movement. Granted, tempos that are too slow can be deadly for this symphony, but faster tempos are not really the answer to that problem. What was needed was a more thorough and sustained shaping of phrases, the kind of long singing arcs that Rachmaninoff’s music demands.