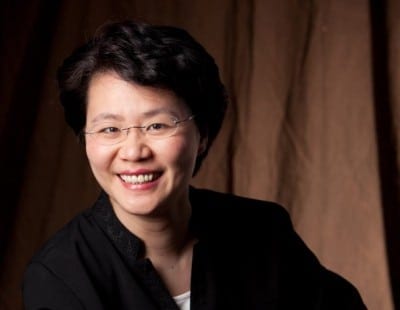 This week, Mei-Ann Chen returns to Symphony Hall with a glowing young career and a still brighter future. A solid musician with a flair for the theatrical, her Atlanta Symphony homecoming, October 6-8, will include a welcome surprise: they’re preparing an encore.

Now the music director of smaller orchestras — the Memphis Symphony and Chicago Sinfonietta — Chen credits musicians of the ASO and its chief conductors, Robert Spano and Donald Runnicles, with teaching her how it’s done.

“It was exhilarating working with the ASO,” says the Taiwanese native. “The orchestra was willing to jump off a cliff with Robert and Donald. That’s very rare, very special. If you’re a conductor you have to be an artistic leader, then the musicians will trust you. That is what I learned in Atlanta.”

For two years, starting in 2007, Chen was the ASO’s conducting fellow — a new name for the traditional assistant conductor role. Her apprenticeship was to soak up as much as possible from the orchestra’s senior conductors and stand in front of the ensemble as often as possible, in children’s concerts and run-out performances across Georgia. She was also on call for every concert, her baton at the ready in case the scheduled maestro fell ill minutes before the opening downbeat. This meant preparing in detail every score on the program, itself a deeply educational experience.

At 38, she’s on a steady ascent, although she still sees how unlikely it’s all been. “Being an Asian woman, as a conductor, is several minorities in one,” she says. “Even my manager told me it would be a tough career, and I’d have a lot of bumps.” Indeed, she earned a doctorate in Michigan in part because she wasn’t getting any job offers.

But ASO musicians, who do not suffer fools without complaint, started raving about Chen as soon as she arrived in Atlanta; several told me that she was well above expectation in her confidence, big-picture views and, most of all, sheer musicality. They enjoyed working with her. After her ASO stint, and another apprenticeship with the Baltimore Symphony’s Marin Alsop, the role model to female conductors everywhere, she started landing serious gigs. Chen had graduated to full maestra status.

In Memphis, she says proudly, ticket sales have increased 110 percent from last season. She’s quick to add, “We still have challenges, don’t get me wrong, but we’re on the positive track. Atlanta, like Baltimore, convinced me that positive and optimistic orchestral musicians is key. I try to bring that to Memphis.”

This week’s ASO concert, an interlocking program, plays to her belief in multiculturalism, with music by African-American and Chinese composers, plus a brooding, high-calorie classic (Cesar Franck’s D minor Symphony) and a jazzy, lyrical concerto (Ravel’s G Major Piano Concerto, with Terrence Wilson as soloist), where the Old World looks enviously at the new.

A playful curiosity will open the evening. Michael Abels’ “Global Warming,” from 1991, has been performed by the ASO before. The title offers several meanings, which the music illustrates with verve. Are we headed toward a desert landscape and environmental catastrophe? That’s the sound of the parched violin and cello solos at the start. Or is global warming a hip term for cultural mash-ups, where the mixing of American and Irish and Middle Eastern musical styles raises the temperature on the dance floor?

And about that encore, which audiences often adore but is a rarity in Symphony Hall? Chen has planned the atmospheric and fun “Saibei Dance” by a Toronto-based composer, An-Lun Huang. It gets back to Chen’s drive as an artistic leader. “It’s about having firm ideas of what’s important and where you want to go. Atlanta gave me the confidence to say, ‘OK, now it’s my turn, my chance to bring all that I’ve learned to the orchestra.'”