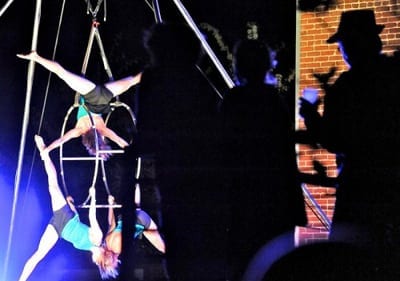 Looking back at FLUX 2011: Artists, students, musicians, a critic, a city councilman weigh in

FLUX 2011 transformed the Castleberry Hill district into a magical place where bicyclists paraded with lanterns, dancers prowled in the shadows and light projections filled the night sky. According to the organizer, Flux Projects, this year’s installment of the annual one-night arts festival drew more than 10,000 visitors and encompassed 33 projects presented by 224 artists.

Always a sucker for videos, I was really drawn to Jeff Demetriou‘s and Fake Love’s “Home Sick.” At first I was disconcerted by how much the building behind was allowed to interfere with the projection, but as the image of the façade crumbled away to reveal the natural setting, I was totally drawn in. As my eyes became accustomed to the dual layers, moving elements popped out: the running waterfall, a bunny hopping. The layering of the urban and the natural made me consider what this area must have looked like before the city of Atlanta was born.

It was impossible to see everything, so I asked a few people to comment on their favorite works at FLUX 2011. Here’s some of what they said.

Allison Wise, eighth-grader at the Westminster Schools: D’AIR Aerial Dance Theatre’s “Humanology” was my favorite part of FLUX 2011 because of the way it showcased so many different types of aerial acrobatics and dance. I also loved the theater aspect to it, with a little mini-performance between each display of acrobatics. All of the performers were so talented, with at least three of them being around my age. I could never do something like what they showed in their performance, and I admire them greatly for that.

Andy Ditzler, curator of Film Love: An ironic oasis, Jane Garver’s “Voice Box” provided a performance-driven map of the city superimposed on Castleberry’s crazy-quilt streets. It subtly undercut the spectacle of FLUX even as it provided a metaphor for Atlanta’s temporary landscapes and the ever-shifting memories housed within. White boxes evoking phonographs housed looped recordings of citizens singing songs for the artist: forgotten lyrics, half-remembered melodies. One man sang an old public-domain song: “’Twas my old heart, Dilly Dilly, that told me so….” Is the song so old that it’s new again? Is that really how it went? One thing we know: tomorrow it will be just a memory. [See Andy’s video of the project here.]

David Yocum, architect: I decide in advance to attend FLUX 2011 without knowing anything of the things I might find. I want a bare, unburdened experience. I stumble upon a crowd of folks, five persons deep, craning to get a look into an empty lot down below street level. I can only hear music. It’s voluminous and also slightly warped. Melodiously disjointed. I walk around the block and join a small group. There are bleachers for sitting, and this is clearly a performance, but no one is necessarily smiling. Fog fills the big space. One woman crouches alone in the center. She’s moving, but seemingly with pain. Are her limbs damaged? Is she hurt? No, she’s just straining, hobbled, hunched. She’s reaching with purpose, taking small steps and then pulling back. She is both fluid and broken. The onlookers up above are casually chatting and enjoying the scene. So why am I concerned?  Why is this woman misshapen? I should stop staring, but don’t. It is painfully beautiful. I wonder, is this what we become when things go terribly wrong? Or is this just the everyday burden we all carry but just can’t see?

I know nothing about modern dance. Or gloATL’s new work “Livers.” But the way the woman silently heaves and lurches, stumbles and strains, gives me a momentary rush of empathy. And that’ll do it.

Fahamu Pecou, artist: I entered the rustic loft at 188 Walker Street with its narrow passageways clogged with eager-eyed patrons anxiously scanning every nuance or sudden movement in anticipation of being “wowed” by some work of art. I, unlike them, was feeling a bit jaded. Both tired from a long day and numb from carrying my 30-plus-pound son around for an hour or more, I hadn’t quite seen anything too particularly moving or exciting until that point. As I made my way downstairs and through the crowded vestibule, I was immediately struck by the oddest and most whimsical work I’d seen all evening. On three abnormally shaped orbs were projected a series of whimsical and odd vignettes that seemed to dance in time to an even more quirky jazz tune. The projections — a combination of motion graphics and animations — danced in and out of relevance to both the music and each other, yet always somehow remaining quite captivating and fun. I really appreciated the lightheartedness of Matthew Burge’s “Duets à  la Turk” and the fact that he took the idea of art and technology a bit further than a simple projection or light show.

Gil Weinberg, director of music technology and co-director of the TechArt Initiative at Georgia Tech: The Medeology Collective‘s “Cadavre Exquise: Remix” was one of the very few projects at FLUX that actually called for audience participation. It was the only project that compelled me to step in and participate — dancing in front of the cameras, moving to the music, and enjoying my live video image mashed up with strange heads, torsos and legs. More importantly, my two-year-old son was enjoying it with me, making faces to the camera and laughing at his strange large projected image. A public art piece that engages a two-year-old as much as his forty-something-old father must be doing something right.

Joey Orr, Ph.D. candidate at Emory University: I saw my favorite FLUX project on Nelson Street. Craig Drennen was playing the song “Awful” by Hole on top of a small stage. The performance was dedicated to a churlish philosopher in one of Shakespeare’s plays about a man’s transformation from patron to misanthrope. While Drennen was wearing a sweet-looking oversized mascot head, the grunge sounds coming from his electric guitar gave it the tone of the carnivalesque, that creepy, dark feeling that disturbs your sense of being entertained — that exact moment of turn from the fun to the freaky when you discover something is sweet because it has just begun to decay. Yeah. It’s awful.

Kwanza Hall, Atlanta City Council: I have always been intrigued by Jane Garver’s work for Le Flash and FLUX. From “Social Insects” in 2008 to this year’s “Voice Box” installations, she seems to be inspired by Castleberry Hill. I was in the neighborhood at a private dinner earlier that evening. When I stepped out onto Peters Street to join FLUX, I found myself in a swirl of people I knew. I spent an hour just shaking hands, hugging people and catching up. Garver’s illuminated boxes of silk and steel caught my attention. After so much face-to-face interaction, I enjoyed the intimacy of standing in front of the boxes and listening to her recordings of total strangers singing songs on the fly. While the installation certainly stands on its own merit, I also admire Garver’s process. Her no-holds-barred, plunge-into-the-crowd style reminds me a lot of what I do every day as a city councilman. She clearly has never met a stranger, and neither have I.

Gyun Hur, artist: I spent the first half of the night handing out maps and glow sticks and shouting “Happy FLUX,” then later found myself as part of the throng that followed “Livers,” the performance by gloATL. Dancers were moving along with music speakers, transforming the energy of the Castleberry streets. An audience building up just to get glimpses of their performance was another aspect of performative happening that was taking place. GloATL’s final performance was absolutely gorgeous. Lighting, music, scenery, choreography and the makeup of the audience all became one memorable piece to me. With a more curatorial vision, I hope for an even more successful night of FLUX next year.

ArtsCriticATL readers: Come on — what was your favorite thing (or least favorite thing) at FLUX 2011? Feel free to chime in. If you can’t remember an artist’s name or the title of a work, you can find a list of them at the FLUX website.