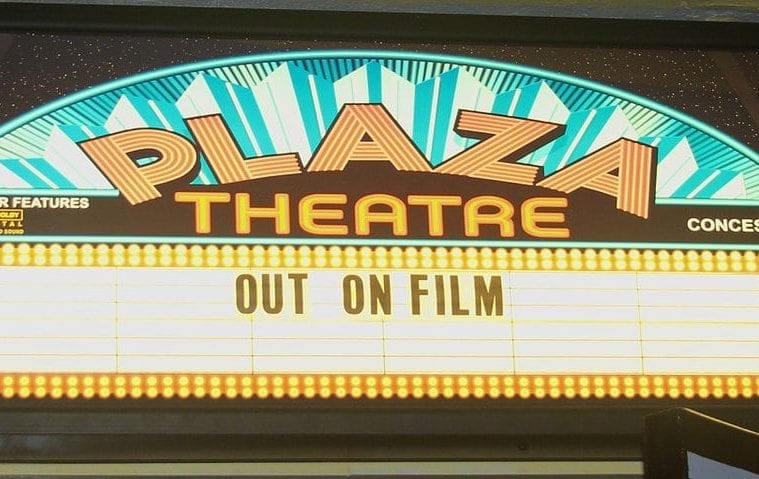 Luminary Awards: Out On Film shares cinematic stories by, for and about the LGBT community

A community is nothing without the stories it tells. For three decades, Out On Film, one of the oldest LGBT film festivals in the country, has been dedicated to the screening of LGBT films in order to create a vital space for a community to come together to share its stories. ArtsATL is proud to honor the organization with this year’s Luminary Beacon Award for Community Engagement.

“I’ve always been a movie geek,” says festival director Jim Farmer. “I grew up watching movies in Milledgeville, Georgia . . . . Traditionally, our community hasn’t always had the most positive programming. The movies that we used to see were dour, the hero had to die. They were tragic, and they didn’t represent our community in the best way they could. For me, it’s important to showcase films that have positive portrayals and that show the diversity of our experiences.”

Out On Film was originally established in 1987 by Southeastern Arts, Media & Education Project (SAME) and soon after began collaborating with IMAGE (Independent Media Artists of Georgia, Etc.). When SAME disbanded, IMAGE continued the festival. IMAGE eventually became the Atlanta Film Festival and continued running Out On Film until 2008, when the organization gave up the LGBT festival in order to focus on its own rapidly expanding event. Farmer was part of the initial team that took over Out On Film in the summer of 2008.

“I saw a posting in Georgia Voice mentioning that Atlanta Film Festival was giving up Out On Film,” says Farmer, who at the time had done some work in the realm of movie marketing. “The new group was looking for people to help. I knew, ‘This is just so me.’ That was really the beginning.”

Throughout his tenure, Farmer and his husband, Craig Hardesty, who serves as board chair and president, say they’ve sought to present a broad range of films that offer thoughtful representations of a diverse community. “It’s important for us to have films that speak to a lot of different communities,” Farmer points out. “Our patrons aren’t just people from Midtown who can go anywhere and be around other people like them. Some of our patrons are from parts of the state where there aren’t places to go, where there isn’t a group of people they can hang out with and feel comfortable around. We try to reach those people.” 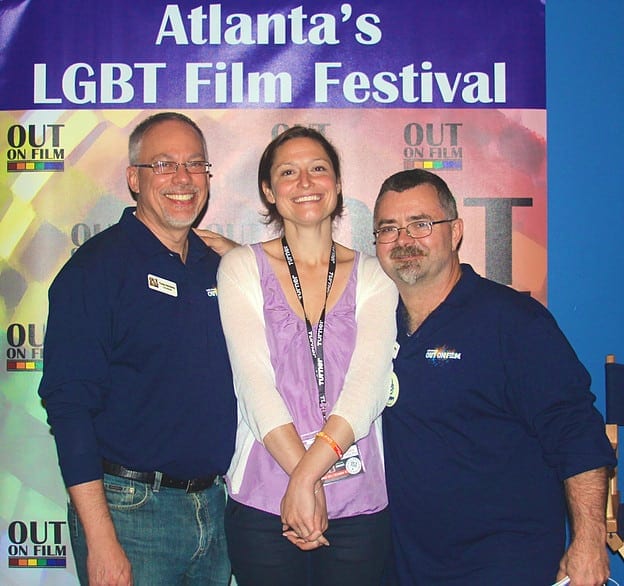 Craig Hardesty (left) and Jim Farmer (right) welcome actor, author and screenwriter Marisa Calin to Out On Film. For thirty years, the festival has screened films by, for and about the LGBT community.

In 2017, Out On Film hit a landmark with its 30th anniversary. The festival expanded its programming across 11 days and two weekends, screening films at three different venues, including its longtime home, the Landmark Midtown Art Cinema, for the largest Out On Film ever.

“There are frustrating times when you think ‘Why are we even doing this?’” says Hardesty. “But then you hit that moment during a festival when a patron comes up to you in tears and hugs you and says thank you. Those are the moments you say, This is why we do it. And this is why we’ll do this again next year.”

Farmer wears several hats, and though many know him primarily as the director of Out On Film, ArtsATL readers are just as accustomed to thinking of him as a regular theater critic for this publication. Farmer says that in some ways the two roles aren’t that different. “I always look at films critically,” he explains. “It’s the same core quality you bring to both jobs. As a critic, you have to be there and be present. You have to try to understand what the work is trying to do.”

In the end, it’s all about connecting people through art. “Art is a way we find the truth,” Farmer says. “It touches people to see their lives portrayed on screen. . . . So many of these films you won’t find at your local cineplex, they’re not on Netflix. Our stories are unique, our experiences are unique. Coming together as a community is still so vital.”

Join us on Sunday, January 28, at Ponce City Market’s City Winery as we honor Out On Film at the second annual Luminary Awards.