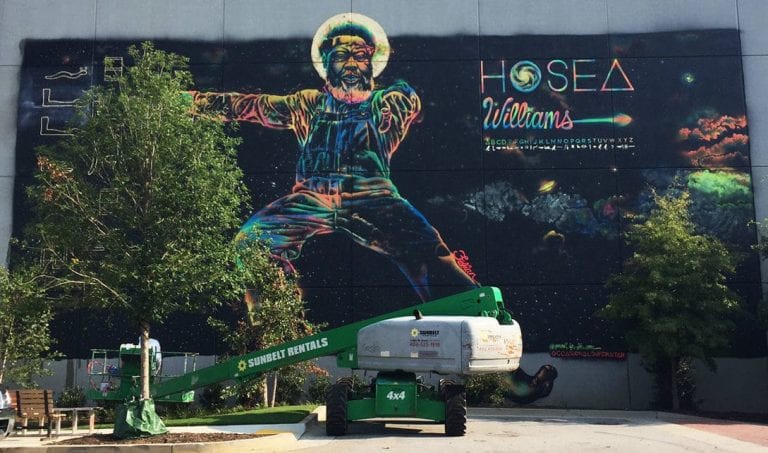 They are everywhere in Atlanta — as they are in London, Buenos Aires and Seoul — scaling walls and underpasses, brightening mundane urban architecture with colorful figures and designs: the ubiquitous murals that today are collectively known, rather imprecisely, as “street art.” In many cases these murals become local landmarks or distinguish a neighborhood’s sensibility, not to mention the thousands of Instagram posts for which they provide material.

Last year, however, and not for the first time, some of these murals spurred a legal battle between the City of Atlanta and a group of local artists, property owners and civil liberties attorneys. This lawsuit occurred following a memo sent by city government last spring informing artists and arts organizations that murals created without multiple layers of ill-defined bureaucratic approval would be subject to whitewashing within months, in addition to potential criminal charges or fees for the artist who created the mural and the property owner who commissioned it. Following vociferous public outcry and weeks of settlement discussions, the City of Atlanta eventually entered into a consent order agreeing not to enforce the restrictive ordinance.

Last year’s dispute was not only urgent but also rather unique. According to Weber, a prominent local civil rights attorney who formerly served for 17 years as the legal director of the Georgia ACLU, “Most large cities throughout the country don’t have these ordinances. This is a very rare type of ordinance, and the City of Atlanta’s is the most restrictive one we’ve seen in the entire country.”

Greenamyre, who previously worked with Weber at the Southern Center for Human Rights, said there were a number of serious problems with the ordinance from a civil rights perspective. “There were five or six different grounds that each would have been independently sufficient to strike down the ordinance,” he said. “As written it was so overbroad and expansive that it literally barred any artistic expression of any kind that’s visible to the public, even if it takes place on private property. That would govern dancing on your porch, or any kind of sculpture you put in your yard, or even a painting inside your house as long as you keep your blinds open. You don’t have to be a lawyer to know that violates the First Amendment.”

No one can say with certainty why the city decided to suddenly begin enforcement of a decades-old ordinance. But artists and arts organizations administrators, the first people to receive the memo about the ordinance’s enforcement last April, understood its problematic implications immediately. Though he was aware of having painted murals without the requisite approval, artist Yoyo Ferro didn’t receive the memo directly but as a forwarded message from Monica Campana, who was executive director of public art nonprofit Living Walls at the time.

“It was really unreasonable,” Ferro said. Although the city’s initial memo offered an opportunity for existing murals to be grandfathered in under the ordinance, it also required that artists request amnesty and, in doing so, admit their guilt of committing a crime by painting unapproved murals. Together Campana and Ferro assembled a meeting with some of the artists who had received the message. “The idea wasn’t to start a lawsuit,” said Ferro. “The idea was just to send a message that this was ridiculous and we’re not doing this. I wanted to make sure that we as artists were all aligned on not giving up to this pressure from the city.”

Peter Ferrari, who was among the artists in attendance at that meeting, was already familiar with the circuitous process of gaining the city’s approval for a mural. After receiving a grant from Atlanta’s Office of Cultural Affairs, Ferrari had to make multiple trips to City Hall for administrative reasons. “I don’t think people quite realize how much work the approval process is,” Ferrari said.

Ferrari was also already acquainted with Weber, whom Campana invited to the emergency meeting with artists. Though Weber described it as otherwise being “asleep on the books,” the same ordinance the city was threatening to enforce last year had previously been invoked in 2012, causing a concerned group including Weber and Ferrari to challenge its legitimacy then. Following that incident, the common understanding was that the ordinance was no longer a threat, which is why Weber found the artists’ news alarming. “I did not receive any word from the city,” he said, “even though the city had committed to not enforce that ordinance when we resolved our previous lawsuit.”

After being convinced by the attorneys’ confidence that the ordinance was unconstitutional, Ferrari, Ferro and Williams joined the lawsuit against the city along with Henry, who faced potential charges or fees because he had commissioned unapproved murals on some of his properties. (Though she was, according to Ferro, “instrumental” in assembling this group, Campana declined to join the lawsuit because of her position at a nonprofit.) The June 9 deadline imposed by the city’s memo caused the lawsuit to escalate swiftly. “It was an absolute rush,” said Weber. “The whole cultural fabric of Atlanta would change in an instant, essentially, because of this date that was set by the city.”

Likely due in part to the unfavorable press caused by the lawsuit, it soon became apparent that the city wasn’t going to fight for the right to remove unapproved murals. After weeks of settlement discussions and a decision from a federal judge declaring it unconstitutional, the city agreed to not enforce the ordinance going forward. Ferro was painting a mural in Summerhill when he received news of the plaintiffs’ success from a passerby. “Someone came and said, ‘Congratulations on the lawsuit!’” he said. “I didn’t know what had happened! We had won the lawsuit and I was in the middle of painting an unapproved mural.”

The artists involved in the lawsuit largely credit Weber’s experience and expertise for their victory. “Gerry handled it very well and I kind of just had to sign my name on the line,” said Ferrari. Despite his gratitude for last year’s ruling, Ferrari also expressed some uncertainty about whether the threat of city interference with murals had truly passed. There are already rumors about another similar ordinance being put forward in the future. “We’ll see what happens,” Ferrari said, “but I think we’re going to keep holding them to account.”

Despite the victory he shared with his fellow artists, Ferrari is also aware of the special prestige afforded to murals like his, which often occupy the same spaces as the work of graffiti artists, who — needless to say — don’t enjoy the same legal protections. “There needs to be a place for artists to express themselves that isn’t condoned and doesn’t have somebody curating it. I think graffiti artists understand that their work isn’t valued as much as murals are, and I think that’s kind of part of the allure — to paint your name on a wall and not really care if it’s art or not.”

The lawsuit filed by the recipients of this year’s Catalyst Award represents a significant contribution to Atlanta’s collective conversation about the importance of free expression. This conversation, however, is far from over — perhaps fittingly for those who are receiving an award called catalyst. The neighborhoods becoming adorned with murals and the people who live in them should remain at the center of any conversation about street art: what they see as beautiful, not imported beautification. For artists like Ferro, street art is precisely about these residents and how they feel about their community. Above anything else, he said, “I want to make people proud of where they live.”

Join us as we honor the Catalyst Award recipients at the second annual Luminary Awards at Ponce City Market’s City Winery on January 28.