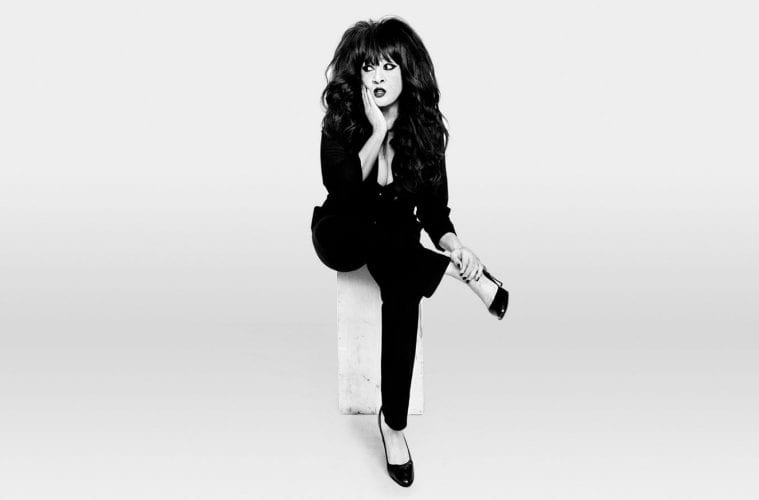 We love you, Ronnie Spector

If rock and roll can be said to have a spirit, then Ronnie Spector — one of the greatest voices in pop-music history — has lived it, loved it, helped create it. She’s toured with the Rolling Stones (they opened for her, no less), partied with the Beatles, danced for Hendrix and drank with Dylan. As Steven Van Zandt of Bruce Springsteen’s E Street Band put it: “Everybody loves Ronnie. It’s the first bylaw of rock ‘n’ roll.”

The legendary singer comes to Atlanta’s City Winery to perform a concert on December 6, a Christmas-themed show that includes such classic Ronettes hits as “Be My Baby,” “(The Best Part of) Breakin’ Up” and “Walking in the Rain.”

ArtsATL caught up with Spector at the outset of her busy tour to chat about her upcoming Atlanta performance.

ArtsATL: I was curious to see that the show is being billed as: “Ronnie Spector performs as Ronnie Spector and the Ronettes for the first time since the 1970s.” [Ronnie’s sister, original Ronette, Estelle Bennett, died in 2009, and her deeply religious cousin Nedra Talley no longer performs as part of the group]. Can you tell me about the decision to perform under that name again?

Ronnie Spector: I’ve always had background singers, but never called them Ronettes. Something hit me. A few years ago we did this outdoor festival [England’s Glastonbury Festival]. When I looked over at the girls, outdoors, having so much fun, I said, “Why shouldn’t I call these girls Ronettes?” So we got a routine. They looked at the old videos of the original Ronettes, and they got the same routines. You’ll see the original Ronettes on video in back of us, but then you’ll see two Ronettes on stage with me. It’s a fabulous, fabulous show, if I must say so myself.

ArtsATL: I assume these aren’t just any backup singers. What makes someone a Ronette and not just a backup singer? What sort of qualities do you look for in a vocalist?

Spector: First of all, they have to have long hair. And they have to have that Ronette look. We had an audition. Fifty girls came down to be Ronettes. I had to see the attitude of the girls. The Ronettes had an attitude. We were very innocent, yet sexy, yet bad girls. We were all of those things. The original Ronettes (from l to r): Nedra Talley, Ronnie and Estelle Bennett

ArtsATL: You mentioned the bad girl image. When you were starting out, was that an image you sought to project? Or do you feel that was something that was put on you?

Spector: We were from Spanish Harlem, and at the beginning we were just [New York disc jockey] Murray the K’s dancing girls. We came out with slits up the side, and we had to have tight dresses to dance. All of a sudden, we became the “bad girls.” It was at the Brooklyn Fox, the theater, and we were there for ten days. Everybody you could think of, Marvin Gaye, Tom Jones, and we were just Murray the K’s dancing girls. We sang of course, but we had to do songs like “What’d I Say” and “Turn on Your Love Light.” People saw us, and they loved it. It started there.

ArtsATL: It’s a Christmas-themed show. I take it you’re a pretty big fan of the season?

Spector: Are you kidding me? I start Christmas in September.

ArtsATL: What were Christmases like for you as a kid?

Spector: I was this kid that loved Christmas. I was in love with Santa. He was my first crush, by the way. At five years old, I made my mother take me down to Macy’s, and there was a line around the block to sit on Santa’s lap. I got on his lap, and he said, “Tell me what you want for Christmas.” I said, “Santa, I saw this doll right here in Macy’s, and I would love it.” And he said, “If you’re a good little girl, you’ll get it.” We came from very humble beginnings, so my parents couldn’t afford it. But I understood as I got older. We just lived with it, and we loved it. My family was so big, we had so much fun. Going to my grandmother’s house, it was nothing but music and fun. Some of my uncles tried to be comedians and sing; my aunts, three of them, pretended to be the Andrews Sisters, just in my grandmother’s house, nothing professional. I took in all of that and said, “I’m going to do something with all of this.” Since I was six or seven, I would go to my grandmother’s and get up on the coffee table and start singing silly songs. You know what got me? They applauded. I had all these cousins sitting on the floor all applauding me. That applause stayed with me as a little girl. That’s what I wanted to hear . . . And as they say: the rest is history after that.

ArtsATL: Early in your career, you became very close with the Beatles and the Rolling Stones, who were also just starting out in their careers as well. Any special memories of spending a festive Christmastime with the lads?

Spector: No. That’s the only thing we didn’t do. The Ronettes were on tour, and we went to England. The Rolling Stones were our opening act. The Beatles hadn’t come to America yet, but they gave us a party, and that’s how we met the Beatles. I have really great memories, but nothing Christmasy. We were either at home or on tour. Even when we were with Murray the K and did a Christmas show, we were working. You didn’t see your pals as much. Amy Winehouse performing in London in 2006

ArtsATL: A cover of Amy Winehouse’s “Back to Black” is part of your show. What did you think when you first saw and heard Amy Winehouse, when so much of her look and sound were clearly inspired by what you’d pioneered in the 1960s?

Spector: You know what? It blew my mind. I saw a video of her when she was younger. She was in a record store, they filmed this. She pulled out a record, The Ronettes Featuring Veronica, and she said, “That’s who I want to look like. That’s who I want to sound like.” I met her later on in London, and she was the sweetest thing. I have to tell you, I was so upset when she passed. I met her in England, and now I see her mother all the time when I go there. I recorded “Back To Black” right after she died, for the proceeds to go to people fighting alcoholism and drug addiction [the Daytop Village substance abuse treatment centers]. I was so upset. Especially the way she died, with the drugs and alcohol. I loved her, and she loved me. She had to look like me. It blew my mind. She wanted her hair in the beehive and the short skirts. Everything I did on stage with the Ronettes, she wanted to be like. That was such a compliment, for her to come to my shows over in London. And then a year later she died. I thought, “Oh my god, I’ve got to keep going.” You know what I mean? I thought, “I’ll carry on for you.”

ArtsATL: Any young female singers coming up now that you especially admire?

Spector: I don’t know about female singers, but I like Ed Sheeran. I like Bruno Mars. Rihanna’s good with certain songs. I like her slow stuff. Do you know what it is, Andrew? I’ve been in the business so many years. When you hear Gladys Knight, Dionne Warwick, it’s hard for me to love the women of today. I won’t say names or anything. But when you grew up with those voices, you couldn’t even think about the people today. If you listen to the voices of today, it’s totally different. There’s so much echo. Is that their real voice? When you saw Gladys Knight or you saw Dionne Warwick, you saw them, you heard their voices. You didn’t have choreography surrounding them or all that smoke. What is that? I’d rather see the performer and watch them move, not the stuff around them. It’s a bit much. I guess I’m old school. Another thing: today’s artists come and go. I’ve been here 50 years. It’s great to be alive today and singing and still being a bad girl. I love all of that. It blows my mind.

ArtsATL: I was looking at your tour schedule. It’s pretty intense. Do you like being on tour? Isn’t it exhausting?

Spector: Are you kidding?! I love it! We have the tour bus. I love it. It’s just the greatest feeling. It also reminds me of the ’60s. We did the Dick Clark Caravan of Stars. We had two Greyhound buses. That was our whole thing: touring. We loved it, and I still love it. I love going to places like Atlanta! I can’t wait. New York disc jockey Murray the K was instrumental at several points in the careers of Ronnie Spector and the Ronettes.

ArtsATL: After the tour, what’s next for you?

ArtsATL: Your look and your sound have been inspiring to so many people, but your story of escaping an abusive marriage and recovering from it have been inspiring, as well. Any advice for people who find themselves in those sorts of situations or are coming out of them and trying to recover?

Spector: In my case, I just got on a plane. My mom came and got me from California. I came right back to New York and talked to Murray the K since he was the one that started us out on the radio. I said, “I have to work.” I couldn’t stay away from it. That was the problem in my marriage. I never worked for seven years. I never saw a stage for seven years. I couldn’t deal with not being on stage. It was my passion. It’s what I loved. Take anything else, but don’t take my life, my love, my passion.

ArtsATL: Do you have any tips for women that want to recreate the Ronettes look?

Spector: Just be a bad girl and walk out with your head held high. Strut your stuff, and you’ll be okay. You gotta wear that Cleopatra eyeliner. Walk out there, do your thing and don’t be afraid.