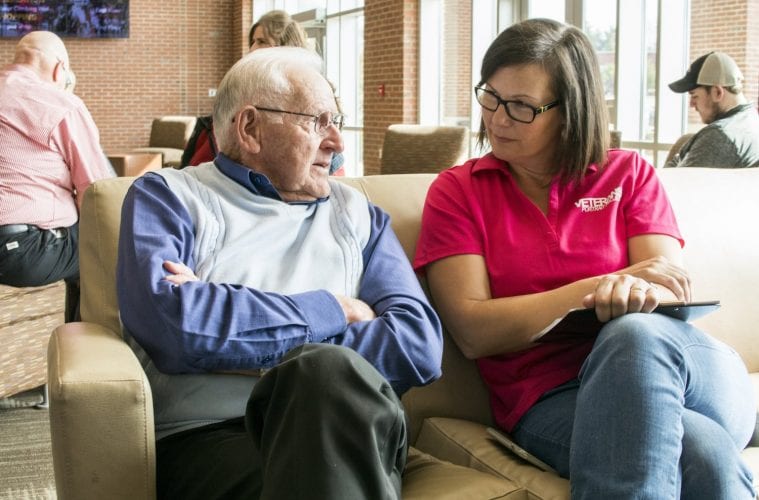 Former Staff Sergeant Stacy Pearsall has photographed over 6,000 men and women who have served in every conflict from World War II to the present day. Her black-and-white images capture a broad range of subjects and expressions. By turns heroic, playful, enigmatic, haunted, tender, hard, broken and badass, the most common denominator is a tensile strength that unites the tribe. Infants, children and service dogs may make cameo appearances in some of her pictures, but Pearsall’s documentary style always steers clear of any sentimentality in favor of sincerity.

The same can be said for Pearsall herself, who will present a public lecture on her Veterans Portrait Project (VPP) beginning at 6:30 p.m. on Thursday, December 7, in the Rich Theatre at the Woodruff Arts Center with a Q&A period to follow. Forty-four of her portraits are currently on display at the nearby Beauchamp C. Carr Gallery on the Woodruff campus. Alvin Townley, the Woodruff’s director of corporate philanthropy and veterans programs, learned about the Veterans Portrait Project last summer and jumped at the chance to exhibit Pearsall’s work. He also invited her to extend her stay in Atlanta to photograph local veterans on December 8 and 9.

“We believe service and art should go together,” says Townley. “Art offers a common medium for people who have served and civilian populations, and can be a force for healing.”

Pearsall would be the first to acknowledge the truth of Townley’s statement. “I don’t think I’m discovering anything, but revealing what’s already there,” she says. “I get more [from the Veterans Portrait Project] than I give. It started as a way to get the camera back in my hands, but ended up being cathartic. Hearing the stories of other veterans and having them validate my emotions and offer understanding has been motivating and integral to my healing.”

A native of Charleston, South Carolina, Pearsall was inspired to join the Air Force as a 17-year-old by a family tradition of military service dating back to the Revolutionary War and by her sister, who became the first active-duty female crew chief in the Air Force.

While covering the Army’s Infantry Division as an aerial combat photographer in Iraq, she was injured when her convoy was hit by a roadside bomb in 2004. Three years later, she was re-injured by an IED, and the resulting seizures, traumatic brain injury and nerve pain forced her into early retirement. She received a Bronze Star Medal and Air Force Commendation with Valor for combat actions in Iraq and took pride in coming home on her own two feet. But she was unprepared to talk about the invisible injuries she’d sustained that undermined her independence and chipped away at her confidence. Stacy Pearsall’s portrait of Charlene Marx, a member of the Army Nurse Corps from 1981 to 1985

“I think the reluctance to ask for help and tendency to downplay our needs is a real sort of military mentality,” she says. “I went from being the best I could be to the biggest dirtbag in my unit who couldn’t hold her own weight.”

The physical and psychic pain were so unbearable that Pearsall contemplated suicide until finding a new sense of purpose and focus. By 2008, she was spending hours in VA waiting rooms, surrounded by veterans from every generation and branch of service, as she rehabilitated. Initially, she says, she felt lost, but that the esprit de corps ultimately “gave me the courage to pull myself up by the bootstraps and push through the pain.” Seeking a way to honor and thank her compatriots, she eventually picked up her camera and started taking their portraits.

Her first subject was a World War II veteran named Mickey Dorsey. “Mickey seemed like part of the crowd, but he’s not,” says Pearsall. “He’s an extraordinary person who did extraordinary things on the ground at Normandy and when liberating concentration camp survivors. He was deserving of attention and recognition.”

Though it was never her intention, Pearsall’s work — some of which now hangs on the walls of the Pentagon and in the National Portrait Gallery — has garnered great attention and acclaim. She has authored two books (Shooter: Combat from Behind the Camera and A Photojournalist’s Field Guide: In the Trenches with Combat Photographer Stacy Pearsall), been lauded by Obama’s White House as a Champion of Change, holds an honorary doctoral degree from The Citadel and has served as a nominating juror for the Pulitzer Prize. Last month, on Veteran’s Day, millions of Today Show viewers watched as Pearsall was paired with Charlie, an America’s VetDogs service animal, for the first time.

Pearsall says her first thought upon seeing Charlie was, “there’s no way he could be mine!” She doubted her worthiness and wondered if there might be another vet somewhere who was more deserving of having a companion whose very existence might offer a giant step toward self-sufficiency. Needless to say, it’s hard to imagine many Today Show viewers who shared her sentiment.

Sitting for a portrait can be anxiety-inducing under the best of circumstances. So it stands to reason that the stakes are raised if a subject feels mentally, physically or emotionally vulnerable, as can be the case with some veterans. But Pearsall’s ability to relax her subjects and get them to bare their souls (all within the 12 minutes it takes for her to take the average portrait) speaks to her ability to connect with veterans quickly and wordlessly. Pearsall says her own experience as a military veteran helps her connect with the veterans who sit to have their portraits taken (Photo courtesy Stacy Pearsall/The Woodruff Arts Center).

“I’ve been there, done that and know where they’re coming from,” she says. “Something as simple as going through basic training, raising my right hand and reciting the Oath of Enlistment gives me an access point for seeing beyond the superficial. Whether the sitter is a WWII veteran in their late-90s, or an 18-year-old recent graduate of basic training who’s still wet behind the ears, we share a patriotism and passion for our country, and a commitment to service that is uniquely veteran.”

Admission to the Beauchamp C. Carr Gallery is free, and veterans receive free parking with veteran’s ID. Pearsall will speak about her work at 6:30 p.m. on Thursday, December 7, in the Rich Theatre at the Woodruff Arts Center.