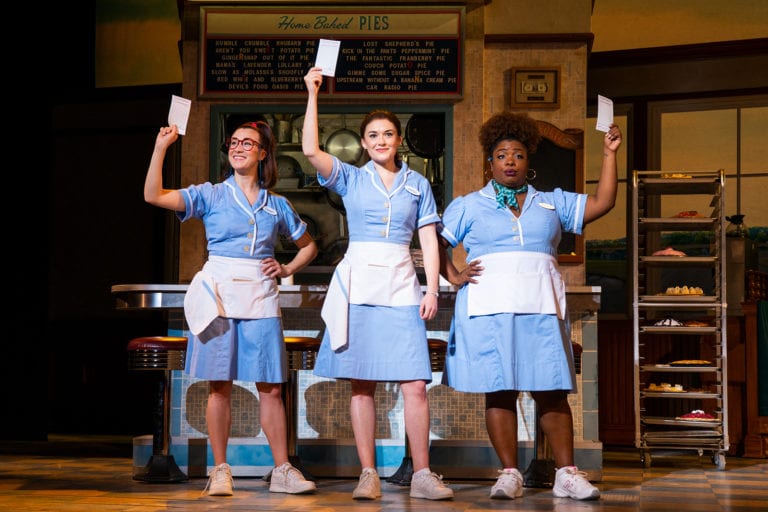 Local actors take the stage in Waitress at the Fox Theatre

Tony-nominated musical Waitress, like its title character’s signature pies, has been a sweet and surprisingly complex treat for audiences nationwide, and now, it’s Atlanta’s turn to experience the sugar rush. The show will be onstage at the Fox Theatre February 5–10 and is getting a dash of homegrown talent in the cast.

Based on Adrienne Shelley’s 2007 film of the same name, the story follows Jenna, a diner waitress and dessert prodigy living in rural America. Trapped in a loveless marriage, Jenna is driven by an unplanned pregnancy to enter a baking competition for the chance to win the funds to leave her abusive husband. All the while, she is carrying on an affair with her attractive prenatal physician, Dr. Jim Pomatter.

The onstage incarnation of Waitress is notable for having Broadway’s first all-female creative team. Most notably, the score was composed by six-time Grammy nominee Sarah Bareilles, writer and performer of the hits “Love Song” and “Brave.”

Atlanta native Maiesha McQueen will return to the show to play Becky, a friend and coworker of Jenna. McQueen had previously been part of the tour in the fall, playing the role of Nurse Norma. Before joining the cast of Waitress, McQueen enraptured Atlanta theater audiences with her big voice, tackling roles in Da’ Kink in My Hair at Horizon Theatre and Chasin’ Dem Blues at True Colors Theatre.

“It’s very exciting and surreal . . . to return to a theater I grew up going to,” McQueen says of performing at the Fox Theatre. “I could not have asked for a better homecoming.”

Those familiar with either the musical or the film it’s based on will know that Waitress, for all its charm, doesn’t shy away from the difficult subjects of abuse and class divide. McQueen says that the message really resonates for audiences in the South and Midwest.

“There’s an excitement that we get in [the audience] seeing their dialect, cadence and humor onstage,” says McQueen. “There’s something very down-home about our story, and the music draws people in.”

McQueen isn’t the only familiar face in the cast. Waitress held local auditions for the role of Jenna’s daughter, Lulu. Fifty girls auditioned for the part, and little starlets Riley Fuller, 5, and Harper Allegra, 6, will take turns playing the role in Atlanta. This is both girls’ first time performing in a Broadway show.

Allegra says that she is most looking forward to “performing at the Fox Theatre and being in front of over 100 people. I am really excited to sign the Playbill. I have been practicing my signature.”

Fuller agrees, and though she has butterflies, she says she’s ready to be on the big stage and have everybody clap for her.

McQueen just hopes that people from all walks of life will allow themselves to fall in love with the story.

“The story is told in a very beautiful way,” says McQueen. “You just kind of go for the ride. I hope audiences will allow themselves to go on the journey.”