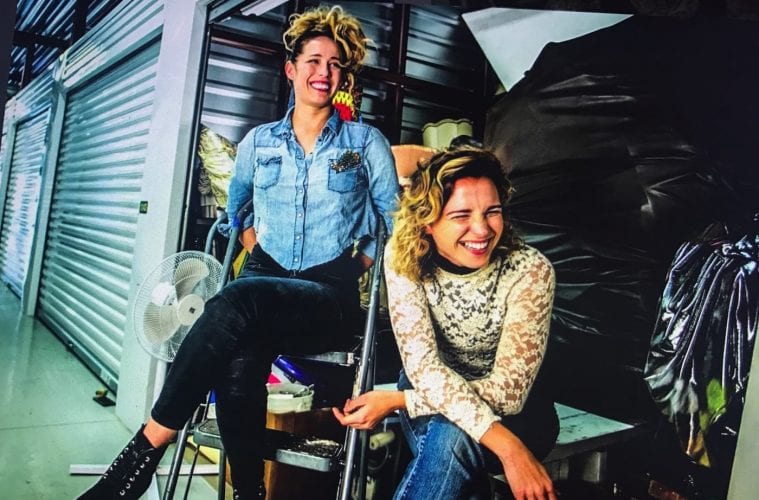 Dashboard takes the safety off: a locked and loaded conversation about “Unloaded”

On April 27, tens of thousands of firearm enthusiasts from around the country will pack the Georgia World Congress Center for the yearly convention of one of the most powerful lobbying organizations in the country. It’s estimated that the National Rifle Association’s 2017 Annual Meeting, which the NRA describes as “an exciting celebration of freedom,” will bring more than 80,000 people to downtown — the most notable of which is President Donald Trump, who will deliver the conference’s keynote address to event attendees.

That weekend — only a mile away from the exhibition hall where NRA members will peruse the convention’s 15 acres of guns and gear for sale — Dashboard, curator Susanne Slavick and Marcia Wood Gallery will unveil Unloaded, a nationally traveling exhibition supplemented with work from 10 Atlanta artists responding to domestic gun culture and interpreting the historical and social issues surrounding it.

The timing is no accident. Dashboard cofounders Courtney Hammond and Beth Malone describe the nearby NRA convention as an underlying part of the show’s concept. “And yes, we’re hoping to pull from the convention crowd,” Hammond adds. While it might seem like a potential tinderbox of controversy for an art show about gun culture to open blocks from a hotbed of ardent Second Amendment supporters, Hammond and Malone’s goal isn’t to provoke controversy or even change hearts and minds. It’s simply to get folks talking.

According to Gun Violence Archive, over 7,000 instances of gun violence have been recorded in the last three years in Georgia alone. In Atlanta’s 5th Congressional District, home to both Marcia Wood Gallery and the Georgia World Congress Center, over 300 people have died at the hands of gun violence since 2014. Productive conversation about gun violence is necessary, but amidst an embittered and ever-polarized landscape in which political discourse is often reduced to slings and arrows, navigating that kind of dialogue can feel like blindly waltzing through a minefield.

So, Dashboard assumed the duty of helping to fill that void by creating a space where those conversations can happen. “We felt like Atlanta could use a good collective chat about guns,” Hammond says.

In that spirit, we caught up with the duo to talk about the pressing nature of the debate, how it will manifest in Unloaded, and how the show’s artists chose to interpret this fraught discourse.

ArtsATL: Tell us a bit in your own words about Unloaded, Dashboard’s role in it and how this transpired.

Courtney Hammond: In 2015 we produced an exhibition and program series, Dialogue: Conflict/Resolution, heavily triggered by several current events, and our human or systemic responses to tragedy, particularly in the US. In that exhibition, we covered topics and Conflicts that assuredly shouldn’t have been approached through one singular voice or angle. So that show had a lot of working parts, multiple artists, gallery work, performance work, culinary events, public art . . . but as we moved through the planning, the issues became so pressing that we couldn’t ignore our time frame and that it was too far from right now. So we moved the opening date up by six months. It was the right thing to do. Everyone needed to talk, then, not six months from then.

Similarly, Unloaded is incredibly timely and seeks to provoke dialogue.

The show came to us through artist Ruth Stanford who exhibited two pieces in our Dialogue: Conflict/Resolution exhibit. She was also a Dash partner in bringing the Pittsburgh-based collaborative Conflict Kitchen here for a 100-person Palestinian dinner [on March 12, 2015], where we looked to open up conversations re: the US conflict in Palestine. Ruth actually works with Dashboard year-round now in a Special Programs capacity — it’s a great fit.

She brought Unloaded to our attention and connected us to Susanne Slavick, Andrew W. Mellon professor of art at Carnegie Mellon University and the originator for the exhibition. We loved the show and the topic. We looked for a date that made sense to bring it here and raised funds for the exhibition travel and support of local commissions.

ArtsATL: You mentioned moving Conflict/Resolution‘s opening up six months because of the political climate and the urgency you felt. Was there a specific incident that catalyzed that decision?

Hammond: The air was so thick with sadness. I remember just being terribly, and ignorantly, confused. It had been about one year since the Michael Brown murder and just over two years from the Trayvon Martin murder. The surface felt like it was boiling . . . it feels strange to talk about it now. So much has happened since then.

Gaia had just opened his mural, #IfTheyGunnedMeDown, covering several images brought forward in the Twitter movement where many black men and women were prompted by the question, “If you died, which picture would the media use?” We partnered with the Center for Civil and Human Rights to present Ruth Stanford’s Deliberation, public artwork in tandem with that mural. Meanwhile, at the Dashboard gallery, Dr. Doris Derby gave intimate gallery talks and we exhibited photos from her participation in the Mississippi Civil Rights Movement, the Student Nonviolent Coordinating Committee (S.N.C.C.) and the Free Southern Theater from the ’60s.

I hope that exhibition helped open some dialogue during that time, if only just a bit. ArtsATL: What is it about this particular topic, in this moment in time, that spoke to each of you?

Beth Malone: I’m interested in creating a space that allows the nuance of gun use to be explored rather than letting the staunch anti/pro rhetoric heard within political parties and mainstream media be the conversation. The #BlackLivesMatter movement is the biggest issue facing this country and gun use. Also, the fact that Congress prohibits the CDC from treating gun violence as a public health crisis is very telling to me about the power of lobbyists.

Hammond: I feel like we simply don’t talk about it enough, especially considering the lack of formal research funding surrounding the concept. In this lack of information, we are left to form our own insufficiently educated opinions. I feel like we need to communicate as openly and with as much patience for each other as possible . . . and in some cases here with Unloaded, clever artists and creative levity can hopefully break down some walls and make those conversations more accessible.

ArtsATL: Can you tell me a bit more about what your conversations have been like throughout this project, and how your perspectives align or differ?

Hammond: I wouldn’t say that we disagree on the fundamentals regarding guns in the United States. But simply enough, I own a gun and [Beth] doesn’t.

Malone: My personal take is, I didn’t grow up with guns, they’ve never been a part of my life and never will be. But I also think if people eat meat, they should know how to kill their own food. They shouldn’t be so removed from that process, as if it just happens by magic. I’m also not interested in going after anyone’s second amendment rights, but I do believe in common sense legislation, particularly where assault weapons are concerned — I’m sure we agree on this last one.

Hammond: I grew up with guns and learned how to shoot them in my backyard with my dad, mom and brother. I’m fairly comfortable holding and using one.

I didn’t always own a gun, though. I’ve had some pretty traumatic break-ins, as a single female living alone. I would say these moments, above my nostalgia, are ultimately why I own a gun, and a bat, and a rubber hose with a bolt on the end.

ArtsATL: Gun culture is obviously an issue deeply rooted throughout America, but it’s particularly culturally pervasive here in the South. How does that context shift the messaging of the exhibition, if at all? What does Atlanta add to a show like Unloaded?

Malone: Susanne, the curator, doesn’t hide away from the fact that there are antigun pieces throughout Unloaded. It was important to Dashboard that the show include a number of journalistic pieces, pieces that document gun use rather than editorialize about it.

We want to make sure people associated with the NRA know they are welcome to walk through the doors to see the show. We really do want to create dialogue across the board. ArtsATL: What were you hoping to bring to the table by incorporating local work into Unloaded, and what do you feel these artists, their works and their voices add to the dialogue?

Malone: Atlanta and the South are so loaded. There are so many opinions about guns, so many uses — both literal and figurative uses — in both mainstream and counter cultures. We wanted to be respectful and representative of those varying points of view.

ArtsATL: Dashboard obviously has experience with engaging the public through thought-provoking art. How has this approach evolved for you in the last few years? Does this philosophy feel any different (or more urgent, or more necessary, or not) in the current political climate, compared to years past?

Hammond: I think I talked about this a little in the beginning re: Dialogue: Conflict/Resolution and Conflict Kitchen, but yes: as curators, we respond to our surroundings through our work, passionately. I do think it’s pretty clear the work we’ve presented since the beginning of the year has had a hopeful but urgent tone: Nikita Gale, Karen Tauches, Dr. Doris Derby and Evereman. As a curator and presenter of work I think it’s necessary to respond to the temperature of your projected audience, it’s necessary to always seek out a larger more diverse audience, and it’s necessary to respond to the voices of talented artists. The artists we present have such dynamic and creative approaches to communication. It’s truly incredible.

ArtsATL: Unloaded has been traveling for a couple years, but some might feel that issues like gun violence are more politically urgent than ever. (In addition to the ongoing prevalence of mass shootings, I’m also thinking about things like Georgia’s highly controversial campus carry bill, for instance.) Do either of you feel as though this show is especially timely?

Malone: We absolutely think this show is timely and utterly important for Atlanta and the South. We really just want to talk openly about these issues with people of varying opinions. Communication is wonderful step in the right direction.