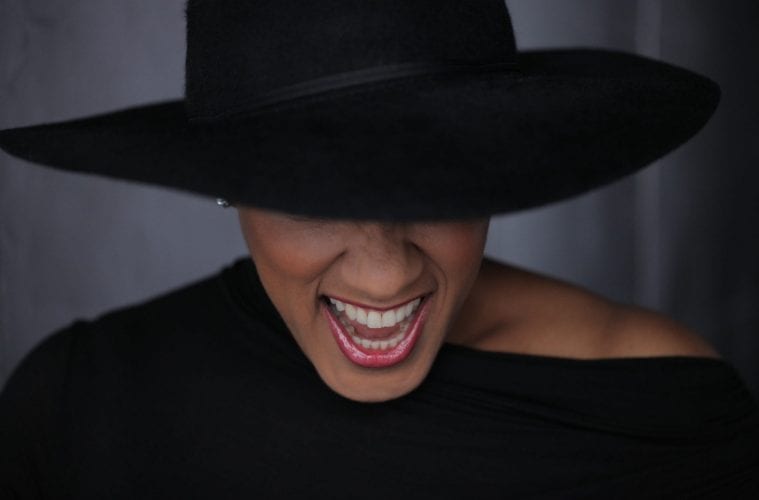 In life as in music, pain and wisdom make beauty for jazz singer René Marie

The story of René Marie’s path to success is every bit as compelling as her irresistible interpretations of the jazz standards. The Grammy-nominated singer, composer, arranger, theatrical performer and teacher originally spent 20 years working as a janitor, a McDonald’s employee, a grocery store clerk and a banker before finally finding her groove as a professional musician at the age of 42.

In advance of her concert at the Rialto Center for the Arts on April 20, Marie spoke with ArtsATL about her life before her career in music, the joys of singing and the process of letting go, whether onstage or off.

ArtsATL: What is your earliest recollection of music?

Marie: My father loved music. It wasn’t unusual for him to play an opera and change the lyrics to fit the occasion of whatever we were doing, whether drinking our milk or cleaning our room. But my earliest memory is of him listening to Maurice Ravel’s Bolero, and pretending to be an African hunter, tracking his prey. I remember sitting on the couch, watching him act out this drama over 15 minutes without saying a word. The most exciting part, which came at the very end of the piece, was when he would mime throwing his spear, which was a broomstick. [Laughs] I learned how to tell stories by watching him. It’s indelibly inked in my mind.

ArtsATL: Learning that something as abstract as music could convey a story was quite a lesson for a child.

Marie: I loved that he chose to tell the story of an African hunter. He tapped into our roots to see how a quintessentially Italian art form could apply to us as well. I lived under Jim Crow laws the first 10 years of my life, but my father was sending me a big message without a lecture.

ArtsATL: You were born in Warrington, Virginia, raised in Roanoke, and have lived in Atlanta and a suburb of Denver. Does place inform your music and sound in any way?

Marie: My most creative time was the six short years I spent in Colorado. During that period [starting in 2005], I was composing music; wrote a one-woman play Slut Energy Theory; was in another play about the life of Dinah Washington; and designed a vocal workshop. The very first time I came into the city, I had the sense that there was another part of me waiting there for me to arrive. I think I must have lived there another time. Something just called me there. ArtsATL: Career-wise, you’ve changed course a few times. Is your singing career an example of saving the best for last? Or will there be another act?

Marie: There wasn’t really a plan to all of this. I sang in an R&B band as a teenager for one or two years — and constantly sang around the house after having my children — but my goal was to be a lawyer. When I was in my early 40s, my son called me from a local restaurant one night and said, “Mom, this woman is singing all the songs you sing at home, and  she’s terrible. You need to be up here singing because you are so much better.” That was when the idea was planted in my head. But my next thought was: I’m too old; nobody could start doing this in their 40s. I don’t know if you have kids, but they can be very convincing sometimes.

ArtsATL: What was your repertoire around the house?

Marie: Anything! I had the radio on a lot; there was music all the time. When my sons were babies, it might be Sesame Street songs, or something I’d made up for them. There were three jazz albums by Ella Fitzgerald, Sarah Vaughan and Cleo Lane that I played the most. And I had stuff by Phoebe Snow, Roberta Flack, Nina Simone . . .

ArtsATL: Did you have any formal training as a vocalist?

Marie: No. I had two years of lessons on the piano when I was in the fourth grade, and then again when I was about 15.

ArtsATL: What do you think your son heard that you could not hear before finally heeding his advice?

Marie: Joy! I got just as much pleasure singing at home as I do singing onstage now. It’s really no different. I am having fun, and getting into the song, just really getting down to the nitty-gritty of the lyrics, and sometimes the story behind the story of the lyrics. The restaurant singer was just bored with the music she was singing. Her musicians weren’t really paying attention to her, and the people who were supposed to be listening were talking over her. She was singing these great jazz standards, but wasn’t telling the story. I thought that was just a travesty that such beautiful and meaningful lyrics were totally going to waste. I think that’s what my son also heard.

ArtsATL: The beauty of standards is the built-in familiarity, but the challenge of making a song like Cole Porter’s Let’s Do It sound fresh cannot be easy. How do you do it?

Marie: It’s so easy, when you come up with an idea, for the next thought to be, Naw, that’s crazy. I shouldn’t do that. But I try not to edit any of my thoughts regarding a song. I try to look at it with brand new eyes. Sometimes, I’ll write the lyrics down and ask myself, “If I didn’t know how the melody went to this, how else could I sing it?” Sometimes, just the way the meter falls as you sing the lyrics can inform the way the song can be presented as well.

ArtsATL: What do you think you’ve gained by having led a full life before becoming a professional singer?

Marie: Experience, and being able to say no. I’ve seen so many young singers just be willing to do anything because [singing] is all they’ve ever done. By the time I started singing, I had worked at a bank for seven years, progressed from being a teller to training customer service reps, and liked the work a lot. I knew who I was, what I wanted and whether to trust someone or not. I could tell if people were full of it or if they were sincere. ArtsATL: At one point, when you were contemplating a career change, your brother encouraged you to just “jump, and the net will appear.” What was your gut reaction when he said that to you?

Marie: I hadn’t been divorced from my husband for six months before my brother way telling me to quit my day job. My first thought was, Yeah, right! But he said it to me every day until I ran out of excuses.

ArtsATL: Did your first marriage not survive because of your career?

Marie: I met my ex-husband when I was a teenager and we were both members of an R&B band. Decades later, when I started singing again, he took advantage of religious teachings [Jehovah’s Witness] that the husband is the head of the household. In hindsight, it was about control. As I was on my way out the door one night, he said “If you go to this gig and come back, you’re gonna have hell to pay.” At that point, I realized it wasn’t about how singing was in my blood, or how I just had to do it. My only thought was, Do I want to live the rest of my days married to somebody who thinks it’s OK to threaten me like that? I started packing my bags, and that’s when he got physical with me. I have never felt so much fear as I did in that moment. After it was all over, we were both on the floor, breathing hard, crying, and I asked him, “Are you finished?” Which was really bold for me to say. He said he was, so I got up off the floor, picked up my suitcase and my music, and I left. I was scared to death. I didn’t know where I was going to go. Mind you, if my husband had been real sweet and loving and said, “Sweetheart, I never get to see you anymore” or “I hardly get to see you in the evenings. I thought we were going to spend our empty-nest time getting to know each other better and doing things together,” I would have said okay. But the universe knew just what I needed to hear. As the years went on, I realized he had done me a favor. He had said exactly what I needed to hear for me to break free and do this amazing thing that has brought me so much joy for the past 20 years.

ArtsATL: Music can tell a story, but if the human voice is inexperienced or uninformed, the story will fall flat. What life experiences, for better or worse, have you had that give your voice its color or texture today?

Marie: My emotional equation is: Pain + Wisdom = Beauty. Now, you can have some pain, but if you’re not wise enough to learn from the pain, it does not result in beauty. It just results in more pain.

ArtsATL: It takes courage to change your mind, embrace the unknown and risk failure — as you did when you took your brother’s advice and jumped without a net. Have the rewards been worth the risks?

Marie: Anytime we answer the tone that resonates within us — and live in accordance with what our truth is, who we should be around and the things that bring us joy — I think the more authentic we are. Definitely, the happier we are. And I think the universe supports that. But if we’re not in tune with that internal tuning fork, we will have very few rewards. There’s risk in everything. I don’t think the risk was any different than if I’d embraced the safety of my full-time job at the bank and risked losing myself in the process.

ArtsATL: What can fans expect when you come to the Rialto next week?

Marie: What can you expect? A lot of fun! I’ll be appearing with the Georgia State University Jazz Band. Playing with a big band is like riding a train where the band is the engine. They have certain lines to play, and they are not going to deviate from those lines, but there’s a playfulness that can happen in this seemingly rigid musical environment. As a singer, you’ve gotta figure out how to get your stuff in, then get out the way, and then jump back in, and get out the way. I really enjoy the back-and-forth, and interacting with the audience, especially while the big band is playing what they call the “shout” part, where the horns are just wailing. We’ll perform standards like C’est Ci Bon, Lover Man (Oh, Where Can You Be?) and I’d Rather Be Burned As a Witch. Hopefully, we’ll also have time to include my favorites like Take My Breath Away, Vertigo and I Like You.

ArtsATL: What do you get from your audiences that they might not be aware of but that you’d like them to know?

Marie: Each one of us is changed by what the other one is doing, and that’s what’s happening to us onstage. There are times when we are giving everything we’ve got and just don’t feel it from an audience. When that happens, all the musicians realize it. We don’t have to say it to each other. But when the audience is responsive, emotionally, you can feel it. I can feel it. We all sense it. We can tell.