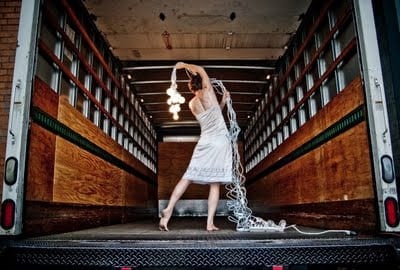 Castleberry Hill is the place to be on Friday night. Le Flash, the one-night art/performance/dance/fashion lollapalooza, will take over its streets and alleys, storefronts and rooftops from dusk to midnight.

I’m excited — not only about what Cathy Byrd and Stuart Keeler have put together for their sophomore Le Flash event, but also by the energy and synergy an annual Le Flash can create.

If you want a preview of one of the 60-some projects, check out “Palimpsest Portraits” by Neil Fried and Monica Duncan at Marcia Wood Gallery.

The series of short videos glowing on the monitors represent the initial stage of an ambitious work-in-progress: a novelistic installation that intermingles live performance and video projection.

You’ll get an inkling of their vision on Friday night, when live performances in the gallery driveway will be filmed and projected on a large screen in the back yard.

The Atlanta artists are in the first phase, the creation of the characters. They’ve asked artists to create profiles, which they then incarnate as short videos you see here. “We’re looking for ways to make a portrait that reveals more than a still,” says Fried.

He and Duncan directed and coached the actors, then filmed them using software they developed that merges real-time and past footage. The software creates palimpsests, as it were, with the past intruding on present, present rubbing out past.

(Here’s Fried’s explanation of the software: “…Real-time computer processing ‘siphons off’ portions of the video stream into a reservoir from which it is reintroduced to the live video feed. The two streams of video–that being captured in real-time and that from the reservoir– interact according to luminosity parameters resulting in fades, fixes, and combinations.”)

In the next phase, the characters collaborate with each other to create a back story, a history of their relationships and interactions. The physical form that might take is suggested by two videos that merge footage from the portraits to lush effect.

The gallery also hosts a serene aesthetic experience in Duncan Johnson’s elegant “paintings” made from strips of old wood.