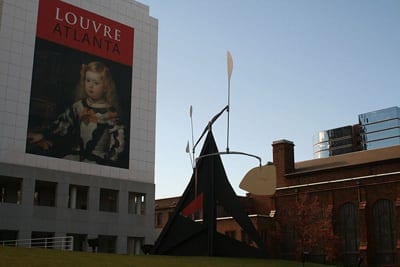 Coming to an arts multiplex near you: Louvre Atlanta (Part Deux)

Editor’s note: As a forum for arts and ideas in Atlanta, ArtsCriticATL.com opens the floor to colleagues whenever possible. With this essay, we’re pleased to welcome critic and curator Rebecca Dimling Cochran. She is a longtime surveyor and participant in the city’s visual arts scene, and her reviews of Atlanta artists appear in national publications such as Art in America, Artforum.com and Sculpture. She is currently curator of the Wieland Collection, the private collection of contemporary art owned by homebuilder John and Sue Wieland. — Pierre and Catherine

The farewell gala for the High Museum’s Louvre Atlanta project came with a surprise announcement: Louvre Atlanta Part Deux may be in the works. Henri Loyrette, the Paris museum’s director (top photo), said that the collaboration had been so successful that he and High director Michael Shapiro were busy cooking up another one. There were a number of successes but some serious failures with this project, and I have to wonder whether this is a good idea.

Shapiro made a strategically wise decision to sign a three-year engagement for “The Louvre in Atlanta.” As Cathy Fox points out in her September 4 post, the collaboration put the High at the “leading edge of a strategy of art-sharing that benefits institutions both object-rich and object poor.”

It was logistically smart as well. Institutions traditionally have difficulty ramping up to fill as much new space as the Renzo Piano renovation included. With this project, Shapiro had three years of programming planned and at a relatively fixed cost. The Louvre’s cachet didn’t hurt either.

The first year’s shows were wonderful. They worked like a good family movie, which offers one storyline for the kids and a second for the parents. For the art novices, “The Kings as Collectors” (above) and “The King’s Drawings” (below) provided an opportunity to see some fabulous paintings and old master drawings. The connoisseur could see how the kings’ choices created the canon for the next generation of French artists.

“The Decorative Arts of the Kings,” which replaced the drawings halfway through the year, also played this dual role. While the technical virtuosity of the tapestries, silver, porcelain and furniture was readily apparent, as my daughter’s Brownie troop discovered, the objects also said a great deal about how people (albeit very wealthy ones) lived over 200 years ago.

Unfortunately, in the second year the exhibitions began to fall apart.

During a talk in Paris, Loyrette gave an important clue as to why. He described inheriting an institution run as a series of curatorial fiefdoms, with each individual department (sculpture, painting, prints and drawings, Near Eastern antiquities, decorative arts etc.) run by protective curators vying for money and space. He was excited that the High’s project would force his curators to collaborate and mix their collections.

While the first show focused on paintings, drawings and decorative arts, each curator was given his or her own space and allowed to put together exhibitions from their own collections. In the second year, the curators of Egyptian antiquities and Greek, Etruscan and Roman antiquities had to share the space with one another under the aegis of “Ancient Art and Archeology”. Granted there were some beautiful objects, but the intelligent curatorial connections among the works were lost.

This was particularly evident in “The Eye of Josephine,” which showed works that were once assembled at Malmaison, her home outside Paris. Taken out of the context of the residence, the objects looked just like what they in fact were: a mishmash given to Napoleon by the king of Naples in the hopes that his country would not be looted by the emperor’s encroaching troops.

This last year was the biggest fiasco. When the Louvre partnership began, our press packets billed the final year of programming as “The Louvre of today and tomorrow.” The show was to exemplify “the impact of the Louvre’s collections on the art world today.” The late Coosje van Bruggen, artistic partner of Claes Oldenburg and a curator in her own right, was asked to put together the exhibition. Her idea was to trace the genre of the still life through time. Anyone who has seen Oldenburg and van Bruggen’s installation in the Wieland Pavilion at the High Museum, “Balzac Pétanque,” 2002, can envision how well this could have worked.

But it didn’t. While the High did not comment on the change after repeated requests, van Bruggen told me during an interview for an article published in the June 2007 issue of Art and Antiques that the project fell apart when the Louvre refused to loan works she felt were important to the premise of the show. Instead, we got “The Louvre and the Masterpiece,” which the museum proudly touts as “ninety-one works of art drawn from all eight of the Musée du Louvre’s collection areas, spanning 4,000 years.”

This loose assemblage of objects was frankly farcical, a point that is readily apparent when you compared it to the smaller sub-show devoted to old master prints from the Rothschild Collection. This tightly curated room is beautiful, educational and intelligent. In contrast, the main exhibition pulled together unrelated objects from different fields that had nothing in common other than the word “masterpiece.”

Additionally, the works were not nearly as strong as in the previous shows. I’d be curious to know how many of them are still considered masterpieces today. How many are so valuable to the Louvre that they were taken off display? How many came from storage?

Herein lies the crux of the problem of borrowing exhibitions from other institutions: We get only what they want to give. These shows were not the High curators thinking about the context of what Atlanta knows, deciding on a theme that may connect to something else recently shown, and putting together the strongest exhibition possible.

Instead the shows were assembled by curators who were balancing our requests with the needs of their own public and exhibitions for a number of other museums as well. A quick romp through the Internet showed that simultaneously with our project, the Louvre also produced the “Louvre Museum Treasure Exhibition- Ancient Greek Art” in 2007 at the Capital Museum in Beijing; “Artisans & Kings: Treasures From the Louvre,” 2007-08 at the Denver Art Museum; “Le Louvre a Quebec,” in 2008 at the Musée Nationale des Beaux-Art du Quebec; “Roman Art From the Louvre,” in 2008 at the Seattle Art Museum and the Oklahoma City Museum of Art; and “The Louvre Museum Exhibition: 17th C. European Masterpieces,” at the National Museum of Western Art & the Kyoto Municipal Museum of Art in 2009.

We all understand the financial strain being put on nonprofit institutions, and with 1.3 million viewers coming to see Louvre Atlanta, it is hard to argue against these “blockbuster” shows if we want the doors to stay open. But the High Museum will always have less curatorial control over exhibitions borrowed from other institution than ones it originates itself. The High has already signed a contract with New York’s Museum of Modern Art for a series of exhibitions borrowed from its holdings and we have three years of experience working with the new building under our belt. Isn’t it time for the High to come out of the shadows of these big-named institutions, invest the financial resources it so readily exports in its own curatorial staff, and produce its own scholarly and curatorially sound exhibitions?