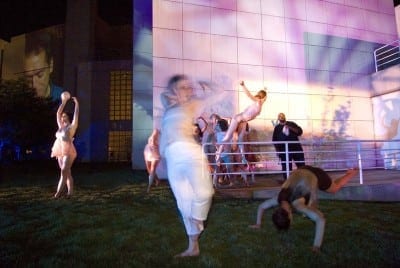 On Friday evening, “rapt” emerged from the union of choreographer Lauri Stallings’ collaborative performance group gloATL and the Woodruff Arts Center’s Alliance Theatre. The first of its kind at the Woodruff, the site-specific multimedia event was inspired by, and designed for, the arts center campus.

It wasn’t the first site-specific choreography to be performed in Atlanta, and certainly not the first time a dancer responded to the outdoors with an impulse to create a dance that fit the space. But “rapt” opened the city to an entirely new world of possibilities, flooding the Woodruff plaza, and the senses, with innovative choreography, moving images, color, sound and poetry. Though the elements didn’t always mesh, when they did, it was — to borrow Stallings’ expression — delicious.

Central to the creation was Stallings’ intriguing vocabulary developed using Gaga technique, a system for movement exploration she learned from Ohad Naharin while dancing with Hubbard Street Dance Chicago. During the past four years, Gaga has informed Stallings’ choreography, including Atlanta Ballet’s multimedia collaboration with Big Boi Patton, “big,” and a recent commission for American Ballet Theatre, “Citizen.” Through Gaga, Stallings seems to have tapped into deep and subtle impulses. It’s as if the body is responding to an inner dance that has its own life, rhythm and intelligence. And while Stallings’ dancers have trained in the geometric lines of classical ballet, their range of movement — and expression — bursts out of that framework with the energy of a new generation defining itself.

Like an irrepressible child, Gaga-based movement cries out for structure — for straight lines to frame its surprising curves and meanderings. And the Woodruff plaza’s open-box shape and surrounding gridlines beckons to dancers — to explore possibilities in and around those defining lines.

The relation was clear in Toni Doctor Jenkins’ opening solo. Framed on three sides by building walls, Jenkins traversed a grid of pavement squares in a progression of sporadic impulses, gestures and weight shifts that sent the body in every direction except along square, familiar lines.

Slow, circular movements later transformed dancers into creatures seemingly out of a child-like fantasy. To an enchanting Cirque-style waltz, the creatures drew us in to their world, then branched out into ours, offering flowers and moving among us. At times, however, the lack of lighting — perhaps to create a sense of mystery — just made it hard to see.

But then came “Oceana,” a section of gratifying unity, set to Golijov’s string quartet “Tenebrae.” Dancing figures crept up the walls like vines on a trellis, then cast shadows on colossal images of a dancer’s elegant, rippling back, a woman’s hands encircling an invisible energy source. As figures dispersed into the surrounding darkness, Jenkins, on a pedestal lit from beneath, in front of the Roy Lichtenstein’s “House III,” bent into spiral shape, her hands, too, encapsulating energy. A deep, resonant, solo melody echoed her aloneness as figures moved nearby, but unseen — there, but not with her.

Revisiting “big,” Big Rube from the OutKast/Dungeon family (standing at right in photo) delivered his def poem “Ruby 4”. Though oddly juxtaposed with Gaga-based choreography and Bach’s Prelude in C Major, video images of Atlanta’s many faces brought our attention home — to our city — with a call for unity.

Gaga took on a bit of boogie rhythm as the crowd was invited to join in a celebratory dance. Nicole Johnson Gaga-boogied with one of Atlanta’s finest ballet dancers, who seemed to struggle to break out of the classical lines so ingrained in his movement.

Later, a girl of about five or six joined Johnson. As she danced, the child followed every subtle move — and she understood.

Let’s hope that more of gloATL’s creative impulses, honed by its artists, will take shape on the Woodruff plaza. As the relationship grows, perhaps they’ll show us even more ways to meander off the grid.