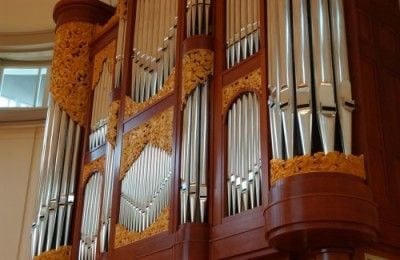 Emory University announced today its 2009-2010 pipe organ series. All the recitals are free. Most will be performed on Jaeckel Op. 45, a 54-stop, 3605-pipe mechanical-action instrument in Emerson Concert Hall.

I love organ recitals. Music by Bach sounds more enriching and spiritual on the organ than on any other instrumental combinations, and organ composers aren’t afraid to sometimes pile high the weird harmonies and dissonances. Coupled with the high volume and room-rattling power, a good organ concert never fails to make your head spin, a giddy experience. I’m not sure why the picture Emory folks sent me is a photo-negative, in blues instead of reds and golds, but it looks like the instrument sometimes sounds.

Indeed, the Jaeckel organ is one of the most satisfying of the newer instruments around town, and it’s been featured on public radio’s Pipe Dreams. (Note that the Nov. 8 recital is in Glenn Memorial Church.)