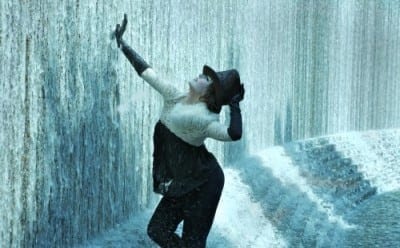 “This ain’t Buckhead,” a stranger called out as a flock of contemporary dancers clad in black infiltrated downtown Atlanta’s Robert W. Woodruff Park last month. It was their first on-site practice of “Hinterland,” and at the moment it was clear that this would be a distinctly different 360-degree world. Next Saturday, November 27 at 7 p.m., Lauri Stallings’ gloATL will join Antwan “Big Boi” Patton of Outkast in the new site-specific work, which aims to “ignite” Atlanta’s historic city center through dance, light, music, multimedia and aerial performance.

Big Boi and Stallings have teamed up with costume designer April McCoy, lighting designer Ryan O’Gara and projection artist Adam Larsen — the first time all five have worked together since Atlanta Ballet’s “big,” in 2008. Unlike “big,” this outdoor happening is free to the public, produced by Luminocity Atlanta, Kelly Nelson’s production company. 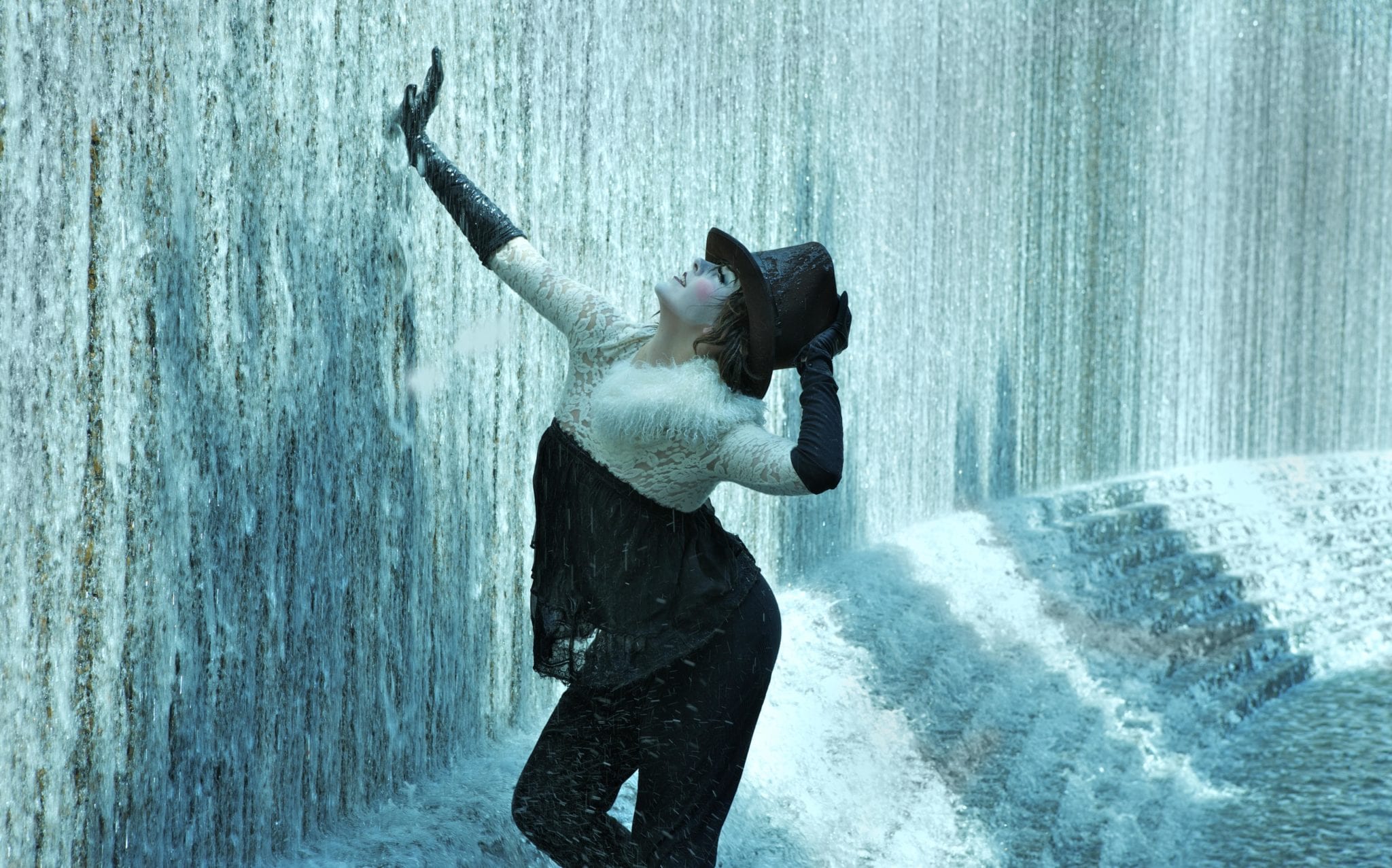 For just under an hour, some 40 dancers will perform a multi-textured work, inspired by Balkan culture, interwoven with songs from Big Boi’s new album, “Sir Luscious Leftfoot and the Son of Chico Dusty.” A light-based parade — Stallings calls it a “migration” — will then coattail around Peachtree Street toward the World of Coca-Cola for what’s billed as a spectacular finale. Stallings hopes the event will help Atlantans rethink possibilities for the underutilized park and help redefine the community’s identity.

As Atlanta writer Jim Auchmutey explained to me in an interview, the park has had its own identity struggles since Coca-Cola magnate Robert W. Woodruff gave the six-acre plot to the city in 1971, responding to a perceived need to define the city’s center and keep it healthy. When the park opened, the city’s movers and shakers — “virtually every law firm that mattered,” as Auchmutey put it, and three major banks — were within five blocks of the postage-stamp park. Over time, much of that activity relocated to Midtown. Historic buildings were torn down and two of the banks merged out of existence. Despite the continued downtown presence of some businesses, government offices and Georgia State University, the park is now perceived largely as a place overrun by homeless people and panhandlers. The city has remodeled the park twice, part of a cyclical struggle to keep it clean and safe for the general public while respecting the rights of street people.

Stallings taps the grit and coarseness of homeless life via Balkan- and Gypsy-inspired music by indie folk group Beirut and composer Boris Kovac — part of her impression of the park as “a mosaic of subcultures.”

“The first day, I felt as if at any given point, I was walking into a different country,” Stallings said. 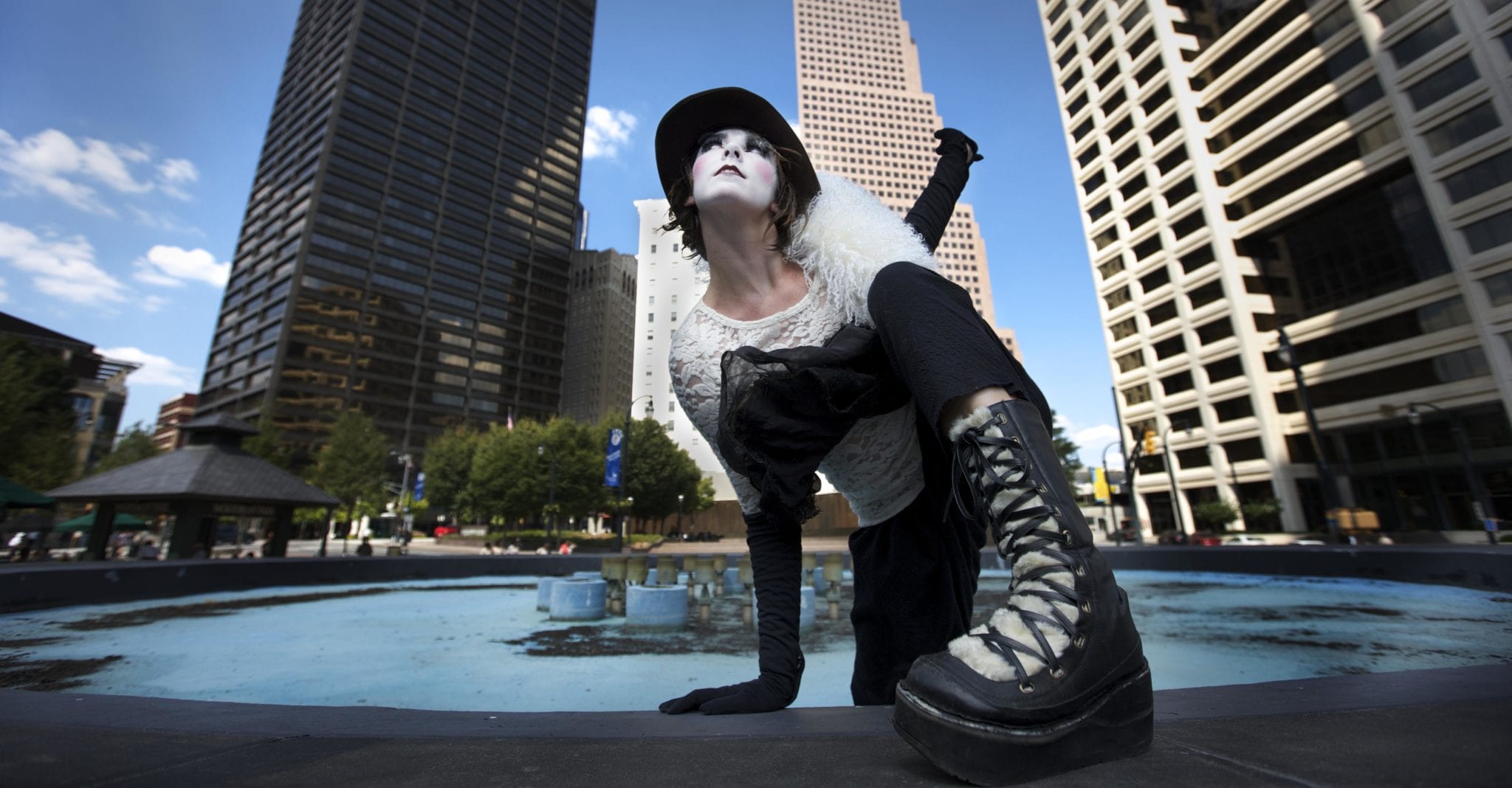 Balkan cultural influences took hold as inspiration. “You have eight or nine countries that are so vastly different,” Stallings observed. “But this region is terribly connected, and a little claustrophobic. The [smaller] regions seem to challenge one another. There’s such a range of expression, conflict and points of view in their culture, religion, politics.” She saw similar dynamics in Atlanta — which she calls “an unusual carnival.”

Beginning at the Rialto Center for the Arts, the dancers will stride to a soulful, earthy march played on drum, tambourine, out-of-tune piano and brass through the streets to the International Peace Fountain at the park’s southern end. As they move northward through the park, Larsen’s images will appear on “flag tails” hoisted onto the park’s flagpole. And if all goes well, he’ll also project images onto the Candler Building. Live video of the performance will be projected onto a huge canvas stretched across the face of the building at 55 Park Place. As the dancers reach the park’s newer section north of Auburn Avenue, they’ll enter what Stallings calls a lighter “clear world.” Megan Mueller will perform an aerial dance suspended in the Candler Building’s vertical open space, her traditional-style tutu hanging 20 feet below her.

In a series of vignettes, Big Boi will perform several pieces, culminating with a song from the top of the park’s water wall. Afterwards, dancers — as “Hinterpeople” — will “flood” to the grass and to a 50-foot dining room table, to be joined by the rap star as “Professor Gulag,” and, Stallings explained, “We’ll ignite the whole space.”

Stallings’ choreography, too, will be multi-layered and multi-textured. Like an ever-shifting sculpture built on the armature of classicism, bones shift and new pathways surge through the body and into the surrounding three-dimensional space, resulting in original forms as rhythms shift from steadily driving to unpredictable, as if responding to an inner flux of energies and feelings.

This distinctive way of moving honestly, “from the inside out,” can affect people at a deep level and indeed, Stallings feels, can alter the way people perceive the space in which her work is performed. “We believe any space can be softened and turned into a porous environment,” she explained. “We know how to do this. It’s a beautiful space that’s been overprotected and underestimated. Great things happen when you don’t underestimate people and spaces, people and places.”