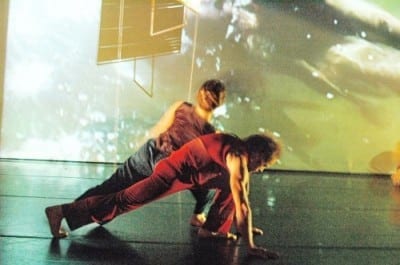 In Mayan weaving, the “Corazón Abriendo (Heart Opening)” refers to the moment when a weaver pulls apart two layers of thread to create an opening where the batten passes through. For co-directors Sue Schroeder and Susan Prins, it also represents a portal between worlds and cultures, part of the Mayan cultural immersion that inspired their collaboration. Last night at the Balzer Theater, CORE Performance Company celebrated its 30th anniversary with “Corazón Abriendo,” an extended revision of a work that received its premiere in 2006.

Through traditional and contemporary media, “Corazón” intertwined the art of Mayan weaving with the ancient culture’s music, dance, myth and natural environment. Though “Corazón” did not always transport the audience into this world, it delivered what it promised: an intelligently conceived tapestry of music, dance, mobile sculpture, video and text, offering multiple perspectives on an ancient culture. 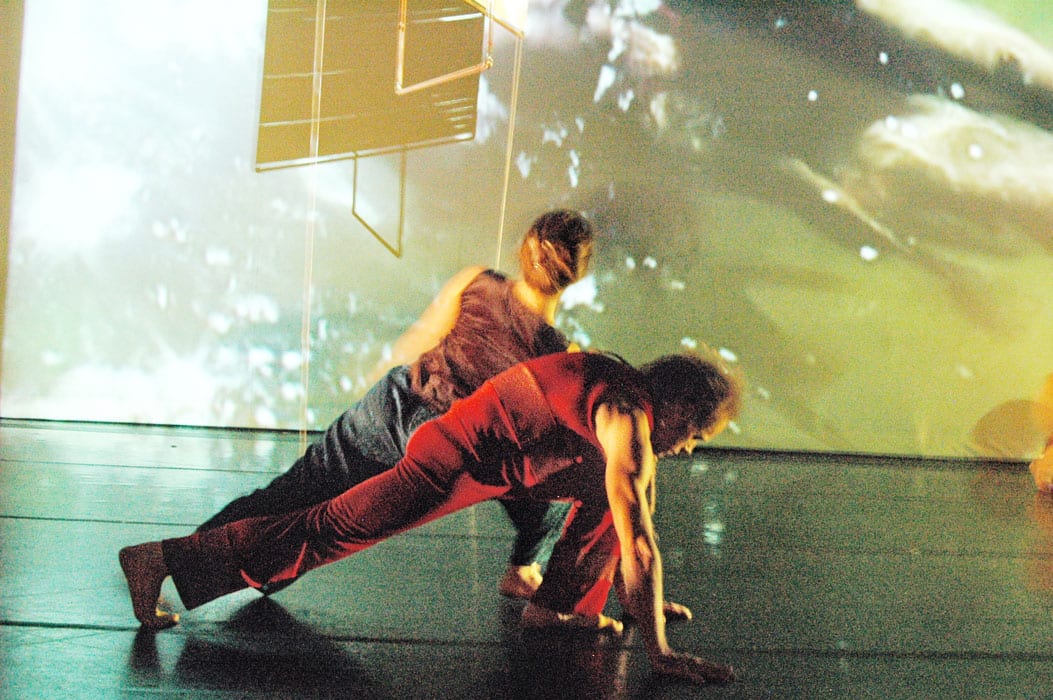 Composer, musician and dancer Terrence Karn performed his score, the work’s lifeline, threading music, natural sounds and storytelling throughout. Consistently supportive but unobtrusive, Karn moved gracefully around performers, weaving accordion tunes and percussion into the texture of his pre-recorded score.

Walter “Chip” Morris Jr.’s mobile sculptures were suspended above the stage — one of wooden battens, the other a cluster of several rectangles made of thin pipes. One of these served as a rotating projection screen. The rectangles rotated like celestial bodies, shadowed on the scrim behind. On the floor, rectangular frames served as a moving portal, another as a projection screen. (Photos by Dennis Diamond.) 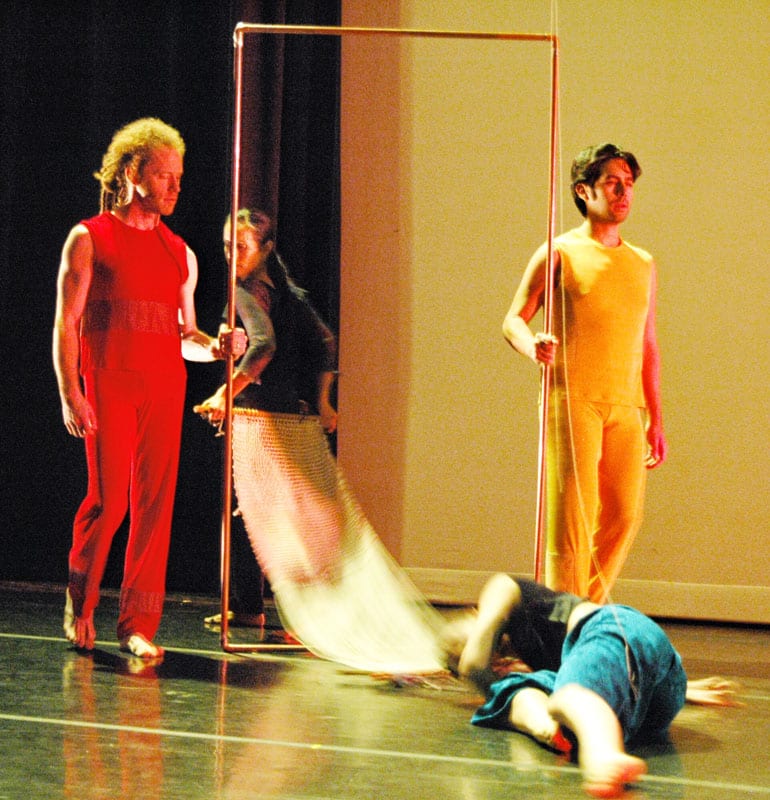 A vast night sky lit the scrim, and then five dancers spread across the stage, connected by colored threads, suggesting a constellation and the idea of the stars as portal into a culture’s mythology. A Mayan creation myth was narrated with images of ocean waves swirled behind the dancers.

Wooden battens — machetes in Spanish — were integral to the work, used in Mayan daily life to lay out rows for planting, cut through the jungle, attack and defend, and send colored threads through the corazón abriendo when weaving. Martial artist Blake Dalton moved with impressive speed and precision, spinning and lunging as he twirled and slashed the machete.

Dancers exchanged support (a technique this company does especially well), circling over one another’s backs. Limbs traced arcs through the air as they rotated and revolved around each other. In canon, one-handed cartwheels folded into kneeling crouches which sprang into high, suspended jumps and fell, sliding out across the floor. Above, a film of master weaver Lucia Hernández López appeared on the rotating screen, speaking of the dying art.

In a powerful solo, Schroeder, seated alone on a bench upstage, balanced on one hipbone with her arms and legs lightly suspended in the air. She leaned to one side and slowly lowered herself toward the bench, like a gentle, frail old woman who possesses deep strength. Claire Molla embraced a bundle of battens, casting a long shadow behind Schroeder that connected her to earth and sky. 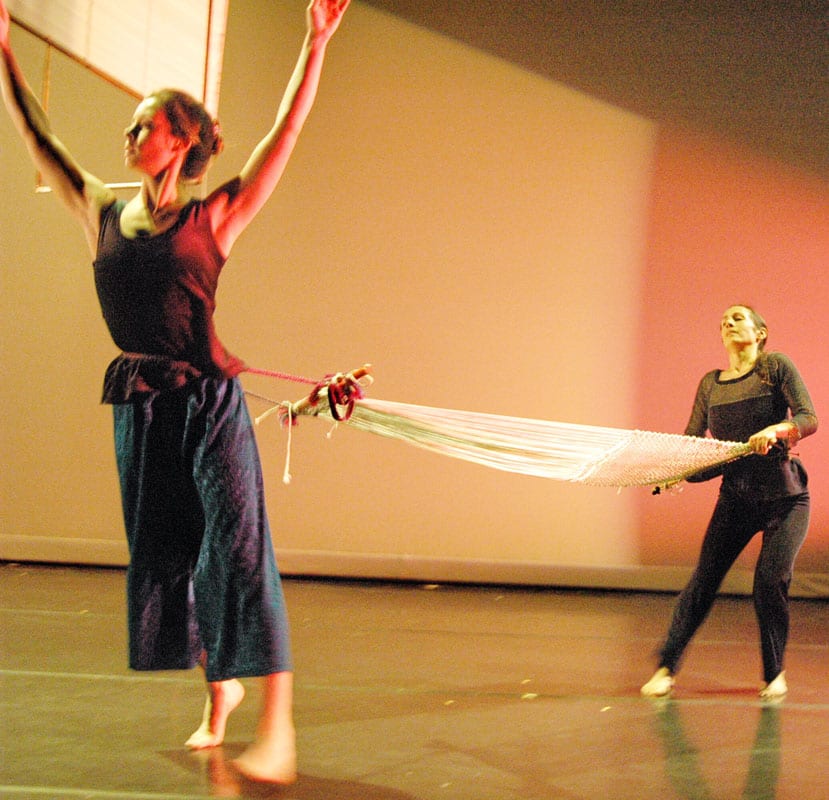 Though many parts of “Corazón” opened windows into a world of Mayan culture, I never felt transported there. This may have been due to unclear direction. Dancers often seemed to be directing themselves; their individual intents rarely merged into stronger, singular currents, and this revealed small inconsistencies in technical training.

Still, any modern/contemporary dance company that can survive in Atlanta for 30 years must be doing a lot of things right. CORE’s Decatur studio is a hub of dance activity, offering classes and residencies and reaching out to the underserved. Most company members also choreograph, teach and perform other choreographers’ works, spawning more creativity in the dance community.

But I couldn’t help but think of recent changes in the city’s dance landscape. Lauri Stallings’ gloATL has set a higher bar for contemporary dance; growing college dance programs and young presenting organizations are raising artistic standards. Even though CORE is central to the local dance community, I wonder, has the company become so diffuse that it’s in danger of losing its center?