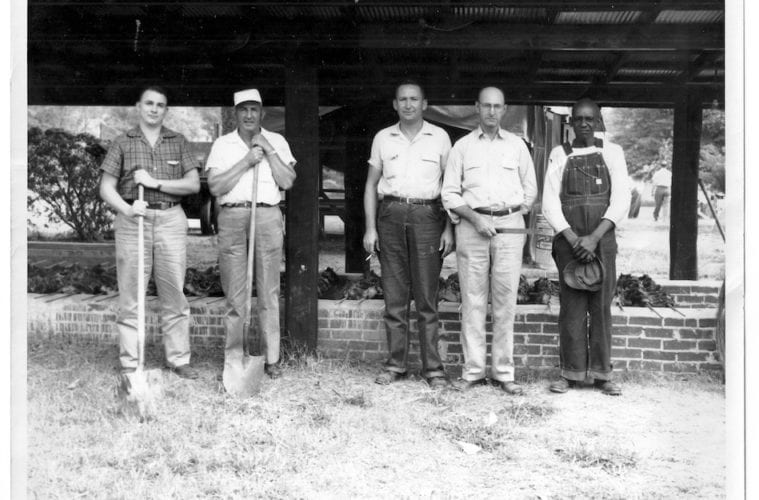 Jim Auchmutey, author of Smokelore: A Short History of Barbecue in America, comes from a long line of barbecue aficianados, including his grandfather Bob Auchmutey, pictured here with his pit crew, second from the right. (Photos courtesy of Jim Auchmutey)

Jim Auchmutey reflects on family and BBQ folklore in his upcoming book, Smokelore

Jim Auchmutey knows a bit about writing a compelling story. He spent 30 years working as a writer and editor at the Atlanta Journal-Constitution, during which time he was twice named Cox Newspaper’s Writer of the Year.

Perhaps the only thing Auchmutey knows more about than writing is food — specifically, barbecue. He’s a founding member of the Southern Foodways Alliance, and his food writing has garnered him accolades from the James Beard Foundation and the Association of Food Journalists. Auchmutey was also a guest curator of the Atlanta History Center exhibition Barbecue Nation and the author of two cookbooks, including The Ultimate Barbecue Sauce Cookbook.

It’s his newest book, Smokelore: A Short History of Barbecue in America, though, that most effectively combines Auchmutey’s skills as a writer and his expertise as a barbecue junkie. Smokelore takes readers on a journey through the “delicious and contentious history of barbecue in America . . . . It’s a spicy story with cameo appearances by notable people like Georgia Washington, Abraham Lincoln, Elvis Presley and Martin Luther King, Jr. But most of the tale was authored by generations of ordinary Americans who made barbecue the closest thing we have to a national dish.”

Auchmutey will speak about Smokelore at the Atlanta History Center on Thursday, May 23, and give a talk about barbecue and politics at the Jimmy Carter Presidential Library on June 25.

In the meantime, whet your palate with this essay about books and barbecue that Auchmutey penned exclusively for ARTS ATL. I knew about barbecue before I knew how to read or write.

My earliest food memory that doesn’t involve flinging Gerber mush at a wall concerns barbecue. When I was about five, my mother would pack her four children into the family’s green ’53 Chevy and go to Lefty’s, a barbecue drive-in on Candler Road between Atlanta and Decatur. We’d order curb service and wait on our pork sandwiches for what seemed like forever, getting hungrier and hungrier as we smelled the hickory smoke drifting out of the chimney. It was the first time I was aware of my mouth watering and my stomach growling. I was learning a crucial lesson of food writing: Thinking about a meal is as important as eating it.

I remembered that aroma and that tingle of anticipation as I was working on my new book, Smokelore: A Short History of Barbecue in America, and it made my mouth water all over again.

Food is powerful. It’s wrapped up in memory and emotion and family ties. I think that’s especially true of barbecue, one of the most evocative foods imaginable. I tried to capture that feeling in the book.

Smokelore, which is being published on June 1 by the University of Georgia Press, isn’t a cookbook or a barbecue travelog or an academic monograph, although it does have elements of those. It’s a lavishly illustrated popular history, with 50,000 words of text, 26 recipes and 208 pieces of artwork, many of them vintage photos and amusingly retro magazine ads. It’s the companion volume to the Barbecue Nation exhibition — for which I was a curator — on view through September at the Atlanta History Center.

My central contention is that barbecue — much more than apple pie — is our true national food. It goes back to the earliest encounters between European explorers and indigenous populations in the New World, and involves almost every aspect of our history, from the colonial era to slavery to the settling of the West, to the rise of the automobile, to the expansion of suburbia, to the more recent rediscovery of craft and tradition. With roots on five continents and in almost every ethnic thread that makes up our nation, barbecue embodies America better than anything else we eat. One of the biggest reasons for that mystic connection is family. When I was writing Smokelore, I was struck with how many barbecue traditions had to do with kinship. Almost every famous barbecue restaurant involves a family dynasty. The community barbecues that established America’s love for the genre often revolved around family. The backyard barbecues that are such a feature of our culture now are all about family and friends.

My interest in barbecue certainly has to do with family. I was probably destined to write this book because I do believe there are pigs in my family tree.

On my mother’s side, the Yarbroughs ran a meat-packing business in Washington County, Georgia, that specialized in country sausage. When I was a boy, I saw hog carcasses hanging from hooks and watched in fascination as they were processed and fed into loops of casing or rendered into crackling and pork rinds. I loved going out with my uncle, W.J. Yarbrough, as he loaded his small refrigerated truck and delivered the sausage to mom-and-pop groceries through the middle Georgia countryside between Milledgeville and Augusta.

Every now and then, he’d host a pig-pickin’, smoking a whole hog in an open shed overlooking a pond beside his house. He served it with jugs of a vinegary barbecue sauce that had to be shaken vigorously to distribute the sediment of pepper and spices. It was a Carolina-style sauce, I now know, not uncommon in the eastern provinces of Georgia.

On my father’s side of the family, the barbecue lineage was no less pronounced. My great grandfather, James Auchmutey (for whom I’m named), ran a gristmill in Bartow County and oversaw the pits and Brunswick stew pots at community barbecues between Cartersville and Rome. We don’t have a photo of him, but as my father always said, we have his stew recipe, and that’s not a bad substitute. It was my grandfather, Bob Auchmutey, who was our most noted pit master. Daddy Bob was a tenant farmer and later a fireman in Cartersville. From the 1930s to the ’50s, he cooked pigs, sheep and goats at church barbecues and sheriffs’ barbecues throughout the Etowah River Valley. In 1954, the Saturday Evening Post did a five-page spread on Southern barbecue titled “Dixie’s Most-Disputed Dish,” set largely at the Euharlee Farmers Club barbecue, an annual gathering that dates back to the 1800s. My grandfather ran the pit there for years and appears throughout the story and in the lead photograph.

After that publicity, Daddy Bob was invited to stage barbecues all over the place. He went to suburban Chicago and cooked a barbecue for 2,000 people, an adventure that was written up in the Cartersville newspaper under the tongue-in-cheek headline “Rebels Cook Southern ’Cue In the Very Midst of Yankeeland.”

Around that time, he posed for a portrait with his pit crew. I love that photo. You can see my Uncle Earl on the far left, a slight smirk on his face, and my grandfather, second from the right, looking rather solemn as he stands there with his butcher knife. The man took his barbecue seriously.

His grandson does too — although I’m much more apt to smile about it.