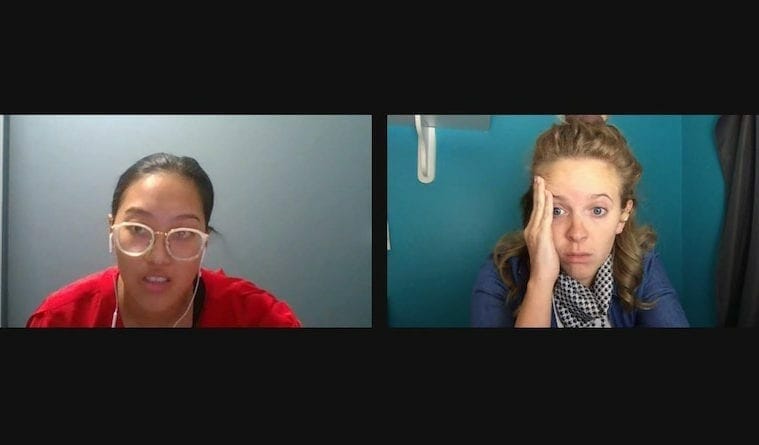 Since the COVID-19 pandemic hit in March, we’ve lived in a world of video squares, frozen faces, dressing for work from the shoulders up and listening to choruses of “I think you’re muted.” Why, then, shouldn’t the stories we tell reflect, rather than avoid, our reality? That question — and the tension between technology and human connection — lies at the heart of Interface: An Evening of Six New Virtual Plays (December 4–6 ). It features live theater pieces of 15 to 20 minutes each written specifically for the digital format. Bridgette C. Burton coproduces the six short plays about the tension between technology and human relationships.

The evenings are coproduced by Bridgette C. Burton and Kelundra Smith (an ArtsATL contributor) with a grant from the Fulton County Board of Commissioners’ Virtual Arts Initiative. Once the two secured the funding last summer, they commissioned six playwrights to create new work that uses chat boxes, screen sharing and other staples of the virtual world.

The lineup includes three dramas and three comedies, all set at various points since the turn of the millennium: Chatterbox by Quinn Xavier Hernandez takes place in 2000, for example; Sunrise, Sunset by Amina S. McIntyre is set in 2005; and so on up through Smith’s Long Time, No See, set in 2023. See their work and plays by Erin Considine, Elliott Dixon and Marium Khalid via Facebook Live and YouTube Live for a suggested $10 donation per viewer. Tickets HERE.

Smith, an arts journalist, and Burton, assistant general manager at Mable House Barnes Amphitheatre in Mableton, have been friends for more than a decade. They met as undergrads at the University of Georgia and roomed together during a study abroad trip to London. They’ve collaborated on creative endeavors before, like The 365 Project, a collection of poems that Burton self-published and for which Smith wrote the forward.

The grant stipulates that the show must wrap by December 31 and that the work  showcase local artists. Burton and Smith reached out to an array of metro writers, requesting scripts within a month. “We wanted different voices to be amplified,” says Burton. “It was also ‘Who do we want to work with? And who would be willing to do something kind of crazy and not look at us like we’re crazy?’”

Once they had their playwrights, they gave each one a choice of a prompt — simple premises like “a woman trying to date online who gets ghosted.” That’s what  Considine chose and what turned into Good Man Hunter, set in 2015. She did extensive research on the year, deciding to make her main character a major influencer on Vine, the short-lived platform that blazed brightly from 2013 to 2017.

Considine says it was interesting to revisit pop-culture references from the time –One Direction’s breakup, for instance, and Drake’s “dad dance” from his “Hotline Bling” music video. When you see the play, Considine says, “You’ll feel like, ‘Oh, that was just yesterday but also 100 years ago.”

Embracing technology rather than having to “pretend around” it has been refreshing, Considine says. She attributes it to Burton and Smith’s innovation and creativity. In detailed stage directions, she has characters mute themselves, put their phones down, pull up YouTube, navigate away from Skype and so on. “The nice thing about these pieces being done in this format,” she says, “is that it makes sense.” Actors like Tyshawn Gooden have a new awareness of lighting and how to bring the subtlety typical of film versus stage work. “This honestly has opened my eyes,” he says. “It’s a new frontier.”

Gooden plays a teenage boy in Chatterbox and a football player in Dixon’s Free Game. He and his fellow actors have become their own production and costume designers. Gooden has chosen different spots to sit in the same room with varied backdrops for each live performance. The separate visual cues let him drop into each character’s headspace more seamlessly, he says.

And, yes, some troubleshooting had to be done — like figuring out if platforms work better on Firefox or Chrome, tablet or laptop. Some platforms will cut off someone’s mic if the person speaks too softly because “it assumes that you’re not talking anymore,” Burton says. Her instructions: Play the quieter scene tenderly but don’t accidentally get muted.

J.L. Reed, who directs Free Game, Sunrise, Sunset and Long Time, No See, says he’s been in rehearsals where they spend the first 10 minutes trying to see if they can all hear each other. “We’ve laughed it off,” he says. “I hope they’re getting the sense that it’s truly not the end of the world if there’s a tech issue.”

Gooden sees the process as breathing new life into a difficult year for the arts –proving that the show mustn’t merely go on but shape shift. “I love how [theater] doesn’t stop. Just because we’re in the middle of this [pandemic] right now doesn’t mean we have to drop what we love to do.”