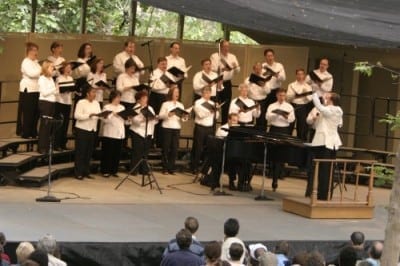 Jeff Baxter, a tenor and the Atlanta Symphony Chorus’ administrator, sent this note to the choristers. We reprint it with his permission. — Pierre

Robert Lower was a dear friend to many Atlanta musicians over the years. He was only 64 years old and was a member of the Atlanta Symphony Orchestra Choruses since 1979. As chorus director Norman Mackenzie mentioned in rehearsal last evening, aside from the many musical contributions over the years made by both Bob and Cheryl (Bob’s wife and a charter member of the ASO Chorus), they were also recently the executors of the late Charles Hamilton’s estate. Bob lent his legal expertise to seeing that the generous gift of Charles’ estate landed at the ASO and was earmarked specifically for the ASO Chorus. As many of you know, Bob was stricken with a sudden case of severe leukemia while on business on the West Coast. He received treatment immediately and was hospitalized there for three months with injured lungs and on a respirator. He had just returned to Atlanta this past weekend, and we all were hoping for the best with him back home, even though he was at risk for brain or heart trauma. Early Saturday morning he sustained significant damage to his brain. As Bob’s son David told me, his father didn’t suffer and, even while compromised on life support, managed to choreograph a beautiful end of his life.

A memorial service will be held at St. Luke’s Episcopal Church in Atlanta (435 Peachtree Street N.E.) this Thursday, September 1, at 4 p.m. A small chorus of voices has been assembled for the memorial, mostly from the ranks of the Atlanta Singers (many of whom are also ASO Chorus and Chamber Chorus members); Cheryl said she would welcome our presence in the congregation, especially in the singing of the hymns.

We remember and celebrate Bob in the words of the final movement of Brahms’ “A German Requiem” (which Bob sang with us many times): “Selig sind die Toten.… sie ruhen von ihrer Abrbeit; denn ihre Werke folgen ihnen nach.” (“Blessed are the dead.… They rest from their labors, and their works follow after them.”) The ASO Chamber Chorus performs at the Ojai Festival in California on June 6, 2006. Bob Lower is in the front row, second from right. Norman Mackenzie is conducting. Bob and Cheryl Lower sang with the ASO Chorus and Berlin Philharmonic in Berlin in 2008.

An attorney at Alston & Bird LLP, Bob led the firm’s Health Care Regulatory Compliance practice, where he specialized in complex health care transactions. He served as an adjunct professor of law at Emory University School of Law for several years and was a panelist and author on health care and copyright law. Bob co-founded Georgia Lawyers for the Arts, was the founding chairman of the Fulton County Arts Council and was a trustee of the Woodruff Arts Center. He was on the Board of Directors of the Harvard Glee Club Foundation and a trustee of Piedmont College.

An accomplished singer, Bob sang with Robert Shaw and the Atlanta Symphony Orchestra choruses and the prestigious Robert Shaw Chamber Singers. He was also a member of the Atlanta Singers, where he and his wife, Cheryl, shared the administrative responsibilities for the critically acclaimed 18-voice ensemble. Bob was especially proud of the choral works he commissioned from Alice Parker and Stephen Paulus.

Bob’s greatest adventure occurred last summer, when he undertook a 14-day solo trek in the Torngat Mountains of northern Labrador. He was awakened early one morning by two polar bears. This adventure in the mystical region known as “the land of the spirits” was a life-changing experience that he loved to share with others.

Love of family epitomized everything Bob believed in. He is survived by his wife of 25 years, Cheryl, and three sons from his first marriage, to Jean Ludwig Lower, who died in 1985: David (Amanda), Andrew (Claire) and James (Kate), and grandchildren Matthew and Anna Jean.

In lieu of flowers, the family is setting up a memorial fund in honor of Bob through the Atlanta Singers. The fund will be for the commissioning of new choral works in Bob’s memory. Checks may be written to: The Atlanta Singers (specifying “Robert Lower Memorial Fund” in the “for” area at bottom left) and sent to 935 Plymouth Road, Atlanta, GA 30306.