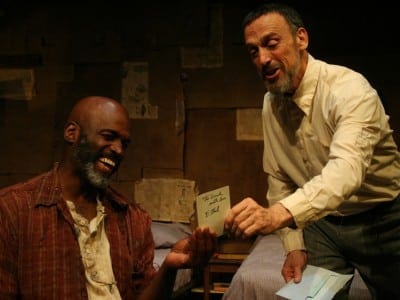 There’s an old adage in horse racing: Breed the best to the best and hope for the best. In a sense, that’s what’s happening at Theatrical Outfit and True Colors’ co-production of Athol Fugard’s “Blood Knot,” running through August 2.

The best — Tom Key, Kenny Leon and Susan Booth — have come together and the result is akin to a perfect storm for the Atlanta theatre community.

Leon and Key (one the Artistic Director of True Colors; the other of the Theatrical Outfit where the play is being staged) have been here before. They played Fugard’s mismatched brothers (in ways that go far beyond skin deep) in 1998. Now the Alliance Theatre’s Susan Booth has been added to the mix, as director, and her gift for minimalist theatricality brings new textures to the production. (Photos by Christopher P. Kettrey.)

Written almost 50 years ago, “Blood Knot” remains a two-man tour-de-force. Set in a South Africa still under the racist sway of apartheid, the play pairs the light-skinned Morris (Key), whom, it is hinted, has “passed” for white, and his dark-skinned half-brother, Zachariah (Leon). For almost a year they’ve shared Zach’s one-room shack, Morris busying himself more or less as a “wife” (he’s the one who cooks, cleans and provides a soothing balm for Zach’s aching feet).

Think Felix and Oscar in “The Odd Couple” (the actors apparently do; at times, their playing is sitcom broad … a set-up, we learn, for the searing finale).

Further, with their talk of moving to a farm or their slapstick comedy with hats and chairs, Zach and Morris also recall another pair of Famous Theatrical Pairs: George and Lennie in “Of Mice and Men” and Didi and Gogo in “Waiting for Godot.”

Only, it’s not Godot Morrie and Zach wait for.

A self-described “well-developed” 19-year-old, who likes “swimming and a happy future,” she’s looking for a pen pal. Initially encouraged by his brother, Zach writes back (well, he’s illiterate, so Morris does the writing). The problem? Ethel sends a snapshot and she’s white. And she’d like to come for a visit. Maybe bring her cop brother.

Structurally, the play suffers from an overlong first act. I can see Fugard’s intention — to immerse us in the dailiness of these lives, to make us comfortable with their innate otherness, to fill us in, so to speak, on a past that is not so much shared as gnawed over. Still, some judicious trimming would help.

That said, the second-act pay-off is electrifying — whether it’s an ominous charade with Morris decked out in “white” clothes and attitude or Zach’s heart-wrenching plea to their absent mother, “I have beauty, too, haven’t I?”

There is a terrible beauty at the heart of “Blood Knot,” one that cannot be diffused by its slight datedness (imagine a pen-pal dilemma in the age of Facebook). Fugard, who is white and originated the role of Morris, can only know Zach’s pain from the outside, but he fully understands the cage of “otherness.” He could be speaking for every white in the racially mixed audience at the performance I attended when he has Morris say, early, on, “I’m on your side or I wouldn’t be here.”

But as the play progresses, we learn that being “on your side” isn’t nearly enough. That the “sound of whiteness” can be the obscene n-word and the sound of “black happiness” can be bitter and hollow.

As thickly entwined and, at its core, mysterious, as a Gordian Knot, “Blood Knot” resonates with sadnes
s and truth. And this expert production honors every nuance and numbing reality.