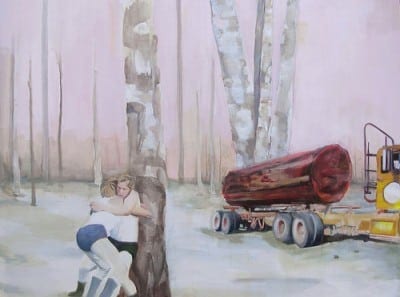 Marcia Wood Gallery closes out the season with an invitational invitational. Wood asked each of the members of her stable of artists to select an artist who interested them to participate in “Summer Guest House,” reviewed in today’s print edition of the AJC.

Most of the “guests” will be familiar to those who follow the Atlanta art scene, but the conceit injects some unpredictability into the traditional summer group show.

Among the promising young artists in the show are Cosmo Whyte, whose pencil drawings Lisa Alembik introduced in a show at Agnes Scott College, and Lorie Corbus. If Fairfield Porter had gone surreal, his painting might have looked like Corbus’ strange “Trucker’s Embrace.”

As I wrote today, “If the epic battle and its perverse eroticism bring to mind self-taught artist Henry Darger’s ‘The Story of the Vivian Girls…,’ the New York-based artist’s crisp realism and beautiful technique give the piece its wink-and-nod tone.”

The most novel inclusion is Lance Ledbetter, whose Grammy Award-winning record label, Dust-To-Digital, specializes in historic American vernacular music. Although Ledbetter is not a visual artist per se, his recordings are unusually artful in their presentation and often paired with art books. You can thumb through the books, watch the performers on the video monitor and listen to the music all at the same time.