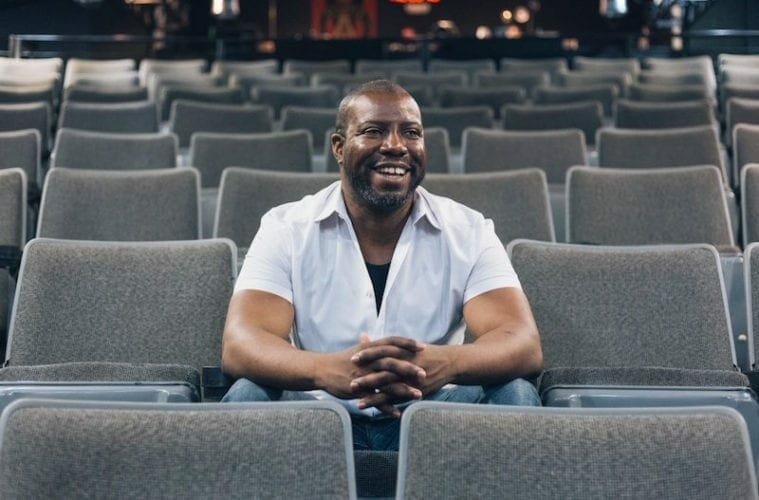 Jon Carr says being the artistic director at Dad's Garage Theatre Company is his "dream job."

“I am the artistic director of Dad’s Garage,” writes Jon Carr. “I am also a black man.”

Jon Carr, artistic director of Dad’s Garage Theatre Company, reached out in writing on Tuesday (June 9) to share his thoughts on the Black Lives Matter movement. His eloquent letter, very lightly edited for style, appears with permission in full below.

Carr, 40, became the sixth artistic director in Dad’s Garage history on February 1. He’d been the nonprofit company’s interim artistic director since November 2019, spent four years on staff as marketing director and has been part of the company’s performing ensemble since 2014. He also worked briefly at the Alliance Theatre before rejoining Dad’s.

The company estimates that at least 40,000 people saw this message in a few hours’ time, via a blog post, an emailed newsletter, press contacts and on Facebook.

“What people really responded to,” says Dad’s spokesman Matthew Terrell, “is that it wasn’t just a strongly worded statement, but an action-oriented stance that we and our community could take on.”

Dad’s Garage has a budget of about $2 million, a full-time staff of nine and does a mix of improv and scripted shows, operating 52 weeks a year and bringing in more than 30,000 people annually. When Atlanta artists were stilled by Covid-19, Dad’s pivoted more quickly than most, launching a mix of  livestreamed content on its own Twitch.tv channel. That continues today under the title Dad’s Garage Social Distancing Spectacular!

“I make jokes,” Carr said on his Facebook profile when he was named Dad’s top artistic leader. “I love my job, friends and life. What more can you ask for?”

My name is Jon Carr and I am the artistic director of Dad’s Garage. I am also a black man. I have stood with my hands on the trunk of my car while being searched because I was driving while black. I have a mother who lay face-down on a gravel road while an officer held a rifle to her head. I have a brother who narrowly escaped an incident with the police because he knocked on the wrong door. Then I heard about the murder of George Floyd. I am angry, I am sad, I am frustrated. But I am not surprised.

Systemic racism has been woven into the fabric of America since day one. The United States of America remains a country steeped in white supremacy, with hundreds of years of history, laws and policies that have endangered, abused and disenfranchised black and brown people while profiting from their suffering. The deaths of George Floyd, Breonna Taylor, Ahmaud Arbery and Manuel Ellis are simply the latest names on a long list of deaths due to police actions. For every death, there are countless more black and brown people harassed and abused by police officers daily. Many of our black and brown performers, volunteers and staff are on that list. So let’s be clear: We are in support of the protesters. We support equality. We support peace and safety for black and brown people. We demand change from our government, those in power, and ourselves. We oppose abuse, harassment and silence.

We stand firm in our commitment to help dismantle systemic racism, but we know that this work does not end with a week of protests or a strongly worded statement. We must look inside ourselves — individually and as a community — and lead through action, consistently examining our choices and holding ourselves accountable.

WHAT WE ARE DOING:

INVESTING IN THE DEVELOPMENT of our black and brown performers. This includes ensuring they have access to professional development opportunities and financial support to create new work to showcase their perspectives. We will also partner them with industry professionals to help further their careers.

TRAINING OUR STAFF, board, and everyone else within our organization about the importance of anti-racism efforts in our community. This will include reading materials, training/workshops and digital toolkits aimed at educating everyone within the company about how they can work to end systemic racism.

DIVERSITY AND INCLUSIVITY SCHOLARSHIPS. We have a number of scholarship programs focused on increasing diversity in our improv community. The diversity and inclusivity scholarship is just one of them. This scholarship pays for 100 percent of the costs of our improv classes and supports people’s growth as performers. We have funded dozens of scholarship recipients, many of whom have gone on to join our roster of improv performers, been cast in scripted and improv shows, and become part of the “Dad’s Garage Family.” Because we recruit our performers from our classes system, this will continue to ensure growth in our cast diversity. Information on applying for this scholarship can be found here. The deadline is ongoing.

It’s easy to say “those police officers were racist” when looking at the murders of George Floyd, Breonna Taylor, Ahmaud Arbery and Manuel Ellis. It’s much harder to identify micro-aggressions, systemic white supremacy, and the biases existent in ourselves and community. We’re committed to that work.

HERE IS WHAT YOU CAN DO:

EDUCATE YOURSELF. Take the time to read and learn about systemic racism — resources are more visible than ever. Taking the initiative will help internalize the information vs. simply learning a few new phrases. Read the book White Fragility: Why It’s So Hard for White People to Talk About Racism by Robin DiAngelo.

CHECK OUT the  Showing Up for Racial Justice website.

PARTNERSHIP FOR SOUTHERN EQUITY, which seeks social justice through policies and actions that equitably distribute wealth, resources and power to ensure opportunity for all.

THE EQUAL JUSTICE INITIATIVE, which is committed to ending mass incarceration and to challenging racial and economic injustice.

BLACK LIVES MATTER, whose mission is to eradicate white supremacy and build local power to intervene in violence inflicted on black communities by the states.

ATLANTA SOLIDARITY FUND, which provides support for people who are arrested at protests or otherwise prosecuted for their movement involvement.

VOTE! It may seem obvious, but it remains one of our most powerful tools.

CONTINUE to educate yourself.

TALK TO YOUR FAMILY AND LOVED ONES. It’s not enough that your elderly relatives are “of another time” — now is the time to speak up.

EXAMINE YOURSELF. Before we do anything we have had to take a hard look at ourselves and make sure that we are doing everything we can.

I love Dad’s Garage. We are a community that takes care of our people, and that means standing up for every black and brown person that is suffering.