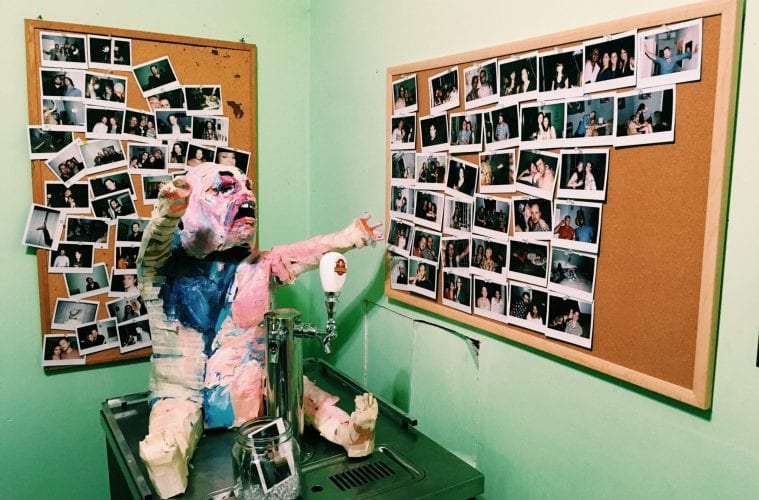 Home is where the art is: Atlanta’s homes-as-art-galleries

It’s a murky Saturday in summer and well over 100 people are milling in and out of Cabbagetown’s “Green House,” a worn two-story home where Ethan Payne, Asher Payne and Jake Adams reside. Guests lean against the porch railing, shoulder-to-shoulder. In the living room a dance party has started. Expectedly, down the hallway, a line has formed in front of the kegorator. What’s unexpected is that straddling the tap is a grotesque sculpture of a baby, constructed of cardboard and tape. The work is “Baby Hug,” by Tori Tinsley, and this house-party-turned-gallery-opening is the piece’s debut. “This is the one piece I definitely would not have shown at a gallery,” says Tinsley. “She’s just awful and sad and you have to laugh at her all at the same time.” Other never-before-seen works include “Torn Hug,” “Hug Grouping” and “Eye Smash,” the last of which depicts a giant eyeball smashing a creature below it. “It’s about examining something so intensely that you damage the thing you are obsessed with. Although it made it into New American Paintings magazine, I feel like it would be too violent for the Atlanta gallery scene,” says Tinsley. 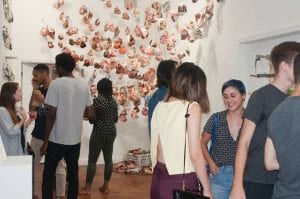 This is the 9th party in a series at the Green House. Payne (Disclosure: Payne is a videographer for ArtsATL) and his roommates started hosting these DIY gallery openings back in November 2015, debuting with a range of large format black and white photographs by Jimmy Rowalt. “In a way these parties were completely selfish on our part,” says Payne. “We really just wanted to meet new people in the area and have parties and support artists we liked.”

The night before, Tinsley also had work featured in The Sofa Show, hosted in Marissa Graziano’s apartment in the Highlands. The group show featured work from 19 emerging artists, including Davion Alston, Callie Cargo, Abigail Justman, Katie Troisi and Jordan Stubbs.

What is this phenomenon of homes-as-gallery? Is it that artistic representation is hard to find? A reaction to the ever-growing cost of living, exhibiting, studio space and supplies? Are artists simply looking for community and to cut out the middle man?

Whatever it is, in Atlanta, it ain’t new.

Before Good Enough opened its doors to the public this past June, before E.A. Hyde’s House Gallery came into being, some of Atlanta’s most beloved and heralded spaces for emerging artists got their start in the living rooms of their founding curators and directors. Take for instance Eyedrum, whose humble origins trace back to Woody Cornwell’s Silver Ceiling space, which existed in his apartment in the mid-90’s. “The beginnings of Eyedrum pervade through every move we make,” says Eyedrum Executive Director Morgan Carlisle. “It feels like home to many artists and its members and we try to keep it that way. It is extremely important to preserve its mission and roots relative to the times we are in now.” 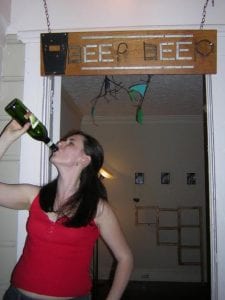 An image from an opening at Beep Beep’s first gallery space in Oakhurst.

By 1997, Young Blood Gallery opened in the West End living room of its co-founders, Maggie White and Kelly Teasley. Nearly a decade later, in 2006, Mark Basehore, Steven Rauber and James McConnell opened Beep Beep Gallery in their Oakhurst home. And the year after that, in 2007, Christopher Hutchinson and Kathleen Flowers started to have shows in the Mattress Factory –– Archetype Gallery. Even more recently, three Georgia State University students, Jordan Stubbs, Theodore McLee and Pastiche Lumumba, opened the Low Museum of Contemporary Culture in the Old Fourth Ward in the floor level of their living space. Youngblood Gallery, Beep Beep, Low Museum and Archetype all went on to evolve into more formalized gallery spaces before closing their doors. After three years, Low Museum closed in May.

This rich and perfunctory history attests to the fact that these DIY spaces are swift and effective ways of getting involved in Atlanta’s arts community. Though, with Eyedrum the only listed space still open (now in its 5th home in South Downtown), they can prove fleeting.

While the cast of attendees, artists and homes have certainly changed over the years, the motivation for opening these spaces seems almost inherent. “Steve and I had just graduated from college and were living that post-college lifestyle of found furniture and unintentional minimalism,” McConnell recounts of Beep Beep’s humble beginnings. “We didn’t have any art or anything so we hit up the artists we knew who were all our friends and had an art show.  Mark and I had been making a zine called Metatronic and through doing that we knew about Youngblood and how it’d started as a house thing, so we figured we’d just follow in their footsteps.”

In the 2014 print issue of BURNAWAY, The Low Museum’s Lumumba remarked that the museum’s aim was to, “bridge the gap between the house show crowd and the museum crowd.”

This is not a phenomenon isolated to Atlanta, by any stretch of the imagination. “Milwaukee has a wonderful overabundance of little spaces opening and closing, an always changing cast of characters taking the reins,” says Atlanta Contemporary curator Daniel Fuller, citing artist John Riepenhoff’s enthusiasm for such projects as what led directly to Fuller’s own collaboration with Alessandra Hoshor’s Nasty Cowboy in the spring of last year. Spaces like Good Weather Gallery in Little Rock, Arkansas run by Haynes Riley, and Eddy’s Room, run by the one-time Atlantan Austin Eddy in New York are a testament to that. In fact, The New York Times recently gave Eddy a shout-out in their examination of the city’s home-as-art-gallery scene.

Even more seasoned artists and curators see the benefit in the occasional nonhierarchical approach of these spaces. “Apartment and house galleries serve all of us,” says Fuller. “You have to have all of the bits together for maximum efficiency to have a healthy art ecosystem.” But Fuller encourages artists and hosts to look outside of their immediate networks to really benefit the community at-large, to truly use the DIY ethos of the space to experiment and push boundaries. “Atlanta needs its artists to reach beyond our community, out into their networks and bring in new voices. At their best, these spaces are in rentals. Rentals can get messy; the artists can push themselves. If the show works, cool. If the show doesn’t, then it was in a spare room,” he says. “What I’ve seen spaces like this in Atlanta are really conventional,” he adds. “It’d be great to see them get weird.”

For emerging artists with low price-points and little gallery experience, these home-as-art-gallery spaces gives them a chance to flex their creative muscles and build confidence and experience in addition to making a little extra money off of the sales of their work. “We take 10% of art sales,” says the Green House’s Payne. “Really, just to be able to cover things like cups and cleanup materials. We’ve destroyed a lot of mops over the past nine parties.” Gallery standard is to take 50 percent in commissions, but with those higher percentages comes a slew of more formalized assistance to the artist: licensing, representation, promotion, regular gallery hours open to the public and curatorial assistance. Being represented by a gallery also helps legitimize an artist in a way that often draws the attention of established collectors.

Each artistic outlet certainly comes with its own set of pro’s and con’s, but in a developing arts economy such as ours, there’s plenty of room for all.