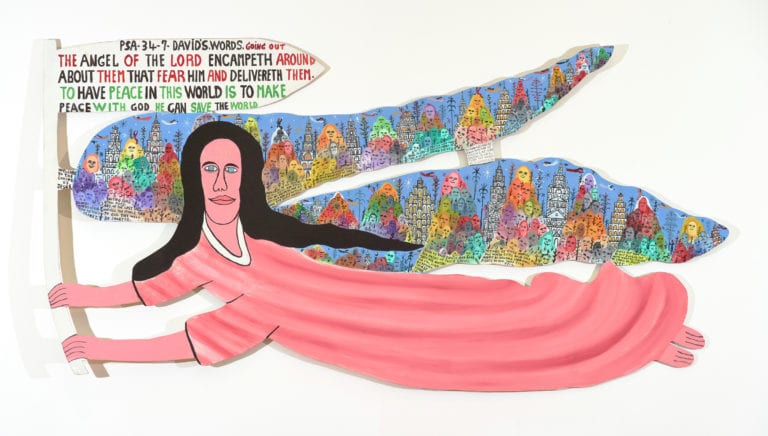 With High at the wheel, Backroads becomes ride into history, whimsy

The adventure in the High Museum’s Way Out There: The Art of Southern Backroads begins with the late American poet Jonathan Williams, his final unpublished manuscript and photographers Guy Mendes and Roger Manley. In the 1980s and ‘90s, the three became Southern roadies on the hunt for self-taught artists.

Many of their findings are in this exhibition, which treats us to more than 50 sculptures, paintings and other works from the High’s collection and some 100 photographs — many unseen until now. They’re all on view through May 19 on two floors of the High’s Anne Cox Chambers Wing.

So, what happens when you stop someplace unexpected? Often, you leave more inspired. Way Out There, the first show curated by the High’s folk/self-taught art and photography departments, sticks with you hard, kind of like red clay. More than 12 artists near and dear are glorified, including Thornton Dial, Howard Finster, Eddie Owens Martin (aka St. EOM) and Sister Gertrude Morgan.

Way Out There epitomizes unabashed quirkiness. The first stop upon entry is Mendes’ take on Finster’s larger-than-life Paradise Garden, Summerville, GA (1982), which inspired this exhibition. Hone in on the raised mailbox flag that says “stop look listen” or the busted typewriter amid rusted car parts and behind an eclectic statue with eyebrows as old-fashioned as magnetic doodle drawings. Tinsel hangs, too.

By now you’ll be riding high. A map spanning most of a gallery wall shows the stops the trio made. The High calls viewers to action, complete with a rest stop-esque literature rack. Grab some brochures so you’ll know where to go, be it Popes Museum in Ochlocknee, Georgia, or Ave Maria Grotto in Cullman, Alabama. Browse the companion book Walks to the Paradise Garden: A Lowdown Southern Odyssey and watch a short video reminiscent of a town’s welcome center that mentions, “Their crime is that they simply want to be themselves and money isn’t what they’re about.”

Journey through the Piedmont, Appalachia and the Mississippi Delta, and you’ll see a mix of materials as exciting and diverse as a carnival ride. Some make you smile. Some make you wonder. Others make you want to skedaddle.

Many of these artists are shown in their natural spaces, giving the exhibition a down-home family feel. In Mendes’ gelatin silver print James “Son Ford” Thomas, Leland, MS (1986), Son Ford sits on a bed in an I-do-this-every-day pose, hat cocked to one side, next to duct tape on a box turned upside down and used as a table. He holds a skull and seems backed by a wood-paneled wall of proclamations.

Humanity is on view here as well as art. Consider Sister Gertrude Morgan’s Homemade Megaphone (undated), on which she wrote in ink, “he hold the world in his hand.” Consider, too, the markers, paint, ballpoint ink and glitter on paper in Royal Robertson’s heroic and cartoony yet serious Vision Dream (1993) or Mendes’ Royal Robertson’s House, Baldwin, LA (1986), with a sign that reads “Genius. Prudent prophet. Welcome widows. Noble Ma-Squaw.”

There’s more, but here we stop to ask: Who wouldn’t want to stop in places named Vinegar Bend, Needmore or Tyewhoppety?