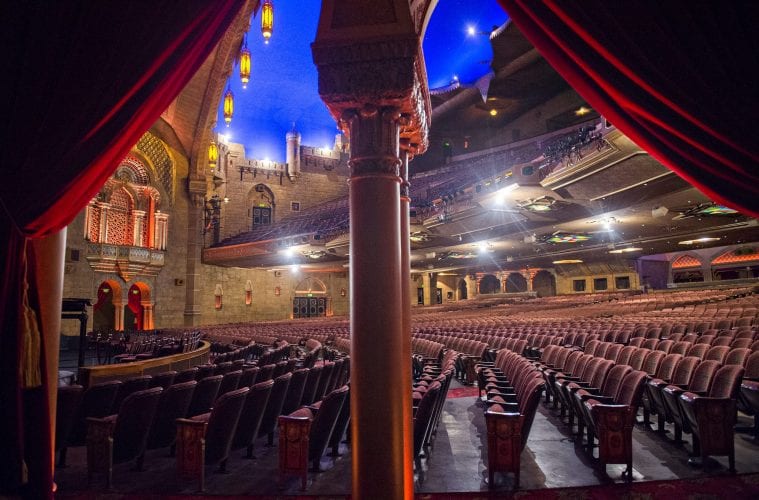 Two Moorish castles are built into the ceiling of Atlanta’s iconic Fox Theatre. Connecting them is an ancient-looking stone bridge, which serves to form the proscenium arch for the theater. A series of rugs draped over the bridge resemble flying carpets left to air out after a journey. A keen eye might spot a rug that appears to have a square patch sewn onto it –that patch is actually one of the speakers for the Fox Theatre and it was painted to look like the rug that surrounds it. The other rugs draped over the bridge allow modern technology to fade away into the grand splendour. All sorts of decorative and historic details like this hide in plain sight at the Fox Theatre. Unlike most places in the world, at the Fox Theatre technology yields to pageantry.

Built in the late 1920s, the Fox Theatre was a show palace the Atlanta Journal described as having “picturesque and almost disturbing grandeur beyond imagination.” Originally meant to be a Yaarab Shrine Temple, the Shriners soon realized the multimillion dollar construction project was out of budget. Movie mogul William Fox stepped in to help build the theater along with several other grand movie venues across the country. Eve Leo Fox, his wife, was the chief decorator and stylist for the theater. By the time the palace opened on December 25th, 1929 Egyptian, Middle and near Eastern art was very en vogue, largely due to the discovery of King Tut’s tomb a mere seven years prior. Eve Fox’s desire to fashion the palace with the most trendy styles of the time are what make the theater timeless today — an opulent mishmash of Egyptian motifs and Moorish culture.

All of the furniture was personally selected by Mrs. Fox, and it has been carefully maintained for decades since. The theater houses an expansive collection of Rothschild furniture — an American company still making lavish furnishings dripping with ornate details. This is not a museum experience because everything here can be seen and touched; even the vintage mohair sofa has almost 100 years of enjoyment behind it.

As an early form of 1920s fireproofing, many of the decorative elements in the Fox are made of plaster or metal that has been sculpted, molded, glazed, varnished and stenciled to resemble everything from gold florets to flying carpets. That beautiful striped canvas canopy over the balcony seats? That’s painted plaster. The opulent gold accents are simply metal painted gold. (There’s real gold in one place in the theater, but that’s a secret.) Replacing the finishes is a nonstop chore. All these fancy details meant to evoke the look of a bejeweled near-East castle can break quite easily. When a pipe explodes or a show has a heavy load in or when a patron steals something they hope is gold leafed — the staff notices all the cracks and crumbles, and promptly has it fixed.

At the helm of it all is the Tillander-Sullivan family. Edna Tillander serves as the Preservation and Restoration Foreman of the Fox Theatre, and has been there for 19 years. Her three brothers all worked restoring and renewing the Fox; they convinced their sister to move back home to Atlanta from frigid Wisconsin to join the family business. Today Edna Tillander presides over a huge workshop with filing cabinets full of patterns to recreate all the plaster and metal baubles that break in service to the theater. When the exterior display boxes need to be redone in shatterproof glass, Edna makes it happen. Edna’s got a box full of glass teardrops of all shapes ready to dispatch into chandeliers. They are the most replaced item, often stolen. Edna knows every detail in the theater, and when something needs replacing, she’s on it.

The Fox still has vestiges of its segregated past visible throughout the space. In the balcony, an imposing wall used to separate off the black section of the theater from the white area. In fact, white and black patrons never interacted when they would see a show. There were separate entrances (there’s still an exterior stairwell that was used for black patrons), separate box office, separate concessions and separate bathrooms. The bathrooms for white people were marked “Ladies” and “Gentlemen” while the facilities for black people were marked “Men” and “Women.” You can still see these signs today. The Fox Theatre was the first theater in Georgia to voluntarily desegregate — in 1958. Perhaps the oddest space in the Fox is the Egyptian Ballroom. Stretching across the floor is an intricately designed carpet made in Dalton, Georgia. Blue chevrons stack across its length, evoking the look of a river. Its middle section has both the blue chevrons and twirling stars woven throughout. Up on the ceiling are Egyptian stars which are reflected back down in the carpet. A set of columns sporting hieroglyphics stands to the right of this stage, emblematic of the decor of the theater prior to renovations. Now, the Egyptian Ballroom hosts dances, weddings, and formal events. The deadly serious Egyptian relief sculpture above the stage is by far the strangest element in the entire room. An intaglio panel depicts Ramses II holding a sword above a Nubian slave, moments before killing him. It adds quite the levity to a wedding ceremony.

The experience of an evening at the Fox is intrinsically the same as it was in 1929 because much of its wonder is found in the details. Standard tours are available on Mondays, Thursdays and Saturdays between 10 a.m and 1 p.m. It’s hard to believe that the iconic theater has been threatened on more than one occasion. The space is the last remaining show palace of Atlanta, one that local citizens have fought for decades to preserve.

In-depth behind the scenes tours of the iconic theater will be held at various times on Saturday, June 11, and Monday, June 13.