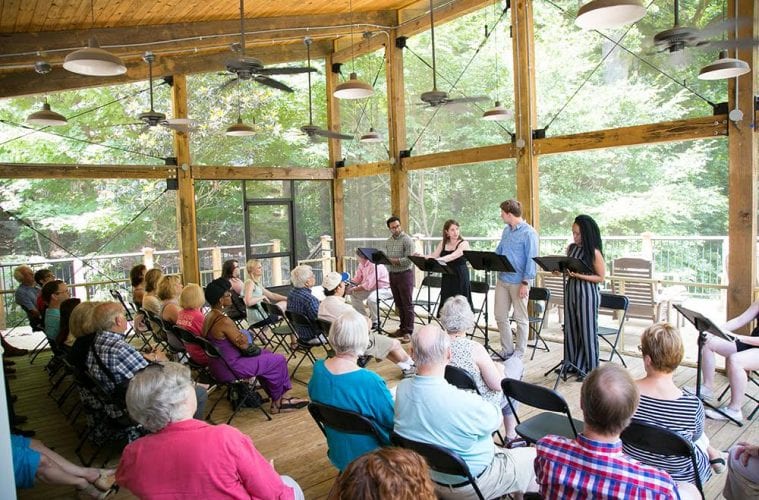 When most people come to hear a play, they expect to sit inside of an air-conditioned theater with a heavy velvet curtain hanging between them and the performers. Found Stages, however, has made it mission critical to remove the walls from theater. Since 2014, this small innovative company has created outdoor, site-specific new work. The first Sunday of every month, through November, they are hosting a Wine & Reading Series at Dunwoody Nature Center, featuring free wine, food and new plays by Georgia playwrights.

“Our goal is to develop relationships with writers,” said Nichole Palmietto, artistic director of Found Stages. “We don’t pick the plays, we pick the playwrights. We let them write about whatever they want and only ask that they keep the plays to no more than an hour long. We think that our shows can be community building events, so we include food and drink so that people can get to know their neighbors.”

Playwriting is the family business for DePoy, who is married to Lee Nowell (Beyond Reasonable Doubt, Synchronicity Theatre). His new play Kamikaze Drug Lords of the Sunbelt, which he describes as a mystery novel set onstage, is inspired by his Foggy Moskowitz series about a hit man going through an existential crisis. There are a lot of jokes about the nature of life and death in the play, and he wants to see how an audience responds.

“When I first finish a play, I usually do a table reading at my house, and this opportunity in public is essential to making the play work,” DePoy said. “For a playwright, being able to hear the work out loud with people who don’t know you, and you don’t know them — that’s the first step to deciding what works and what doesn’t.”

Holder is also excited to see how audiences respond to his new, immersive work, He Sees the Field/He Wants to Run. The play is about a man who communes with his ancestors throughout his soul’s journey, and the audience will be the guardian angels he encounters in the afterlife. Holder is currently in Los Angeles writing on the upcoming NBC medical series New Amsterdam but considers Atlanta his theatrical home.

“The stage is a way to have conversations with people and play with their imaginations,” Holder said. “When you’re in line for a glass of wine and you’ve been sitting with them and heard them gasp or laugh, there’s a certain kind of magic there. What I love about Found Stages is that we’re all there for the experiment and to make bold choices.”

Found Stages hopes to develop new plays with each playwright and to do a reading series with different writers every summer. They already have plans to develop Gossett’s work into a text message play that will go up in December.

“We really just wanted to work with writers that call Atlanta home but have national reputations and highlight the fact that Atlanta is world class,” Palmietto said. “We have amazing playwrights that can go anywhere, but they choose to live here. They have contributed a lot to the arts and culture in our city, and this is a way to showcase that.”