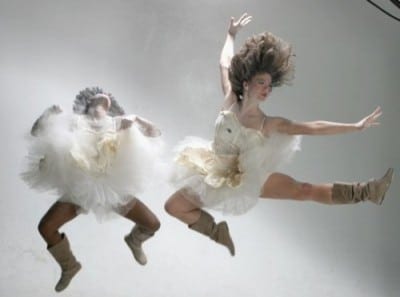 When FLUX 2011 descends on Castleberry Hill this Friday evening, some 224 visual, sonic, theatrical and multimedia artists will saturate the Atlanta historic district with close to three dozen thought-provoking artworks. They’ll be asking questions such as: what traits do humans share with animals? What sound vibrations linger in the earth from the time Native Americans lived in the area? What creative energies lie in the neighborhood’s unfinished building interiors and vacant lots? And looking at our environment’s future: if rising sea waters engulf cities, how do we carry on?

Answers may or may not appear during the four-hour event. But this free and audaciously public celebration of Atlanta’s creative culture is likely to flood the senses, jog the imagination and challenge conventional, status quo thinking. Exterior walls will become large projection screens; an unfinished building interior will set the stage for a multimedia dance work; streets, alleys and an open construction pit will become performance venues. There’ll be roving, interactive street theater, absurdist street preachers, light and sound installations, aerial dancing, beat boxing, puppetry and molten iron bees whizzing through the air. FLUX 2011 will start at 8 p.m. and run until midnight, culminating with ancient Chinese iron throw fireworks. Click here for details on getting there and on car and bicycle parking, food and more.

Some of the featured artists are internationally recognized, such as Savannah College of Art and Design graduate Monica Cook, whose animation was featured in the Guggenheim Museum’s competitive “YouTube Play” video initiative; Craig Dennen, recently noted by ArtForum; and Lauri Stallings, the most talked-about member of Atlanta’s arts community, who’ll present work alongside artists from as far away as New York and California. But most of the participating artists are based in Atlanta, from seasoned and young professionals to students and faculty from area colleges and universities.

Dance will be featured prominently. Stallings’ gloATL will perform “Livers,” a new, site-specific roaming work. And the D’AIR Project aerial dance company, as well as Zoetic Dance Ensemble and friends, will power ongoing, movement-based art installations through most of the evening.

Zoetic’s new site-specific installation, “Occupied,” will take place in an unfinished building interior at Castleberry Point, at the corner of Nelson and Walker streets. (FLUX maps will be available at the event.) Created in collaboration with film and dance maker Onur Topal Sumer along with Crossover Movement Arts and percussionist Emrah Kotan, “Occupied” aims to bring forth the natural world that exists inside this vacant space and to create a world that shows the energy, light, texture and movement that inhabits it.

Spectators outside will be able to peer through the windows, on a level with the dancers on Walker Street, or look down at the performance from Nelson Street’s higher ground. Organic materials — grass, rocks and gravel — will cover the dusty floor; dancers will appear as creatures covered in white flour that will create a haze as they move. Sumer’s film projections will wash over fabric-covered pools of water, and dancers will mix water with flour and press their handprints on the interior surfaces. They’ll perform a series of 30-to-40-minute shows.

At Castleberry’s opposite end, in the courtyard behind Marcia Wood Gallery at 263 Walker Street, the D’AIR Project, an aerial dance company new to FLUX, will perform “Humanology.” Nicole Mermans, D’AIR Project’s artistic director, explained that the hour-long aerial dance work “puts the human species on exhibit as we study the quirky, unusual traits we often hide behind.” A cast of nine dancers will take that idea to the next level — on the floor, in the air and upside down. Self-discovery is a theme. As characters develop and relationships evolve, the dancers will hang, drop, climb, swing and spin from an aluminum rig more than 18 feet high that’s equipped with trapezes, wheels, cubes, ropes, slings, hoops and bars, all to an eclectic mix of pop and alternative music.

This is a new piece for D’AIR and the first time it will perform a full work outside its home in a historic Grant Park church. Made up of a classically trained dancer, a rhythmic gymnast, acrobats, a hip-hop dancer and a showgirl, the troupe presents daring, theatrical and accessible work with professional polish, humor and honesty. There will be three performances, each an hour long, beginning at 8:15, 9:30 and 10:45 p.m.

At Le Flash-Atlanta in 2009, the predecessor of FLUX, gloATL’s roaming, migratory performance “pour” helped spark the city’s interest in temporary, site-specific public art. Since then, Stallings’ dance language has become more thoroughly fleshed out, her sense of structure more clearly crystallized, as we saw in “Maa.” At this year’s FLUX, Stallings’ “Livers” is likely to be one of her most interesting roaming works to date.

Stallings sketched out “Livers” last spring while researching the Paris-based Situationist movement of the 1960s, which she describes as a group who were “ferocious in their minds, habits, philosophies, actions. They understood that life is here and now and accepted its outrageousness and lack of sensibility.” She borrowed the title from French theorist Guy DeBord’s statement that “We are all Livers.”

It will be gloATL’s first roaming performance since last November’s “Hinterland,” with Big Boi at Woodruff Park. The new migratory work, Stallings explained, explores human movement at its earliest stages of development, when our movement patterns and experience are much like the animals from which we evolved.

There will be two performances, beginning at 8:30 and 10:30 p.m., both starting at the Peters Street Bridge. The dancers will begin moving almost like animals. They’ll roll over each other’s shoulders, clinging to one another as if feeling isolated or displaced. They’ll crawl on all fours and stretch out their wingspans. They’ll migrate (a trait humans and animals share) through nearly a mile of Castleberry streets and alleys, arriving at a place of safety and comfort, which Stallings calls “the Tank,” an empty lot on Walker Street near Haynes Street. It’s a deep, rectangular, sunken space filled with red wood chips and rubber shreds. Spectators can view the performance from bleachers above; a children’s slide will be provided for those who wish to join the dance.

Stallings hopes that viewers will witness gloATL’s ferocity and will take on that quality themselves, and into their everyday lives. “The bottom line is that we are human beings,” Stallings continued. “Yet on Friday night, [audiences] are going to get a glimmer of something else that’s in all of us: ferocity. Do it, express it, experience it, share it.”

As we’ve learned from past FLUX evenings, it’s best to arrive a little early, because some streets will be blocked off. The Krewe of the Grateful Gluttons’ bicycle lantern parade will kick off the proceedings at 8 p.m.