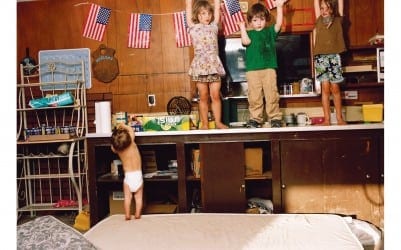 “Five Points” journal to be feted in evening of readings, music and art “Five Points: A Journal of Literature and Art,” a publication of the Department of English at Georgia State University, takes its title from the center of downtown Atlanta, where five streets and diverse crowds come together. It’s a handy metaphor for the journal’s editorial mission: “a convergence of ideas and genres, photograph and text, north and south, east and west, young and old.”

That all-encompassing spirit will move from page to stage on Thursday, April 19, in a celebration of the new spring issue, encompassing readings, music and photography, at Whitespace Gallery from 7 to 9 p.m.

“We’re setting up this nice intersection of disciplines to reach out to a broader audience that might not know about us,” says co-editor Megan Sexton.

The journal, published three times a year, has featured the work of Billy Collins, Sharon Olds, Joyce Carol Oates and other celebrated writers since it was founded in 1996 by novelist Pam Durban and David Bottoms, Georgia’s poet laureate. But despite an international following, “Five Points” remains relatively obscure in Atlanta. Possible Futures, an Atlanta-based nonprofit arts foundation, and Whitespace have teamed up to address the issue. The Whitespace event will inaugurate a series that will showcase the journal’s creative contributions. “Atlanta is lucky to be the home of ‘Five Points,’ one of the premier literary journals in the country, and one which consistently publishes outstanding work by both established and new writers,” says poet Anya Silver (at right.) “It’s the kind of journal that anyone interested in good writing can pick up and savor, even a reader who doesn’t normally think to read a literary magazine.”

Thursday’s celebration will feature readings by Silver, Gregory Fraser and Laurie Watel, all contributing writers, as well as an exhibition of photography by Chris Verene (below), whose dance band Bach on a Hook, which takes a playful approach to classical music, will also perform. Verene, whose work was chosen for the 2000 Whitney Biennial, now lives in Brooklyn but maintains ties to Atlanta, where he studied at Emory University, earned his MFA at GSU and founded the Rock*A*Teens in Cabbagetown. “Chris Verene is best known for his ongoing series of photographs featuring his family and friends in Galesburg, Illinois, which has been hard hit economically by factory closings,” says Sexton, noting that the spring issue of “Five Points” features the most recent installment of the series. Silver, who teaches at Mercer University, also studied at Emory. Her luminous debut collection, “The Ninety-Third Name of God,” which addresses her struggle with breast cancer, was called a “bittersweet” book that “verges on prayer” in The New York Times.

Fraser’s poetry in two collections, “Strange Pietà” and “Answering the Ruins,” has explored his relationship with his brother Jonathan, who was born with spina bifida, and cultural standards of normalcy. Fraser (at left) teaches at the University of West Georgia. Watel (at right), a Decatur resident who earned her Ph.D. from Emory in women’s studies, will read from “Giveaway,” part of a book of loosely connected Atlanta-based stories that involve babies.

“One of the major impacts a literary magazine can have,” Sexton says, “is the way in which it illuminates genre. When a story runs next to a poem and an essay runs next to a story, questions of form are raised — how one form may offer different challenges for the language and various experiences for the reader. This inaugural event will go even further with visual forms and music.”