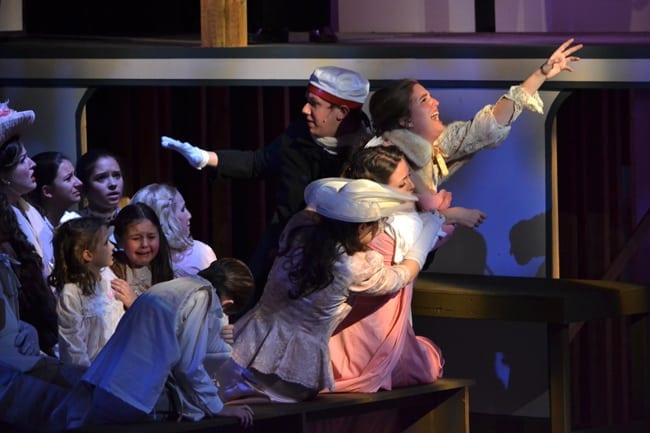 The scene where children realize they will not be saved before the Titanic sinks. (KVC Photography for Fabrefaction Theatre Company)

As Titanic-mania continues on the 100th anniversary of the ship’s ill-fated voyage, Fabrefaction Theatre Company is capitalizing on the craze by staging the Tony Award-winning musical “Titanic.” A huge cast made up of all ages is game, but this musical is not one for the ages.

Running at Fabrefaction through April 29, “Titanic” is an epic musical about the short history of the RMS Titanic and some of those aboard. Among the characters are ship staff members, including Captain Smith (Robert Wayne), Bruce Ismay (David Cater) and Thomas Andrews (Trey Getz), who designed the ocean liner. As well, there’s an assortment of first- and second-class passengers and some of the colorful lower-class ones too. The passengers include Caroline Neville (Caleigh Allen) and her husband-to-be Charles Clark (JD Touchton); Alice Bean (Paige Mattox) and her husband Edgar (Ray Hilton), who have mixed reactions to being in second-class quarters; and long-term couple Isidor and Ida Strauss (Joel Grey and Glenda Gray).

Early on at sea, Ismay makes it clear that he wants the ship to speed up and arrive in New York ahead of time, but safety is more a priority for Andrews. The first half sets the stage, and not until after an hour or so does the ship hit the iceberg. What happens from there is well documented. It’s only a matter of time before the ship has started to sink and women and children and the well-to-do are put onto lifeboats while hundreds more are left to die. In all, 700 or so are saved but another 1,500 die that night.

As directed by Jeff McKerley, who also choreographs, the opening number, “There She Is,” is a dandy. It involves and introduces almost all the cast as they come aboard and behold the ship, while Andrews, its designer, takes it all in. It sets a great tone for the show.

“Titanic” has more than 30 songs and a cast of nearly 50. When they all come together, it’s very pleasant and lively. Another highlight is a number called “Lady’s Maid,” in which three Irish ladies (Christina Hoff, Emily Diamond and Lyndsay Richardson) — all lower-class and all named Kate — envision life in America, in an inventively choreographed and witty moment.

But reality, unfortunately, sets in after a while. “Titanic” is a musical that many people don’t even know exists. Lost in all the hoopla over the James Cameron movie was the show, which somehow won the Tony Award for best musical in 1997. Many who’ve seen it wonder why. Despite an often celebrated score, with music and lyrics by Maury Yeston, the story has little dramatic tension. Peter Stone’s book is just not terribly deep or able to individualize any of the folks on the ship or share anything new. He points out the class differences and does little else.

Take away half a dozen musical numbers and little remains. Some of the characters are based on real people, but it’s difficult to keep track of who’s who, especially with what seems like dozens of passengers. With the exception of the Strausses, who decide to stay together as the ship sinks, there’s little emotional drive. It’s also hard to suggest the sinking of a ship onstage. One scene of panic does register: a selected few passengers get into lifeboats while children below look out of windows and realize they won’t be saved.

Fabrefaction is a newer theater company that, like Pinch ‘n’ Ouch, has made a real name for itself of late, most recently with a well-received version of Stephen Sondheim’s “Sweeney Todd.” This is obviously an expensive show and one that hasn’t been simply cranked out by either the director, cast or hard-working band. The ship is the major star here, and no character dominates. Almost everyone aboard has a song, though, it seems, and McKerley’s cast has no glaring weak links. If the set is a bit bare-bones, Tony Smithey’s costumes are dynamite.

A calamitous version of “Titanic” visited the Fox Theatre a few years after it won the Tony. At worst, this take is twice as effective as that one. McKerley and his ensemble give a lot more to this show than it deserves. It would be great to see the same group in something not as fundamentally flawed.