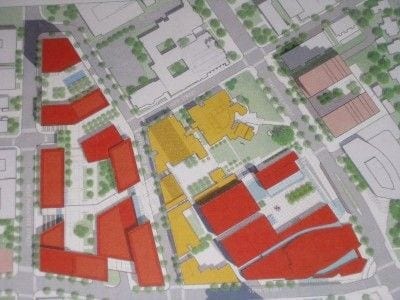 At first blush, the Woodruff Art Center’s master plan — revealed this afternoon at a press briefing — make good common and creative sense. Commissioned by the arts center in fall 2008 from Boston-based Sasaki Associates, it builds on the conceit that architect/planner Renzo Piano introduced in the 2005 expansion: a village for the arts.

Ultimately, most of the original Memorial Arts Building, costing $8 million when it opened in 1968 and showing its wear, will be dismantled or razed. Replacing it will be four free-standing buildings, some new, some existing but reconfigured: a deluxe new concert hall on the current drop-off plaza at the southeast corner of the property; an education building salvaged from the northeast end of the center; the old Alliance Theatre; and the current Symphony Hall, which will be refurbished after the ASO vacates. These four buildings will have a plaza in the middle, which opens along Peachtree Street. Walking paths between the buildings will connect Peachtree to the plaza outside and to the western end of the campus, facing MARTA’s Arts Center Station.

Phase I involves building a new ASO Symphony Center at the high-profile Peachtree &15th-street corner. This continues the effort to give each division its own presence and identity, which began when the High Museum moved out of the Memorial Art Building in 1983.

In this blurry photo of a document titled “Woodruff Arts Center Proposed Master Plan: Final Build-out,” the grey line along the bottom is 15th St. At the bottom right corner, 15th intersects with Peachtree St. The red buildings on the left are the current MARTA train and bus stations. The yellow buildings in the middle are the various wings of the High Museum (the uppermost yellow bldgs.) with the SCAD dormitories below that. Phase I of the new master plan involves the red buildings on the right, with the biggest among them, at the bottom, being the new Symphony Center.

Phase I also answers the ASO’s demands to get a performance space that’s up to national standards. The ASO’s current Symphony Hall is arguably the least appealing and most acoustically inferior among major U.S. orchestras. To help box office and help the ensemble improve artistically, the reasoning goes, a good concert hall is essential. Although Spanish architect Santiago Calatrava is reportedly out of the picture, the WAC has retained the “vineyard”-style auditorium designs created by Chicago’s Kirkegaard Associates and San Francisco’s Auerbach-Pollock-Friedlander theater consultants. To cut costs and allow the auditorium’s already-bulky footprint to fit on the tiny plaza, the ASO musicians and stage crew will continue to use the hive of practice rooms, studios, and offices beneath the current Symphony Hall — except for the ASO Chorus, which will get a new rehearsal space as a part of the new Symphony Center.

To give each WAC division its own identity — and a doorway on Peachtree Street — Phase I also involves the creation of a grander and more direct entry experience for the Alliance Theatre. It involves doing away with the Rich Auditorium, another mediocre room now used for film and lectures, and replacing it with a central corridor from Peachtree. The new entry will be flanked by spaces for WAC’s educational programs, a move that would signal their increased importance in the WAC portfolio. “Education has moved from an activity,” said Bankoff, “to a core of the mission.” Education programs, of course, are noble in their own right and are often easier to fund than purely artistic ambitions, especially with Georgia politicians.

The new master plan reflects the sea-change in the way arts institutions view their missions. When first built, the monolithic Memorial Arts Building was a becolumned temple to the arts. We know what’s good for you; Come and absorb. That kind of authority is out. Visitors want a more active, less intimidating experience, with emphasis on experience.

Today’s master plan embraces New Urbanism (and the Midtown Blueprint) in its respect for the pedestrian, for the street, and the lively environment Midtown has become. No longer a one-stop shopping mall of culture under a single roof, it becomes a mixed-use development, offering social spaces and open spaces aplenty — plazas, restaurants, cafés, retail shops.

Here’s a bonus: Multiple free-standing buildings could mean multiple examples of great architecture. The High has been a good role model. Frankly, although we once supported the Calatrava ASO design, with its origami styling and giant biomorphic arch overhead, its time has passed. It smacks of 90s extravagance, and it wasn’t his best. With him out of the running, there’s plenty of room for creativity and pizazz on this new site, and I’m sure many architects would be thrilled with the commission.