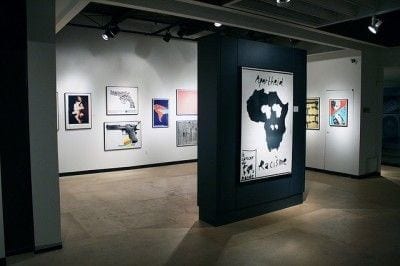 Posters at the Museum of Design Atlanta

“The Graphic Imperative: International Posters for Peace, Social Justice & The Environment, 1965-2005,” which I featured in the AJC on Sunday and wrote about in my first post on this blog, is on view at the Museum of Design Atlanta through Aug. 15, and definitely worth a visit.

The posters deal with important issues of the past 40 years — nuclear armament, civil rights, the AIDS epidemic, Middle Eastern politics, etc.– with a surprising economy and variety of means.

Luba Lukova’s 1999 “Sudan” achieves much with a very simple image. By inserting one of our ubiquitous “nutritional information” charts — all at zeros — in the African figure’s mouth, she telegraphs the shameful contrast between Western plenty and starvation in Sudan.

“Your Lifemeter” by Finnish designer Kyosti Varis and “New Freedom, 2006,” by the Russian AES Group” are part of a series on the fear and paranoia shrouding Western and Islamic relations.