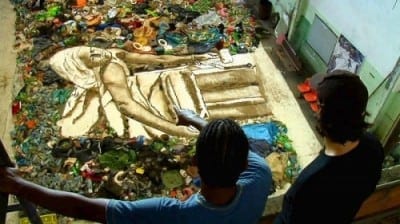 Born poor in Sao Paulo, Vik Muniz found his way out of Brazil, made a home and a family in Brooklyn and entered the “very exclusive, very restrictive” world of contemporary art. A few years ago, he felt an urge to return to his birthplace and use his talents to enrich a hardscrabble community similar to the one he knew as a child. His mission is captured in “Waste Land,” a documentary that won awards at the Berlin and Sundance film festivals. It starts a little slowly but builds to a deeply moving finale that sticks with you long after its running time.

Made from very mixed media, Muniz’s art is a blend of craftsmanship, gimmickry and weird inspiration. His materials have included dirt and diamonds, string, sugar — just about anything, for example his two versions of the “Mona Lisa,” one made from peanut butter, the other from jelly. For his Brazilian project, he decides to make art from garbage — or “recyclable materials,” as we learn is the proper term. What better place to find such things than the world’s largest landfill, Gramacho Gardens? Located on the far edge of Rio de Janeiro and ringed by crime- and drug-ridden favelas, the landfill is a workplace for people who have somehow fallen off Brazil’s mainstream social order. Called “pickers,” they root through the sweaty, smelly mountains of waste, collecting plastic, glass — whatever the recycling wholesalers are willing to buy. “This is where everything not-good goes,” Muniz observes, “including the people.”

As he prepares to fly down and launch his art project in their midst, you can’t help siding with his practical-minded wife. She asks, Is it a safe place to visit? Do you think the workers there will be open to your ideas? (After all, the insertion of a world-famous artist into a colony of hard-luck gleaners isn’t an obvious recipe for harmony.)

Muniz’s quest turns into a sociological as much as an aesthetic experiment as he explores the pungent, sometimes weirdly beautiful humps of the giant landfill. The heart of his project, and the film, is the people he meets — poets and philosophers on the edge of society, all defined by an enormous dignity. (As several of them emphasize, digging through garbage for recyclables is a more noble way of living than selling drugs, or their bodies.) We meet Tião, a young man who has created a union and community center for the pickers, despite skepticism even from his own father. Then there’s Irmã, a staunch old cook who finds perfectly good meat and vegetables in the landfill and stirs up meals over an open fire. “I don’t let anyone go hungry,” she says with solemn pride. Suelem is only 18 but has worked since the age of seven, and has two young children and another on the way. And Isis is a strong-faced beauty who hates working at the landfill and labors under a profound grief that is slowly, movingly revealed as the documentary unfolds.

Muniz takes photographic portraits of them, then, with their help, transforms those images in a massive way. (The process is so interesting that I won’t spoil one of the movie’s pleasures by explaining it here.) His goal is to take the finished works back into the highfalutin art world, sell them for as much as possible, and give that money back to the Gramacho collective. More than monetary gain, the art project has a galvanizing effect on these laborers, who glimpse strengths and talents within themselves that they never knew they had (or got beaten out of them). Staring at his own portrait, Tião says, “I never imagined I’d become a work of art.” Anyone who thinks the arts are of little importance to the spirit and prosperity of a country should be forced to watch “Waste Land.” It reminds us that the greatest waste of all is to undervalue the spirit of every person we meet, no matter their background.