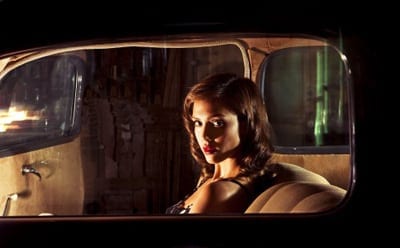 Review: Truth in advertising for Michael Winterbottom’s “The Killer Inside Me”

Think about it this way. You’re watching a standard Hollywood rom-com. Joe meets Jane over a comically spilled cup of coffee. They date, they dance, they picnic in the park, they waggle their noses together in wittle Eskimo kisses. It’s all flowers-and-puppies. Then Joe, in a courteous, puzzled voiceover, tells us that he knows he has to murder the hell out of Jane, he has to kill her way dead — even though he doesn’t quite understand why. It’s just his nature.

That’s the fascinating disconnect of “The Killer Inside Me,” which gives you everything you need to know in its title. (If you’re not paying attention when you buy a ticket, it’s your own fault.) A couple of shades darker than black, it’s a slick slice of American noir, and a ticklish sick joke.

Set in the 1950s when Jim Thompson — that dark-souled poet of American desperation — wrote it, “Killer” stars baby-faced and boy-voiced Casey Affleck as small-town Texas deputy sheriff Lou Ford. Living alone in his family’s rambling old house, Lou appears to be a shining star of the county. As he explains in voiceover (Thompson’s book, likewise, is written in first person), “You’re a man and a gentleman if you’re anything at all.” That’s what you pretend to be, anyway.

In fact, Lou is one bent soldier. He’s got a grudge, see, that has to do with local bigwig Chester Conway (Ned Beatty), who he believes was responsible for the death of Lou’s stepbrother Mike. So Lou is thrilled to find out that Conway’s son Elmer is all tied up with the town’s newest hooker. Lou himself is thrilled to be tied up with that hooker, too. (Her name is Joyce Lakeland, and since she’s played by Jessica Alba, any straight guy would be pretty dang thrilled.) So, see, Lou and Joyce — in between sessions of rough sex — hatch this plan to blackmail Elmer, knowing that Daddy “Warbucks” Conway will pony up the cash.

Up to this point, the plot of “Killer” seems deceptively straightforward (in its serpentine way). We’re accustomed to watching film-noir plots that show desperate characters planning a complicated, usually doomed grift. We congratulate ourselves for following the twists, and sometimes even guessing in advance how it will all turn out. But Jim Thompson had a nastier game plan when he penned his book. This isn’t about plot, it’s about rot — of the mental/moral variety. Imagine if Norman Bates wrote “Psycho” as a first-person account, without the epilogue by that nice psychiatrist, neatly explaining to us the things that turned Norman into a murderous nutbag.

Oh, the movie does throw in some purposefully indistinct hints about Lou. About his stepbrother Mike, who was charged as a teenager with diddling around with some poor little girl (though maybe it was Lou himself who was responsible). And spanking was a central issue in Lou’s boyhood … but not the kind dished out by schoolteachers and angry dads in 1952. The sight of blushing, quaking female buttocks seems to be both Lou’s biggest turn-on and his lethal kill-switch.

British director Michael Winterbottom has weathered a mini-storm of controversy over the violence in “The Killer Inside Me.” And yeah, there are several gut-churning, graphic scenes. Which is the point. Winterbottom is getting ragged for doing exactly what he intended: to show violence for the brutal, blood-and-snot-smeared horror that it is. Buckle up, kids.

The supporting cast is strong, including Beatty, and Simon Baker and Elias Koteas as a couple of guys who start to smell the rat beneath Lou’s Boy Scout exterior. Then there’s Alba, and also Kate Hudson as Amy Stanton, Lou’s white-glove-wearing putative fiancée. In limited roles, both women are terrific. I never thought I’d say that about either of them, especially Hudson, after her one-film peak in “Almost Famous.” Affleck, amazing in that long-titled Jesse James movie three years ago, is coolly dazzling here as a bring-him-home-to-mama boy-next-door with sewage secretly pumping through his veins.

Some people grumble that this movie leaves them cold, that they can’t really understand Lou, or sympathize with him, or get inside his head. Yes, folks, that’s what the movie is about. Look for giggles and hugs elsewhere. (I hear there’s a Mormon comedy out there about a vampire and a werewolf in love with a clinically insane teenage girl, which sounds like sure-fire hilarity to me.)

I don’t mean to oversell “The Killer Inside Me,” just to try to give it the props it earns. With his view of the man-animal as a cornered, dangerous whelp trying to act like pick-of-the-litter just to survive, Jim Thompson isn’t easy source material for the movies. “Killer” can’t beat Stephen Frears’ Thompson adaptation, “The Grifters” (1990). But “The Killer Inside Me” is a good attempt. In case you find yourself jonesing for more of Thompson’s bleak worldview, you might also check out 1990’s “After Dark, My Sweet” and Bertrand Tavernier’s “Coup de Torchon” (1981).