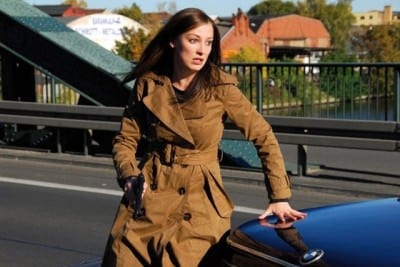 Muscular and polemically ablaze, “The Baader Meinhof Complex,” a foreign-language Oscar nominee, can be a confusing rush of information. Especially for anyone without a firm background in the wave of domestic terrorism that swept Germany in the late 1960s and early ’70s.

Director Uli Edel’s film crams a lot into its two-and-a-half-hour running time, showing us the initial stirrings of the so-called Red Army Faction, its literal explosion in the streets of Germany, and the fretful, martyr-wannabe fates of its leaders.

Forget the typical movie with a single hero or heroine. Trying to portray this multi-headed political organism, “The Baader Meinhof Complex” focuses on one figure, then moves to the next once he or she is sidelined by prison, death or both.

Our entry point is journalist Ulrike Meinhof (Martina Gedeck, of “Mostly Martha” and “The Lives of Others”). A wife and mother of two girls, Ulrike is initially seen reading a just-published column at a garden party of comfortable, like-minded intellectuals.

Soon, though, she’s attracted by the law-breaking actions of Andreas Baader (Moritz Bleibtreu) and his girlfriend Gudrun Ensslin (Johanna Wokalek). Some of the best scenes involve Meinhof’s gradual seduction to activism, her transition from the objective, observing life of a journalist to that of being a catalyst of the kind of news she once reported.

The RAF initially forms as an angry response to U.S. involvement in Vietnam. But a major impetus for these young people is deep mistrust of their own parental generation, who either participated in Third Reich atrocities or collaborated as good Germans who, in that damning phrase, were only following orders.

Gudrun’s minister father and mother are seen as sweetly if misguidedly complicit in supporting their daughter’s radicalism. Outside a courtroom, they tell reporters about their daughter’s “almost euphoric self-realization” on burning down a department store.

“Complex” doesn’t delve too deeply either into psychological profiles or historical context. It ratchets forward with hammer-blows of action and rhetoric. Swift but at times overwhelming, it’s the opposite of the standard, spoon-fed Hollywood biopic. For better and worse.

Director Edel is a film veteran still remembered (fondly?) for his harrowing look at teenage homelessness and drug addiction, “Christiane F” (1982). (Let’s all give him amnesty for his grab at Hollywood: the ludicrous, Madonna-headlining “Body of Evidence.”) Here his direction is impassioned. But “The Baader Meinhof Complex” is likely to send you online to check out RAF history on Wikipedia, rather than to a café to discuss the movie with friends.

Still, there’s something as exhilarating as scary about that period, when idealists — even as horribly misguided as RAF members became — acted from genuine beliefs and when political debate wasn’t stage-managed from behind the scenes by corporate interests and me-first billionaires.