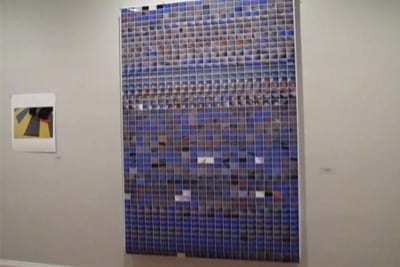 The cell phone as artist’s tool: ‘on the flip side’ at Atlanta’s Spruill Gallery

Cell phones continue to evolve as an increasingly important tool of communication. “on the flip side,” an exhibition at Spruill Gallery in Atlanta, looks at artists who embrace these now ubiquitous gadgets and turn them into tools for creativity. Pushing beyond their common use of capturing digital photographs and video, curator Hope Cohn also introduces us to artists who draw, sculpt and compose music with these devices.

New Yorker Jorge Colombo sketches the urban landscape of his adopted city on his iPhone using an application called “Brushes.” These modern-day plein-air sketches have an astonishing painterly feel, even though Colombo does not use a brush and his final output is not on canvas but in the form of an archival pigment print. A video situated in the gallery shows the artist at work and reveals the deft variety of mark making he was able to achieve using only his finger on the small touch screen.

Music lovers will appreciate Gil Weinberg’s superb “ZOOZbeat.” Director of Music Technology at Georgia Tech, Weinberg invented this application, which turns your hand-held device into a music studio. Choose a backbeat, then shake it, tilt it, tap it or bang it on a table if you dare, to layer different instrumental tracks on top of one another. “ZOOZbeat” is commercially available, but word has it that exhibition visitors will get a sneak peek at a version that hasn’t yet been released on the market.

Sculptor Rob Pettit takes a completely different tack with his sculptural installations using discarded cell phones. His geometric arrangements are quite beautiful, but their underlying message reminds us of the environmental impact of this rapidly changing technology that requires we buy new hardware every couple of years.

There is also a room with outtakes from CNN’s “iReport,” showing how even amateurs can become reporters with the use of a phone’s video feature. Unfortunately, this is where the show breaks down a bit. This “everyman is an artist” feels out of place in an exhibition that celebrates artists who push this tool to a new level.

The contrast to this is professional photojournalist Shawn Rocco, beloved Atlanta photographer Lucinda Bunnen, and ACP Program Manager Michael David Murphy, who all capitalize on the unobtrusive and quick nature of camera phones. Their images capture fleeting moments that would not be available to someone holding a more cumbersome apparatus.

Unfortunately, Rocco’s 25 x 31” C-prints did not tell me anything about how he sees this medium differently from the traditional camera. Bunnen presented her small prints matted in a grid, as if she envisioned them as a series of family snapshots. Michael David Murphy went even further.

Setting his phone on the dashboard of his car, he programmed it to take a picture of the sky at specific intervals as he drove to work, ran errands or went out at night. Back in his studio, he composed two grids on the computer, one of 1,056 cells and the other 1,300, which he then output onto roughly 7-by-4-foot inkjet prints that were casually tacked to the wall.

Even with the difference in scale, Murphy’s thoughtful presentation seemed a wink and a nod to the working 8-by-10 proof sheets that were historically part of any photographer’s trade. This acknowledgement of the past while embracing the future seemed the perfect summation of the innovations and byproducts introduced in this innovative exhibition.