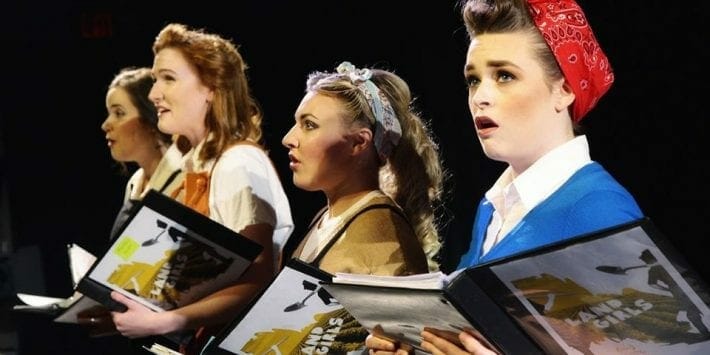 "Land Girls," from last summer's event, told a story of friendship and perseverance during the World War II era of big bands and Rosie the Riveter. (Courtesy of the festival)

The Atlanta Musical Theatre Festival has announced the four-show lineup for its fifth annual event and — as of this moment — plans to proceed with in-person August gatherings at Theatrical Outfit.

The festival plans to implement safety measures for artists and patrons that will include, at a minimum, required masks, hand-sanitizing stations and socially distant seating. The festival team is monitoring Covid-19 and will make adjustments as necessary, artistic director Jeff McKerley said in a statement.

Festival passes and single tickets will go on sale soon, with shows scheduled to debut August 3–4 and 10–11. Theatrical Outfit is on Luckie Street in downtown Atlanta. The offerings, McKerley said, range from Afro-futurism to steampunk and from country music to choral music.

To date, the festival has showcased 15 new musicals seen by more than 2,000 theatergoers. The 2020 shows:

BOOK, MUSIC, LYRICS by Gretchen Suarez-Peña, a Florida-based playwright, director and actor. Plot: The setting is the steampunk town of New Comen where Jacob, an esteemed heir, is in love with a lower-class girl named Mara, an aspiring vocalist. Their love is a fairy tale until a woman named Melina arrives and a love triangle, ending in heartbreak, ensues. New Comen faces political turmoil and the fabric of time hangs in the balance. Years pass, life takes twists and the fates of their offspring become intertwined.

BOOK, MUSIC, LYRICS by Dana Lamb–Schaubroeck, who teaches at Flat Rock Middle School in Tyrone. Plot: SATB the Musical asks, “Who decides if you’re worthy of love?” This unusual love story follows members of a church choir who discover that the collective sum of their humanity is worth more than their personal imperfections and challenges. The principles of Christian love and acceptance go head-to-head with racism, political ideology, affairs, orientation, mental health and tradition.

Angels of the Southern Accents

BOOK, MUSIC, LYRICS by Rus McCoy. Tells the story of journalist–author–rebel–feminist Margaret Mitchell (Gone With the Wind) and reveals a secret that was held for three decades after her death in 1949 at age 48.

A Song for Adaeze

MUSIC, LYRICS by Chiwuzo Ife Okwumabua and BOOK by Sunni Williams. Plot: A chance encounter with a mysterious individual from another dimension challenges a young woman with a royal legacy to defy the status quo. The resulting chain of events can either destroy or revitalize the world she has come to love. Okwumabua is founder and executive director of Atlanta-based Chi Ife Productions, a multipurpose production company.