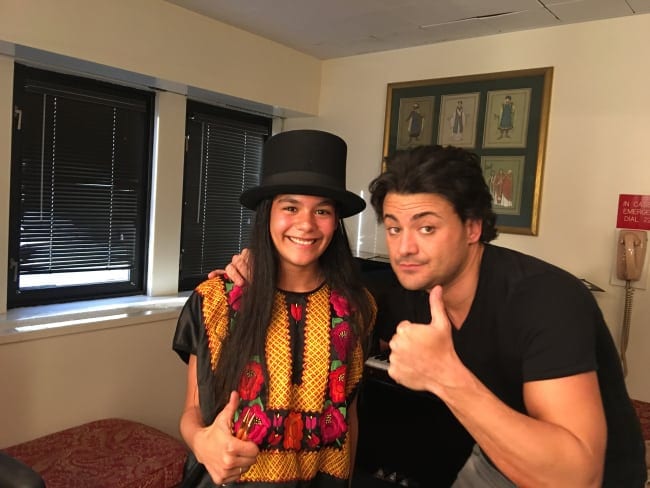 Stars are twinkling up in the sky.

It’s time for you to go beddy-bye.

to sing you an opera lullaby.

When mezzo-soprano Denyce Graves sang a parody of “La Habanera” from Bizet’s Carmen to one of  Sesame Street’s most beloved residents, it was light’s out for Elmo in three minutes flat. But as the fuzzy, red monster grew more and more heavy-lidded under Graves’s spell, something was awakened inside a two-year-old viewer named Layla Felder.

Eleven years later, Felder is an opera devotee, advocate and one of the youngest ambassadors for the 500-year-old art form. She will be in the audience for the Atlanta Opera production of Giacomo Puccini’s Turandot, which begins a run April 29 at the Cobb Energy Performing Arts Centre. After attending nearly 100 operas in the United States, Austria, the Czech Republic, England, Germany and Italy, Felder admits that her youth makes her the oddball in concert halls where, she estimates, the average patron is “60 or older.” But she believes it would be a mistake to dumb down librettos in an effort to attract a younger demographic.

“A lot of people believe that children lack long attention spans, or cannot understand all the ‘super-complicated topics’ that make up opera’s canon,” she says, using air quotes for added emphasis. “But it’s not that difficult to understand. La bohème, for example, is about a woman who is sick and falls in love with a guy. They stay in love for most of the opera, get into a fight, break up and she dies at the end. It’s really that simple.”

Simple plots notwithstanding, Felder recommends introducing kids to short clips of arias, followed by full scenes, before progressing to a magnum opus.

Using food as a metaphor, she says that expecting a child to digest highly sophisticated material would be akin to expecting a newborn to process raw vegetables. “You have to start with milk, then go to pureed foods, then harder and harder foods until the kid can eat practically everything,” she says. “You can’t just take a three-year-old and be like, ‘Here’s a Wagner opera: watch it and enjoy.’”

When asked to demonstrate her physical response to hearing opera, Felder, who is prone to random acts of physical comedy, lets her entire body go limp as she slides from her perch and puddles into a heap on the floor — the way Bugs Bunny might when falling in love, or overcome by ether. She gets starry-eyed when the topic turns to romance languages, saying, “I know people believe French is the language of love, but the undulating tones of Italian are so soft on the ear.”

She turns dead serious when contemplating the prospects of an artistic expression that requires patience on the part of a listener given the reality of a popular culture that is built on one-hit-wonders. “I don’t want to replace pop music,” she says. “I just want to bring attention to opera so it can be popular again. Opera and art [Felder is mad for Frida Kahlo and all forms of visual art] have created the best parts of me. I don’t know who I’d be without them.” Felder and a member of her Kids Opera & Art Posse taking in a performance at the Atlanta Opera. (Photo courtesy of kaopweb.com.)

When asked to make a presentation to her classmates at Atlanta International School on the theme of Finding Your Path recently, Felder chose to talk about her first love. Anthony Gillett, who teaches at AIS, remembers being struck by the seventh-grader’s confidence and willingness to be an individual at an age when most children are inclined to seek comfort in conformity. “Aside from the students watching and listening to Layla [that day],” he says, “I think some teachers were inspired as well.”

When it dawned on Felder that opera would die without support from future audiences and patrons, she founded the Kids Opera & Art Posse (KOAP) in 2011 to introduce her peers to the tradition. The group has raised over $23,000 to support the Metropolitan Opera HD Live in Schools program. And the KOAP website has an even broader reach — allowing followers to check out a virtual scrapbook of Felder’s musings and announcements about opera and other art forms.

Members of the Kids Opera & Art Posse attend the Atlanta Opera en masse. And Felder has organized group excursions to New York City so her posse could experience live performances at the Metropolitan Opera House.

Atlanta-based fans of the Met’s Live in HD telecasts know Felder as the young girl who distributes librettos, answers questions and makes welcoming remarks prior to monthly screenings at the AMC Dine-in Theatre Buckhead. But what they don’t know is that when the Met named her an ambassador three years ago, she was the youngest person to receive the designation in the company’s history.

Peter Gelb, general manager of the Met, calls Felder a prophet for opera. “Layla is a one-woman orchestra of support and talent,” he says. “Her devotion to opera would be extraordinary at any age, but to have someone so young interested, energetic and excited about her connection to the Met gives hope to all of us for the art form. We [at the Met] love her and applaud her efforts.”

In Atlanta, Michael Rooks, the Wieland Family Curator of Modern and Contemporary Art at the High Museum, says that his curatorial goals align seamlessly with Felder’s mission at KOAP — to make art accessible to everybody. “Layla’s combination of seriousness, desire to learn and her own erudition at this young age is impressive,” he says. “And adults respond in kind.”

Visual artist Daniel Arsham is a prime example. After meeting Felder (at Rooks’s suggestion), he cast her to record the voiceover portion of his Hourglass installation, currently on exhibit at the High. Given her reputation among arts leaders and aficionados, it’s easy to forget Felder is a teenager until she waxes poetic about her idols. “I get crazy star-struck when it comes to opera singers,” she says. “I’ll usually get a hug or a photo [backstage, post-performance] — at which point I am overheating and hyperventilating. I’m actually sweating right now just thinking about it.”

She calls Latvian mezzo-soprano Elīna Garanča “one of the nicest singers you’ll ever meet!” Polish baritone Mariusz Kwiecień is her opera crush “because he is so funny and cute!!!” And, in her mind, Kristine Opolais’s death by samurai suicide in Madama Butterfly is a master class in how to shuffle off this mortal coil.

“I know it sounds terrible, but some singers are so good at dying that I don’t cry [when their character dies] because it’s so beautiful,” she exclaims.

Ironically, Felder has yet to meet the woman who ignited her passion for opera. But after Graves viewed a short film by AT&T that profiled Felder as a champion of opera and the arts, the 13-year-old can now count a diva as one of her biggest fans. “I watched that beautiful little creature dance around the opera house [in the video] with great interest this morning,” says Graves, who was reached by phone between rehearsals for Eugene Onegin at the Adrienne Arsht Center in Miami. “She saw something that reached inside of her and resonated with her. I am enormously proud of Layla for following her intuition, and for being proactive in wanting other people to have the same experience.”