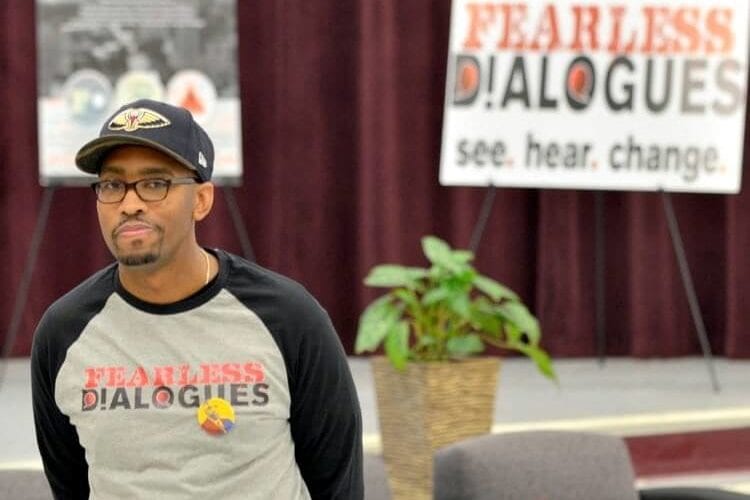 Three days after a jury acquitted George Zimmerman in the shooting death of Trayvon Martin, Emory professor Gregory C. Ellison II extended an unexpected invitation to radio listeners: “I think we should have a community conversation. Let’s all meet at Emory this Saturday.”

On the heels of that contentious verdict, scholars, educators and thought-leaders like Ellison, an associate professor of pastoral care and counseling at Emory’s Candler School of Theology, were called upon by the media to share their insights. When Ellison blurted out his invitation during a guest appearance on Atlanta public radio in the summer of 2013, he was speaking from the heart and, he says, “totally off the cuff.”

Ellison understood that the inclination during such conversations is often to shout rather than to listen, making the possibility of productive communication remote, if not impossible, for even the most well-meaning participants. But he and the 300 Atlantans who answered his impromptu call-to-action at Emory a few days later were determined to try a new tack. In the process, they planted the seeds for a grassroots initiative called Fearless Dialogues.

Ellison didn’t know what to expect at that initial eclectic gathering of Emory students, faculty, parents, elected officials, lawmakers and street characters who showed up to brainstorm on how they could improve the lives of young black men. Likewise, attendees didn’t know what to make of their host’s opening request to fill out name tags listing their “gifts” — the options were healer, artist, educator, connector or neighbor — as opposed to their occupations or professions. Next, guests were asked to speak to the people whose titles, or gifts, matched their own.

“What happened in that space on that Saturday,” says Ellison, “was that a judge [who’d self-identified as a healer] immediately found common ground with a drug dealer [whose name tag also read healer]. Now just imagine what would have happened if their actual titles had been listed? Not only would they have self-segregated, but the drug dealer would have stayed as far from that judge as humanly possible!”

The experiment strengthened Ellison’s conviction that if you cannot see another individual as a person of worth, there’s no way you will hear their story as valuable. And if you cannot hear their story, it’s impossible work toward communal change. After a connection is established, he says, the “shared bond that exists becomes apparent and once you see, you cannot not see.”

The 90-minute test run was such a hit that Ellison watched in amazement as participants lingered in the parking lot 90 minutes after the program had concluded just to extend the groundbreaking conversations they’d begun.

Nearly five years later, Fearless Dialogues is a formalized program rooted in three principles: See. Hear. Change. Its mission is to “create unique spaces for unlikely partners to engage in hard, heartfelt conversations that see gifts in others, hear value in stories and work for change and positive transformation in self and other.” Ellison now leads his dialogues in locations around the world. Participants have described the experience as transformative.

Although social and racial justice were the impetus for starting Fearless Dialogues, the program has evolved to encompass issues surrounding class, homophobia and the otherwise voiceless. So far, 20,000 people have taken part in seminars conducted in North America, South America and the Caribbean. Ellison estimates about 500 new participants per month in 2018. Alumni include the Georgia Council on Developmental Disabilities, Atlanta Police Department and the Atlanta Hawks. But the program has also been embraced by clergy, corporations, middle school pupils at Drew Charter School and high-schoolers at the Lovett School, where 1,100 people including students, teachers, alums, administrators, trustees, cafeteria and security staffers engaged in a series of Fearless Dialogues during the 2016–17 school year.

Ellison is also the author of a new book about his program, entitled Fearless Dialogues: A New Movement for Justice. He’ll read from the book, speak about his work and lead attendees in a brief dialogue activity at the Atlanta History Center on January 11.

Jeny Mathis, an Atlanta-based yoga instructor, attended a Fearless Dialogue seminar at Emory last year and considered the experience life-changing. “I’d hoped to gain experience that would help me with the work I’m doing,” she says. “My take-away is that we are all missing opportunities to connect with people everyday. There are people we do not notice, hear and truly see in our everyday experiences, and the not-seeing is causing a disconnect in our communities.”

Ellison likens his work to that of a scientist and considers each seminar a laboratory of discovery. “In any good laboratory,” he says, “things have to blow up or break down in order to achieve a breakthrough. Our system is designed to evoke emotion and catalyze deep and engaging conversation. The variable is people. You never know what will come out.”

A perpetual student, Ellison claims to learn something new every time he leads a session. He has become more mindful about reversing seemingly small acts of benign neglect that can thwart human connection — making it a point to hang up his cell phone when engaging shopkeepers, cashiers or the waitstaff in restaurants so he can look them in the eye and give them his undivided attention. “You see how people respond when you give them the smallest amount of positive regard,” he says. “They invariably put me in a position to receive a gift in return.”