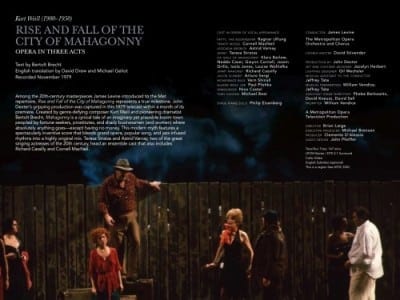 Editor’s note: This review concerns the Metropolitan Opera’s recent releases of two major box sets of DVDs and CDs. These fascinating archival recordings, consisting mostly of previously unreleased material, are being issued to celebrate the 40th anniversary of music director James Levine’s debut with the company. They’re available in box sets from the Met shop (and cheaper elsewhere on the web). First up is Thomas May’s review of Kurt Weill and Bertolt Brecht’s “Mahagonny” from 1979. — Pierre

“Rise and Fall of the City of Mahagonny” is a tricky icon. While generally recognized as a landmark of 20th-century musical theater, the work has faced an identity crisis from the start. Its premiere in March 1930, in Leipzig, was notoriously threatened by followers of the growing Nazi movement. But this most ambitious of the Kurt Weill-Bertolt Brecht collaborations didn’t just expose tensions within Weimar Germany. It also brought the steadily simmering resentment between composer and librettist to a boil. 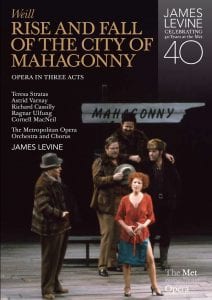 Brecht eventually denounced “Mahagonny” as “culinary opera.” (Ironically, in its earlier incarnation as the cantata “Mahagonny-Songspiel,” the idea was what drew the two together in the first place.) Brecht complained that the music undermined his goal of epic theater and social critique. In a sense, it all comes down to another variation on the eternal tug of war between words and music. But the situation has a unique twist, because Weill supplied a score whose ingredients are intentionally contradictory. While he adds a poetic depth to Brecht’s aggressive, acid-tinged portrayal of capitalist dystopia, Weill himself subverts the expectations of grand opera through the score’s polymorphous stylistic perversity. Is “Mahagonny” opera or anti-opera?

Naturally, there’s no doubt as to which side wins out in this production from November 1979, which marked “Mahagonny’s” debut at the Metropolitan Opera. The only earlier performance included in the DVD box set celebrating James Levine’s four decades at the Met is that of “The Bartered Bride” (1978, and also featuring Teresa Stratas, for a fun comparison). “Mahagonny” represents a significant instance of Levine’s efforts to expand the Met’s repertory — one arguably even riskier than its premiere of “Lulu” two years before. And the very fact of its being staged at the Met, in a version that was likewise telecast on PBS, makes this a milestone in the reception of “Mahagonny” — even if the real interest here remains primarily musical. The opera is sung in English, using a serviceable-enough translation by David Drew and Michael Gelio, made in the 1960s.

“Mahagonny” is one of those pieces, like the “1610 Vespers” of Monteverdi, where you can anticipate a lot of the interpretive direction at the outset from the choice of performance parameters: above all, in this case, to opt for a cast of opera performers versus a mix-and-match of opera and cabaret style or “show-biz” singers, as in, say, John Doyle’s Grammy-winning 2007 production at Los Angeles Opera. And the Met goes for full-on luxury casting to boot, further amplifying the “pro-opera” approach of this production by John Dexter.

The choice pays sizable dividends. While Andrew Porter’s claim that “Mahagonny” is nothing less than a “20th-century ‘Ring’” may be a bit inflationary, Weill’s larger musical ambitions come to the fore with the vocal characterization by leads Teresa Stratas, in the role of prostitute Jenny Smith, and heldentenor Richard Cassilly as her lumberjack lover, Jimmy Mahoney. Cassilly’s scene at the top of the third act approaches the forlorn dark night of Florestan in his dungeon.

Of course, bargaining over money frames how the pair hook up and break up, so their love scene — part of the parable-like sequence of life’s pleasures in Act 2 — is a surprisingly touching but momentary oasis (the production uses the lovely “Crane Duet” over which Weill vacillated). Stratas is rightly admired for making Jenny a signature role: she somehow tinges her lyrical portrayal with just the right degree of hardness, avoiding clichés of the tough-as-nails whore. There’s a uniquely vulnerable ambiguity in her final betrayal of Jimmy, for example, that takes us well beyond the preachy realm of Brecht’s caricatures. Lotte Lenya, Weill’s widow and a famous Jenny in her own day (her first rendition was in 1931 in the Berlin production), was around for rehearsals and reportedly gave her imprimatur to Stratas’ take on the role.

On the other hand, it’s almost as if the production inserts an unintended level of Brechtian irony via the larger-than-life vocalism of much of the supporting cast. Astrid Varnay, as the widow Leocadia Begbick, along with Cornell MacNeil and Ragnar Ulfung, who play her crafty accomplices Trinity Moses and Fatty the Bookkeeper, might almost be refugees from Valhalla as they go about founding their city devoted to earthly pleasure. Dexter’s direction in particular lacks a convincing point of view, occasionally straying at most into a tepid psychological realism that’s obviously out of place.

Even more ironically, Jocelyn Herbert’s design mimics Brecht’s own prescriptions — poker-face captions and all — and simply fails to try to take account of the vastness of the Met stage. Yet the Brechtian side of the equation is exactly the production’s weak spot, and the resulting visual drabness reads almost like a misplaced period piece. Weill himself referred to the city as the opera’s true protagonist, but Mahagonny never really comes to life as a character in this staging. The audience’s well-behaved applause between numbers only underscores the dissonance between the originally subversive aims of “Mahagonny” and its status as an artwork. It’s another weird “alienation effect.”

So the music is really the thing in this production. And Levine is in especially fine form as he digs into the myriad details of Weill’s score. In one of his tantrums, Brecht was said to have yelled at Weill for being a “phony Richard Strauss.” Strauss is actually one of the last composers whom Weill’s mélange of styles from Mozart (especially “The Magic Flute”), neo-baroque counterpoint, Stravinsky, jazz and nightclub brings to mind. Curiously, though, the conductor faces a challenge not unlike that of “Ariadne auf Naxos” in trying to make all this stylistic diversity cohere.

That, at any rate, is Levine’s approach — as opposed to accentuating the discrepant musical idioms — and it yields moments of astonishing beauty. Sometimes the different idioms come together in one number, as in “Alabama Song,” where the harmonic instability alternates with the show-bizzy G major schmaltz of the main tune. After Jimmy has been executed for not having money to pay his debts — a capital crime in the city of Mahagonny — the finale here plays as an ironic requiem, and Levine homes in to the Mahlerian precedent (the Sixth Symphony) for Weill’s bleak march. Instead of Brecht’s anti-capitalist agit-prop, the image that emerges is more disturbing as well as deeply grounded in operatic tradition. 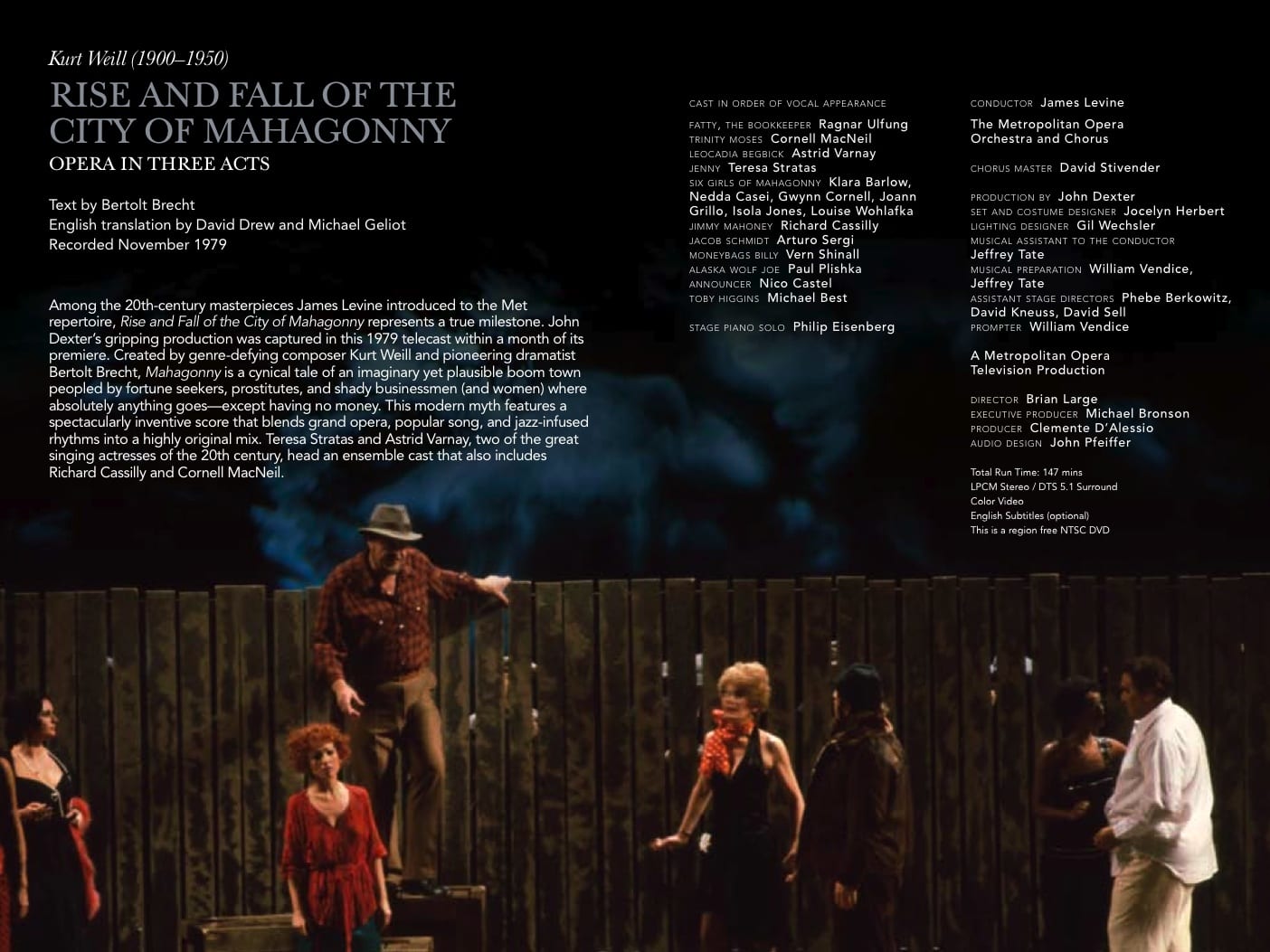