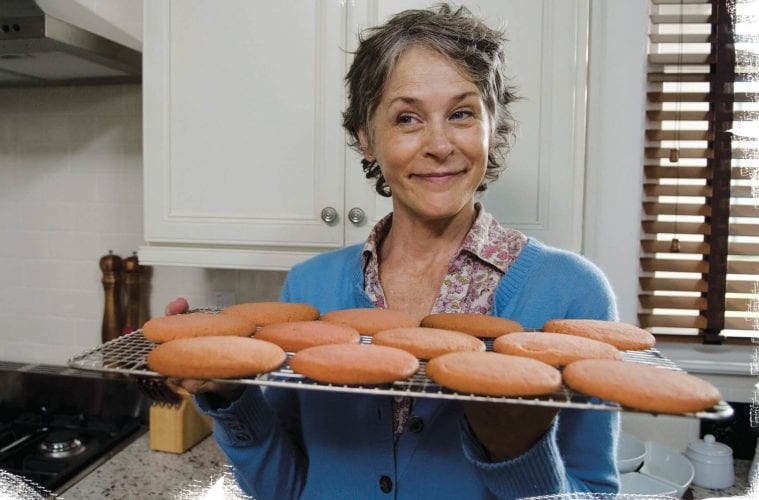 AMC’s post-apocalyptic hit The Walking Dead, filmed in and around Atlanta, spends more time on zombie attacks and moral dilemmas than on the finer points of cooking. Rick Grimes and his fellow survivors face such limited resources following the fall of civilization, they struggle to find anything edible, let alone tasty.

While The Walking Dead: The Official Cookbook and Survival Guide might sound like a joke, it actually offers a fairly straightforward collection of recipes and, as the subtitle indicates, how-to tips for finding sustenance amid social collapse and marauding “walkers.” 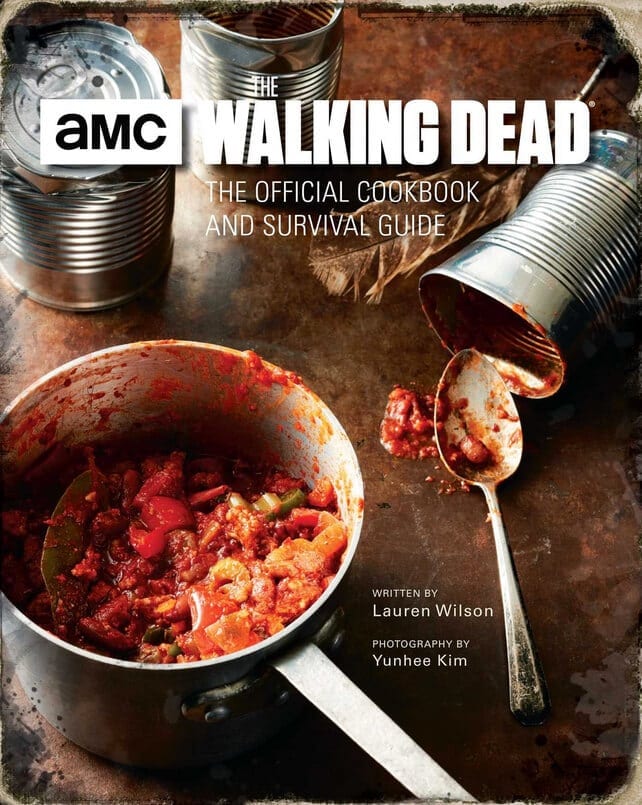 Don’t pick up the book expecting “To Serve Man” puns or the kind of fake-grisly recipes that stock Halloween parties. Perhaps the only self-consciously comedic one is “The Walker,” a bourbon cocktail recipe. Instead, author Lauren Wilson takes the project fairly seriously, having previously addressed the topic in  2014’s The Art of Eating through the Zombie Apocalypse.

The book’s first section, the survival guide, offers introductory tips for doomsday preppers or readers interested in how to survive without well-stocked grocery stores or functioning power grids. As with a scouting handbook, Wilson walks through topics like shelf-stable foods, drinkable water and the basics of hunting, foraging, preserving and gardening.

Featured in glossy photos, the show’s characters and settings provide points of reference. The book doesn’t dwell on the decaying appearance of zombies, or “walkers,” but can offer some grisly metaphors. Mentioning how to skin rattlesnake like Daryl Dixon (Norman Reedus), Wilson says, “The skin can be pulled off like a very tight stocking.”

The Walking Dead Official Cookbook devotes recipe chapters to breakfast, dinner, “sweet treats,” beverages and food preservation. Reading them, you can imagine the author either binge-watching the show or plumbing the depths of online recaps for any depiction of meals, snacks, gardening or farming, no matter how tenuous, that she can hang a recipe on.

Many of the show’s principle characters have dishes named for them, which can be odd in the case of ruthless murderers like the baseball bat-wielding Negan (Jeffrey Dean Morgan). Inspired by a scene with Negan eating spaghetti, “Negan’s Spaghetti all’Arrabbiata” is a fairly straightforward recipe: the only ingredients are olive oil, garlic cloves, tomato paste, chile flakes, dried spaghetti, salt and a can of chopped tomatoes.

“Arrabbiata” means “angry,” suiting the character’s volcanic personality, but I went easy on the chile flakes (which still made my mouth tingle). The recipe produces a good sauce, if a little more simple than I normally make – which makes sense, given the constraints on the characters.

I found that “The Governor’s Welcome Scramble” (named for a villain on one of the earlier seasons), despite the grandeur of the name, is just scrambled eggs and toast. The recipe calls for thorough whisking and butter, so it upped my egg game, but also seemed more like a breakfast basic than something more demanding and flavorful. Many of the recipes could be helpful for beginner cooks, especially Walking Dead fans who should spend more time in the kitchen than the TV room.

For a dessert, I made the “Georgia Peach Crumble,” which lacks a strong TV connection: “Georgia is known for its tempting, juicy peaches, which is why we’ve seen them pop up on the show.” Honestly, the crumble didn’t quite come together, as the buttery, sugary topping stayed floury and never crisped up in the oven. I blame my own lack of baking finesse, but it definitely led to some flavorful cooked peaches.

The Walking Dead Official Cookbook never demands that readers follow recipes to the letter, and in fact encourages them to use more conventional substitutes in dishes like “Squirrel Piquante,” should squirrel be hard to come by. With incongruous dryness, Wilson makes suggestions like, “In nonapocalyptic settings, feel free to add more ‘exotic’ ingredients like button mushrooms or parsnips.”

Some shows, like The Sopranos, readily lend themselves to tie-in cookbooks. Between the gangland skullduggery, the HBO show was practically a celebration of Italian cooking, with the Pork Store providing a primary location. The Walking Dead may not be quite such a no-brainer. But should the end times occur — whether the undead are involved or not — The Walking Dead Official Cookbook will likely be more useful than all the other tie-in cookbooks on your shelf.