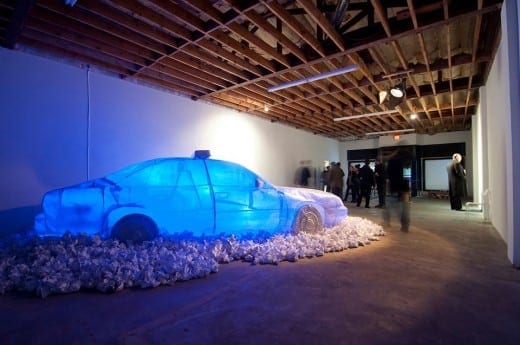 Dialogue: Conflict/Resolution, at Dashboard’s 31–33 North Avenue space through March 20, was moved ahead in the exhibition calendar by more than half a year when events in America made its topic seem particularly urgent. Given this circumstance, it is surprising that it is as coherent, professionally presented and intellectually challenging as it is. Though not without flaws, the exhibition is thought-provoking, and Ruth Stanford’s Deliberation is nothing short of stunning.

The return of open and obvious racial conflict motivated the accelerated schedule, and the three artists dealing with the theme present an astonishingly fresh perspective on this perennial burden of American history.

Dr. Doris Derby’s photographs of less-remembered high points in the civil rights struggle in Mississippi circa 1970 provide a historical perspective that focuses (literally) on the roles played by African American women. Michi Meko’s adjacent installation requires a bit more contextualization. Pots and Kettles delivers different messages depending on when the visitor happens to encounter it. The work consists of a series of pedestals displaying various pairs of kitchenware. At one moment, the barely audible soundtrack embedded in one of the pots is heard reciting “black, black, black, black, black,” in an obvious reference to the cliché. At another, nothing can be heard but confused shouting. At still another, phrases emerge from multiple overlaid voice tracks, among them words from George Wallace’s “segregation forever” speech from 50-odd years ago.

The artist had begun to produce a sound piece in which he mixed 15 tracks of himself performing bits of hate speech from the Internet. Finding this too psychologically devastating to produce on a tight deadline, he collapsed most of the project into a cacophony of unintelligible yelling.

Pots and Kettles illustrates a fundamental problem with time-based work: visitors will come away with completely different notions about the piece depending on what moment they encounter it and how much time they spend listening. In a society of ever shorter attention spans, this is likely to be no more than a few seconds.

A similar problem of attention span both confirms and undermines the conceptual message of Matthew Maher’s adjacent installation An Angsty Cocktail Party. The closed room is designed to force the viewer to decide whether to watch a video through a peephole that reveals almost nothing or to enter the installation and engage in total immersion in the scene of light-filled chaos that fills the screen.

Neither solution is satisfying to the viewer because the artist intends both of them to provoke discomfort. But the success of this intention results in the failure of his other hoped-for result: the viewer’s response to the video’s story line.

The discomfort likely limits how long visitors will watch, and they are as likely to view a few moments of the artist assembling mannequins as they are to be plunged into the anxiety-provoking mannequin party that is the video’s main plot device. Ruth Dusseault’s video Theory of Killing, a scene of noisy combat including a child soldier fighting alongside adults, is realistic enough that visitors might assume it is documentary. One might have to read the wall text to discover that this is a paintball game and to understand that the piece is a comment on what the popularity of fantasy combat says about contemporary society.

The issue of how much information is required to begin a dialogue comes up again and again in this exhibition, perhaps in ways that the organizers did not intend. Johnny Drago’s Another Day is a performance about conflict in marriage that occurs only three times during the run of the exhibition (the final show is March 13). What is on show in the meantime is a stage set, a bedroom containing an uninterpretable slideshow and music soundtrack. The scene is atmospherically dramatic but meaningless (though it suggest how little evidence we usually see of marital tension).

Deliberation, Ruth Stanford’s two-part exploration of the tragedy of Ferguson, Missouri, presents two views of the grand jury investigation into the police killing of Michael Brown. In the gallery, a semitransparent sculptural cast of a police car, illuminated by an interior rotating blue light, is surrounded by crumpled sheets of paper on which are printed every word of the 5,000 pages of testimony presented to the grand jury.

Outside in the community, in different sites on different dates, an actual retired police car is on display, with a large part of the grand jury testimony etched by sandblasting into its surface. Signage on site alerts passersby as to the meaning of this intervention in their daily routine.

Perceptively prescient in her bewilderment at the ambiguities that the grand jury confronted, the artist confronts us with a work that provides a metaphor for the volume of contradictory evidence, in a format that no viewer is likely to peruse in detail. On closer inspection of the textual evidence, an event that stirred anger becomes a case that calls for long and reflective contemplation regarding the implications of the event, and this realization is what Stanford has sought to convey.

The entirety of Dashboard’s show aims for that kind of reflective contemplation about conflict and resolution. To this end, it will feature an appearance by Conflict Kitchen from Pittsburgh on March 12. Conflict Kitchen, which offers food and culture from countries in contestation with the United States, will provide an evening of Palestinian cuisine and discussion of the conflict between the Palestinian Authority and the State of Israel. For tickets and information about other programs, click here.