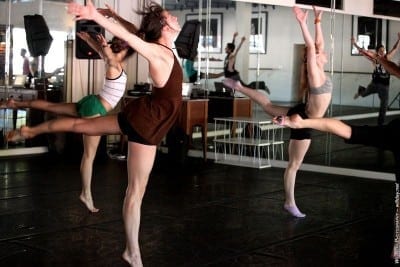 Six Atlanta dance companies will share the Alliance Theatre stage with students in Dance 101’s annual production, “Incarnation,” July 31 at 8 p.m. and August 1 at 2 and 8 p.m. The guest artists appear alongside 13 works created by Dance 101 faculty. I have reservations about these sorts of variety-show recitals, because the dance styles range from ballet to contemporary dance, tap, hip-hop, and pop — think Britney Spears.

But this is not a typical recital: there are no kids, and no beginners. Plus, director Charles “Bubba” Carr integrates live choreography and video projections throughout the show to create a narrative thread — one man writing his life story — that ties the individual pieces together as phases in the man’s life and facets of his character. The sequence of emotions the dances portray becomes, as Carr puts it, “an abstract journey of the soul of creativity.”

Of the six guest companies, Lauri Stallings’ gloATL ushers in the evening with an outdoor, site-specific work and will return to offer the program’s finale.

Also featured is a premiere by T. Lang (upside down, at left), artistic director of Spelman Dance Theatre. Lang moved to Atlanta less than a year ago after successfully directing her own New York-based modern dance company for two years.

Unlike her previous, more personal, emotionally-driven choreography, Lang ventures into new territory with “57.295˚” –- an abstract solo set to rapid-fire sounds of electronica bands Venetian Snares and Wagon Christ. The long-limbed Morgan Hawkins, costumed in a gold spiked leotard and bird-like headdress, performs the solo with savvy arrogance. Inspired by Metallica-style head-banging and guided by Merce Cunningham’s objectivity, Hawkins’ solo plunges full throttle into an ever-changing environment — striking tall and angular avian forms, then shifting into high-speed hip and shoulder articulations that ripple through the torso into arabesque lines. Bold, spiraling turns sweep us into this fascinating creature’s unpredictable world.

Just as Lang has pushed the young Hawkins, she’s opened up the range and possibilities of her own vocabulary. It’s likely that she’ll take Spelman Dance Theatre in new directions as well.