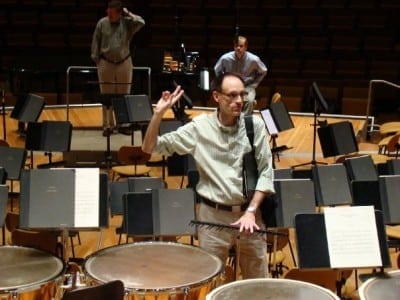 I’ll summarize the opposition’s position by quoting from Harry Haskell’s 1988 book “The Early Music Revival: A History”: “The monumental Bach cantata series that they [Leonhardt and Harnoncourt] embarked on in 1972 offered a convincing alternative to the more traditional performances of conductors like Karl Richter, Helmuth Rilling and Robert Shaw.” Simply put, Shaw was never radical enough for the revolutionaries. (That’s Jeff on the Berlin Philharmonie stage. Photo by Brenda Pruitt.)

As I hear it, there’s a continuum of approaches: the locally venerated Shaw — like Glenn Gould at the piano, perhaps — gets some credit for de-Romanticizing music by 18th c. composers, although for hard-core early-music types, Shaw’s symphonic style (even if somewhat scaled down from an earlier generation) remained hopelessly bloated. These are relative terms, of course.

Whatever you call it — the early-music movement, “historically informed performance practice,” or period-instrument playing — it has become arguably the most vital and fastest growing segment of the classical world. It thus generates debate, sometimes rancorous, over the politics of aesthetics. The “revolution” was a success. Who gets credit? Who sets the artistic agenda? Who’ll be seen as a pioneer, and who’s a cultural throwback? Whose music making really matters? Fascinating to watch even a little slice of this play out before us.

On July 9, we mentioned federal stimulus money coming to Atlanta’s arts community. Our friend at the AJC, Kristi Swartz, later wrote an article that fleshed out the subject. She gets the jackpot quote:

“This is shockingly irresponsible government. Somebody needs to tell Washington that we’re in a serious recession,” said Kelly McCutchen, executive vice president of the Georgia Public Policy Foundation. “The average Georgia family is worried about paying rent and utility bills and not going to the opera on a Saturday night.”

And on the subject of impoverished musicians cobbling together enough money to live, did you hear this NPR report today? It could have been about most of the musicians who play in the Atlanta Opera pit on Saturday nights…

July 21, 2009 · Every year American colleges, universities and conservatories graduate hundreds of trained classical musicians. Only a small handful will be able to get full-time salaried work with a major orchestra. Yet flutist Tod Brody has managed to find a way to pay the bills with his music.

And, finally, I feel like a glutton about this time every year. Last night, after briefly contemplating Haitink conducting Mahler 9, or James MacMillan’s “Seven Last Words from the Cross,” or Haydn’s “The Creation,” I had settled on a rebroadcast of Handel’s comic opera “Partenope” from the BBC Proms — the deluxe, 100-concert, international music festival at the Royal Albert Hall in London — but soon hit pause on the opera and clicked over to an interview with the great William Christie.

Gossipmonger Norman Lebrecht asked the questions. As philosopher-king of the period-instrument movement, both bitchy and self-effacing, Christie spoke at length about his life, about dodging the Vietnam draft, about his contentious (and brilliant) performances of Handel’s “Theodora” at Glyndebourne. Delicious stuff, if that’s your bowl of noodles.

Never tuned into the Proms? Since the festival is operated by the BBC, every concert comes through the internet pipes, there for the clicking. You can listen to everything live — early afternoon Atlanta time — and on-demand up to seven days afterwards. Major conductors and orchestras, meaty repertoire, rarely-heard modernist classics, complete operas, world premieres — it’s the sort of powerfully organized and artistically savvy festival that lets the British feel they still command a mighty empire. There’s even an Atlanta connection: ASO conductor Donald Runnicles leads Strauss, Mozart and John Adams on Aug. 26 … and the festival runs through September.