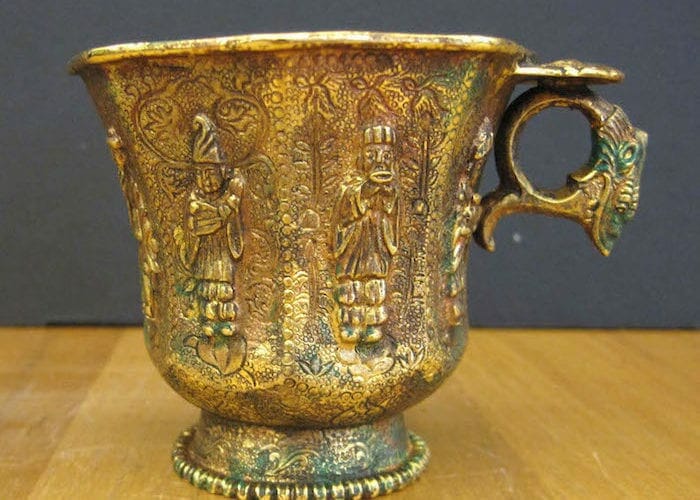 The Silk Road, a network of trade routes that connected East and West from the second century BC to the 18th century, conveyed art and culture from country to country, including this gold cup on view at Fernbank Museum of National History.

Jerry Cullum’s Notebook is a monthly survey that highlights some of the most notable art + design happenings in metro Atlanta. Cullum has written about the visual arts in Atlanta and beyond for decades.

The 90-degree temperatures facing Atlanta this fall feel appropriate for the late-September opening of Traveling the Silk Road, at Fernbank Museum of Natural History (through January 5). The route the camel caravans took from China to such cities as Baghdad traversed the brutal Taklamakan Desert, with a brief respite in an oasis town.

Fernbank’s family-friendly presentation of full-scale models of fully laden camels and the goods sold in the oasis town’s night market deals only tangentially with art. The show, nevertheless, demonstrates that the Silk Road carried art objects as well as precious silk and spices. During the 2,000 or so years of the Silk Road’s existence, it proved itself as one of history’s greatest tag-team efforts, conveying art and culture from country to country. The show includes a reproduction of a Nestorian Christian inscription from China and Buddhist devotional objects based on the road’s side route into India.

The Fernbank show touches very lightly on global trade and immigration today, topics that are reflected obliquely in the Atlanta Photography Group exhibition APG > ATL: Airport 2019 in the atrium of Hartsfield-Jackson Atlanta International Airport (through November 6). It does so most directly in such works as Lesley Price’s Two Oupas. The reproduced vintage photograph shows Price’s grandfather and step-grandfather; the ledger sheet below it represents the decline of Germany’s fortunes. It would require a lot of additional text to explain the historical events that led the owner of a commercial enterprise in Berlin to establish a new company in South Africa and hire the new husband of his ex-wife to run it (thus protecting his own children from the oncoming Holocaust). Note the monthlong Atlanta Celebrates Photography celebration continues through November 7. 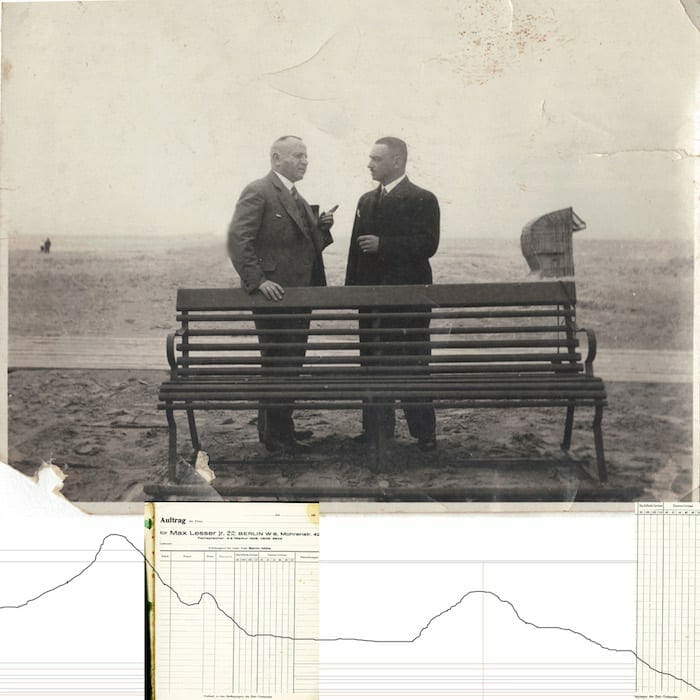 Lesley Price’s “Two Oupas” captures her grandfather and step-grandfather at a critical time in her family’s history. It’s part of the Atlanta Photography Group exhibition “APG > ATL: Airport 2019” in the atrium of Hartsfield-Jackson Atlanta International Airport through November 6.

Sonya Yong James’ Loud Magic, at Whitespace through October 19, uses silk as a major material, along with root clumps, Georgia red clay and horsehair. All are specific homages to the Inman Park gallery and its surroundings — Whitespace was once a carriage house and horse stable for the Victorian home that now holds the project space Whitespec (where the wood-and-graphite wall pieces of Mitchell Biggio’s Ramps and Planes offer a very different effect).

James’ fabric-and-felt weavings are extraordinary creations that reflect a psychological depth. The fabric willow leaves and taxidermic bird of I know a song of the colors where I live . . . does it know a song of me? create a spectacular example of Southern landscape turned into source for inward realizations. 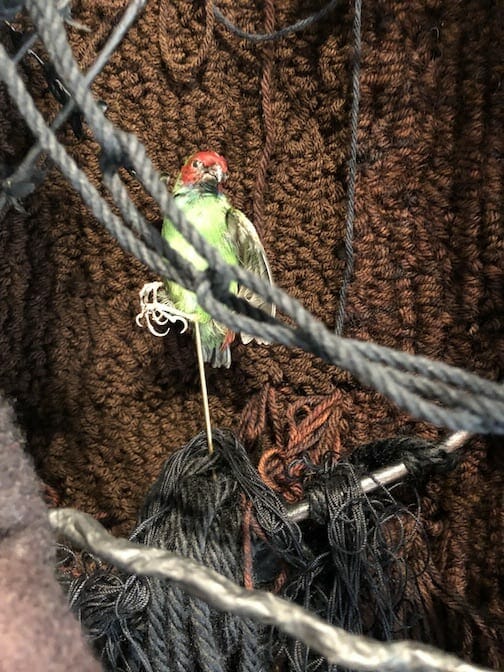 The show is one of the must-sees of the season, and the exhibitions that follow (on October 25) look to be equally provocative in their beauty and breadth of concept — Charlie Watts’ Hortophilia and Hannah Adair’s Hammer of Witches. Also worth putting on your calendar is Rose M. Barron’s thematically parallel photo installation The Call of Water at Blue Heron Nature Center (through November 4).

Donna Johnson’s encaustic and cold-wax abstractions in Interconnected are available as a complete show at Reinike Gallery on Miami Circle (only through October 5), but the series will remain in slightly changing iterations for some time thereafter. Johnson’s Jungian background is reflected in how she juxtaposes work, reproducing microscopic details of human cellular structure with canvases that suggest vast stretches of the cosmos. She’s more interested in presenting parallel images than in making metaphysical assertions, but the work offers a huge amount of room for reflective speculation. 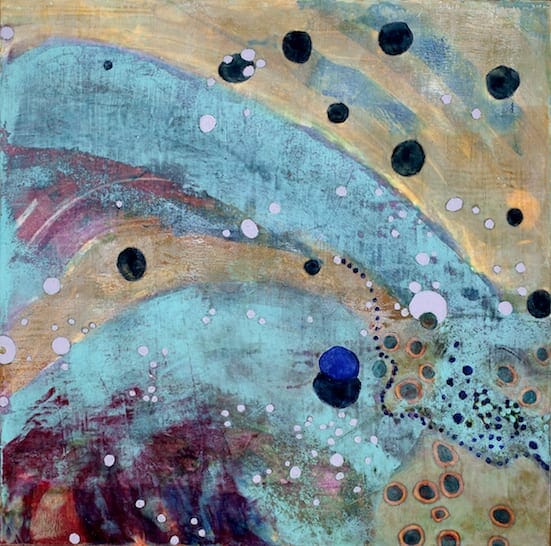 Two retrospectives of photo portraits by poetically powerful documentarians offer a look at aspects of Atlanta’s recent past that have, in our fast-moving times, already been eclipsed by subsequent events.

Remembering Marvin Rhodes, at Different Trains Gallery in Decatur (through October 19), includes a spectacular selection of photographs of Vietnam War veterans and the homeless. Rhodes (1949–2017) was a U.S. Marine. Both veterans and the homeless were represented in Rhodes’ two books in the 1980s, alongside his series featuring Elvis impersonators. 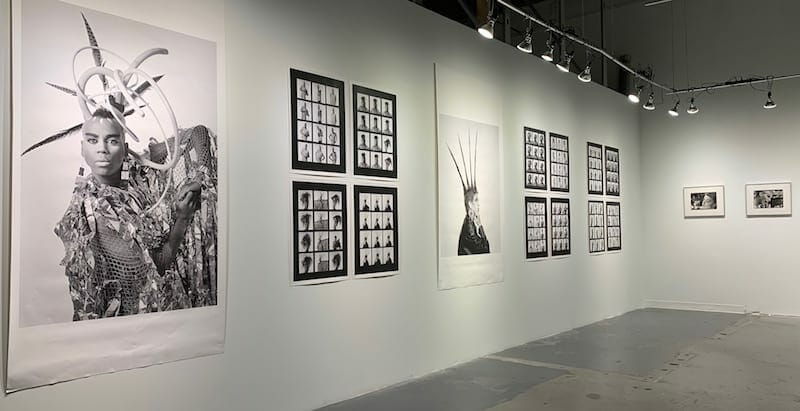 At EBD4: The photography of Al Clayton in the show and fundraiser “Unseen Atlanta”

Al Clayton (1934–2014), another legendary photographer of the homeless, will be represented at Chamblee’s EBD4 in Unseen Atlanta, an October 12 fundraiser that will include his portraits of country music singers, some of which were used in Ken Burns’ recent eight-part, 16-hour PBS series Country Music. Clayton’s portraits of RuPaul and other Drag Queens and Club Kids will follow at EBD4 (October 19–26). The fundraiser benefits Clifton Sanctuary Ministries, which has been serving homeless men in Atlanta for 40 years.

You still have time to see Michael Harris’ flabbergastingly excellent selection of works in Atlanta Collects: 10 Notable Fine Art Collections at the ArtsXchange’s Sinclair Gallery in East Point (through October 12). The show is meant to highlight the African American collectors who’ve amassed this astonishing wealth of artwork by contemporary African American artists.

At Sinclair Gallery: A selection of the work by African American artists, part of the “Atlanta Collects: 10 Notable Fine Art Collections”