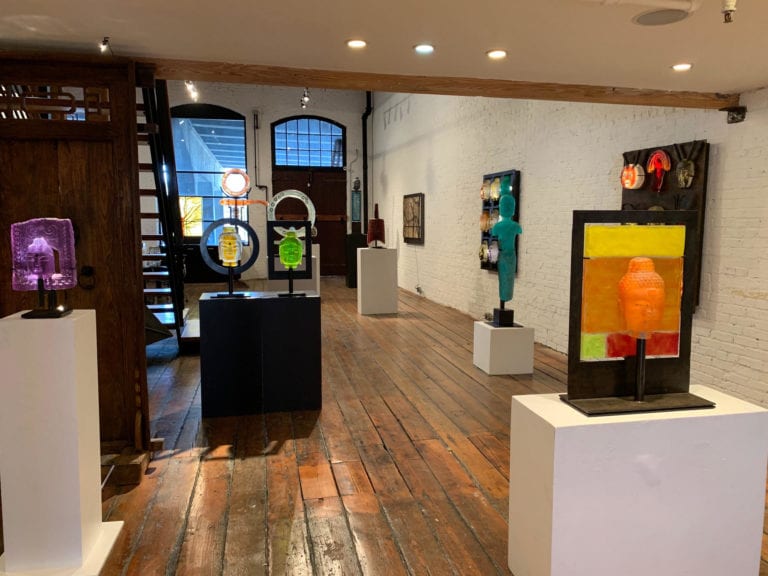 The new Fay Gold Gallery on Castleberry Hill's Mangum Street opens with an exhibition of cast-glass sculpture by Marlene Rose and photographs by Edward Mapplethorpe. (Courtesy of the gallery)

One of the most intriguing points of the new European Masterworks: The Phillips Collection at the High Museum of Art is its installation. It uses the unconventional juxtapositions that collector Duncan Phillips (1886–1966) preferred as he created America’s first modern contemporary art museum. Alfred Sisley’s Snow at Louveciennes (1874) hangs next to John Constable’s On the River Stour (ca. 1834–37), and curator Claudia Einecke’s strategic placement of the Constable painting confirms the truth of Phillips’ observation, quoted in the wall text: This key work of Constable was “at least 50 years ahead of its time in its knowledge and full employment of all the emotional capacities of color” — not to mention its vigorously expressive brushwork.

It got me to thinking about how generational change is an uneven thing, with the same individuals sometimes ahead of their time, sometimes stubbornly behind it and just as often continuing to develop on a singular path that is both or neither.

It’s beyond noteworthy that Fay Gold has decided, at age 87, to reinstitute her legendary Fay Gold Gallery on Mangum Street in Castleberry Hill, next to Besharat Gallery. She starts the enterprise with a double exhibition of cast-glass sculpture by Marlene Rose — an artist her gallery previously represented — and photographs by Edward Mapplethorpe, Robert Mapplethorpe’s less-celebrated brother. It runs through May 17.

This establishes an attractive link between the present and the legendary past, in which Gold presented some of the best of the contemporary artists, including Mapplethorpe and Jean-Michel Basquiat. (Basquiat attended his Fay Gold opening, as did Keith Haring. For many of these celebrated artists, a Fay Gold Gallery exhibition was their first exposure to Atlanta. Andres Serrano was sufficiently inspired to return to the city to create a new photo series.)

Gold will follow this inaugural exhibition with a solo show in late June of noted book illustrator Maira Kalman, timed to coincide with Kalman’s exhibition at the High Museum (and the Alliance Theatre’s family show Max Makes a Million).

Arturo Lindsay is a very different sort of Atlanta art world celebrity. The painter and Spelman College professor emeritus has enjoyed a distinguished career as an artist while mentoring and inspiring generations of students, including the now spectacularly established Fahamu Pecou.

Lindsay’s Painted Poems is one of several independent exhibitions at Mason Fine Art through May 18. Its title connects him to poet-playwright Ntozake Shange (1948–2018), best known for the play for colored girls who have considered suicide / when the rainbow is enuf. The two carried on a mutual dialogue — Lindsay created paintings that responded to Shange’s poems, and she wrote poems in response to his paintings without either body of work directly illustrating the other. Shange’s death interrupted the dialogue, but Lindsay’s paintings continue to be “painted poems” responding to Shange’s legacy and their shared concern for young victims of wartime violence, police violence and gang violence.

Shange and her creative legacy are honored in a seashell-laden shrine here. It uses ideograms and mathematic formulas that Lindsay devised to symbolize the stages of spiritual evolution through which the young victims pass. They go through the Gate of Return, enter a chrysalis phase and transmute into a winged process of maturation that culminates in their return to humanity as higher beings. Some of the paintings bear the names of individuals killed around the world, from African countries engaged in internecine conflicts to U.S. cities such as Ferguson, Missouri.

New work by Larry Walker dominates an adjacent gallery at Mason Fine Art. Its subtle reflection on old age is more than worthy of discussion, but I refrain because the trajectory of his career has been so well documented recently. (L. Walker, the book published in August by MOCA GA, is for sale alongside Walker’s new work).

Group exhibitions by Spelman and Morehouse students and a curated show from the University of Georgia fill a third gallery, so anyone inclined to meditate further on the theme of generational issues will find ample material for reflection.

I have long been fascinated by Steven Seinberg‘s self-conscious reinvention of New York School abstract expressionism ever since he emerged as a young artist some 25 years ago. He absorbed the lessons of classic works by Cy Twombly, Robert Motherwell and others, and synthesized them faultlessly. His show at Bill Lowe Gallery through May 10 continues to reference these painting strategies in works that also pay homage to the poetry of Octavio Paz, from which he extracts the exhibition title, Only the Light on the Sea.

This unembarrassed homage to different aspects of an older modernism harmonizes well with the paintings of a slightly younger mid-career artist, Nissa Kauppila. The Vermont native maintains a studio in China, where she seems to have incorporated the dynamics of abstract expressionist gestural brushstrokes into traditional Chinese ink painting. Her memorable renderings of appealing creatures, from bats and owls to rabbits and chickens, form another homage to history.