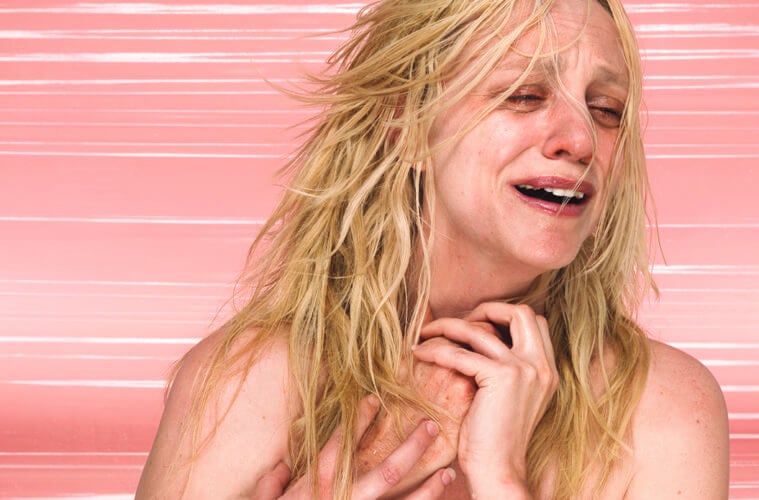 Covid, 9/11 grief give resonance to “This Mortal Coil” at Zuckerman Museum

This Mortal Coil, curated by Cynthia Nourse Thompson at Kennesaw State University’s Zuckerman Museum (on view until December 11) is a tender look at the fragility of the physical body through depictions of grief by 17 artists. The title of the exhibition is a quote from Hamlet: “For in that sleep of death what dreams may come/When we have shuffled off this mortal coil/Must give us pause.” Shakespeare skillfully addresses the ambivalence inherent in the idea of human mortality. Perhaps the Shakespearean image that comes most readily to mind is that of Hamlet contemplating a human skull, in deep thought about the meaning of life on earth.

Is there new territory to be mined in this exhibition? Are there existential questions we need to revisit at this pandemic moment? Gertrude Stein, on her deathbed, asked her lover: “What is the answer?” and when no response was given, she asked: “What is the question?” What are the questions and answers now? Is there something different in this time of the pandemic — do we mourn any differently? Is the fragility of life and grief’s portrayal different than in the four centuries since Hamlet? 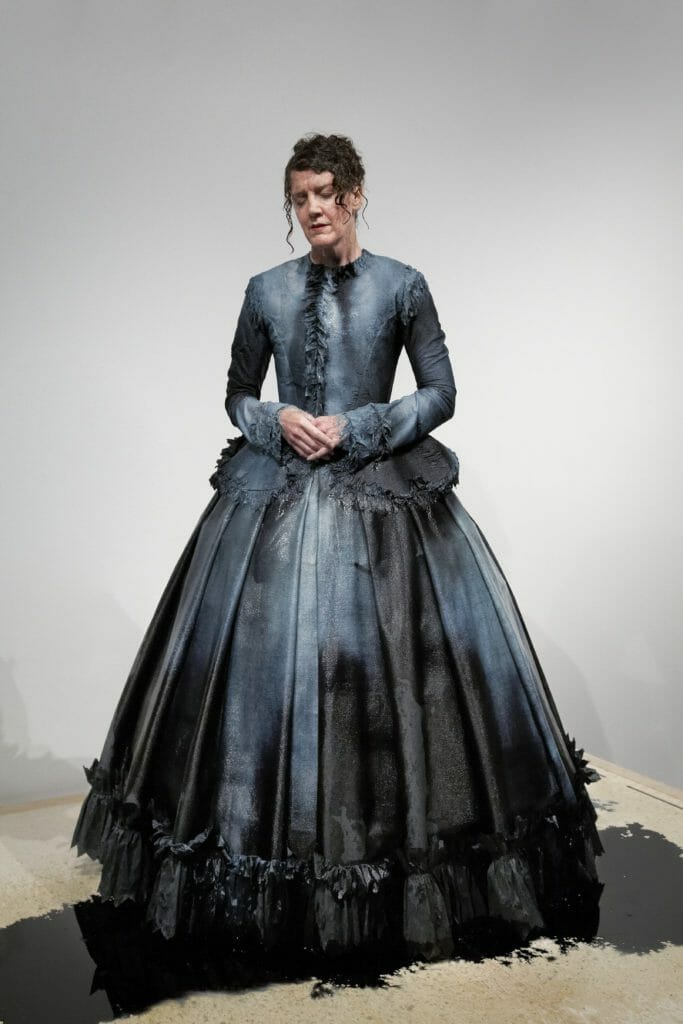 Martha McDonald’s sculpture “The Weeping Dress” is also featured in a performance-art video as part of the exhibit. (Photo by Christian Capurro)

The palette of This Mortal Coil is a succession of monochromes in subdued hues and tonal variations. The darkest blue indigo is the color of Martha McDonald’s “The Weeping Dress,” a work from 2011. The dress is a Victorian mourning costume. The sculpture is made from crepe paper that has been fused to muslin and dyed with indigo inks to give the dress the darkest color that was possible in the 19th century. Widows wore this dark blue hue in Victorian times as a symbol of mourning; the premise was that no light should reflect from the grieving person.

Presented as a separate work in the gallery is a video in which the artist is wearing the dress as she stands under a rain machine, the water pouring down upon her to the sound of an Appalachian folk song, “Three Little Babes.” As the dress bleeds ink onto the floor, it turns a stained white.

The sculpture without the video is a beautiful object, exquisitely handcrafted. The video is more than documentation of the artist’s performance; it brings the underlying ideas of pain and grief to life.

Janine Antoni also uses symbols of grief from the past in her sculpture “to long,” 2015, which evokes a Victorian tombstone with a tall plinth, on top of which sits a human rib cage on a pillow. That is topped by a half head pressing into the bone, the ear protruding into the rib cage to hear the heart. The color of this sculpture in polyurethane resin is a warm cream, a deeper version of the color of the artificial skeletons used in science classrooms. The sadness of the head wanting to connect once more with the deceased makes the feelings of loss and remembrance palpable.

Two color photographs by Rosemary Laing, “a dozen useless actions for grieving blondes #12,” 2009, and “a dozen useless actions for grieving blondes #5,” 2009, are images of a distressed young woman shown nude from her torso up, hands clutching her neck and shoulders as she cries with anguish. In grieving blondes #5 the woman clutches a third hand perhaps of a loved one who has just died; her mouth is open, her face reddened by her sorrow, against a striped rose-colored background that accentuates her agony. These photos picture a performance of pain that calls up the weeping women in Picasso’s “Guernica,” figures beyond consolation in their grief.

Videos and photographic works that document performances have an important presence in this exhibition. Donna Smith Jones’ work, “Cyclic,” 2011, is a single-channel video self-portrait in which the artist flings herself into the snow, nude from the breast bone up, and lies there for as long as she can stand the cold. This kind of self-inflicted pain has a long history in performance art since the 1970s: one only has to think of Chris Burden being shot or Marina Abramović’s performances that test her endurance. Although “Cyclic” has a place in this exhibition, one wonders if it is mining any new territory. 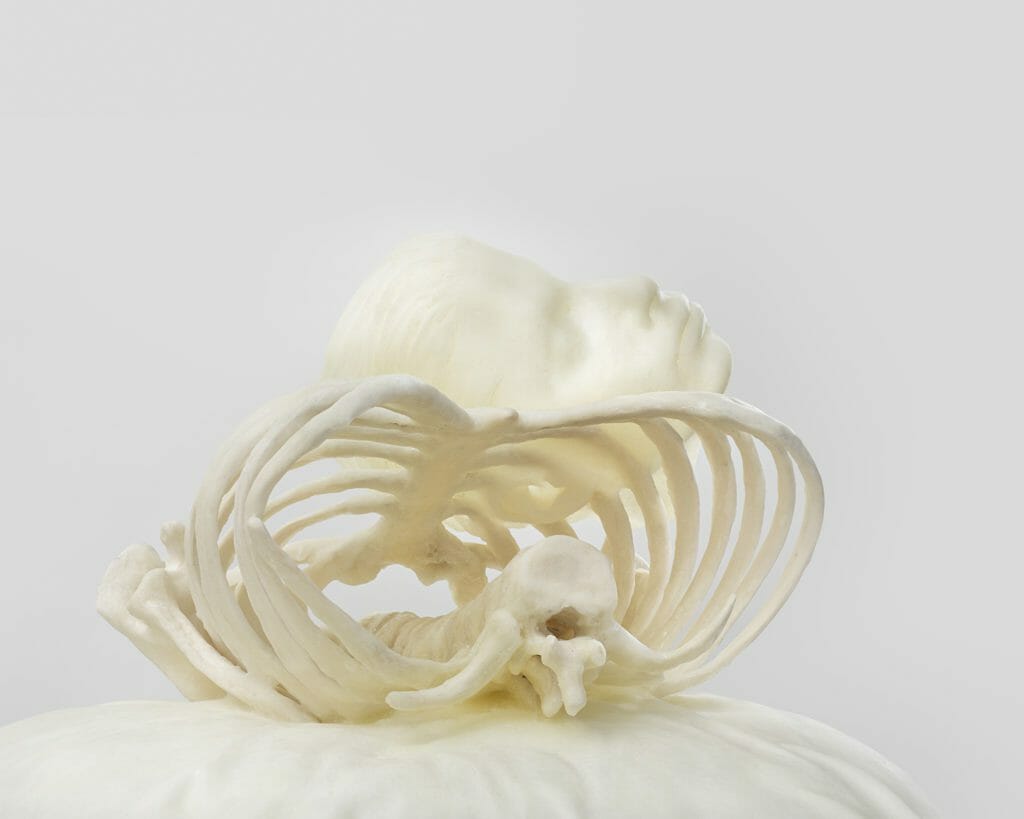 Tony Orrico made his large embossed work on white paper by biting the paper in strips and then joining them. The drawing has a certain elegance, but it is the video of the artist making the work, seeing him with the paper in his mouth, that adds intensity. This work is reminiscent of Janine Antoni’s “Lick and Lather,” 1993, a series of self-portrait busts in chocolate and soap where Antoni licked the cast chocolate self-portraits and washed herself with the ones made of soap.

Many of the works in the exhibition use the body itself. “Blood Cameo” by Gail Deery is a small embossed and colored print made of paper pulp of a woman’s profile, similar to the kind of jewelry made popular in the Victorian era. Anne Wilson’s three works, “Dispersions (no.1),” “Dispersions (no. 4),” “Dispersions (no. 29),” all 2013, are made of damask table linens where the artist cut into the stains. Embroidered with thread and hair, they are like small bursts of cosmic light. Carson Fox’s “Hair Filigree No. 5,” 2004, is a beautiful decorative patterned screen that references Victorian jewelry made from the hair of the departed.

When asked why she always wears black, one of the characters in Chekhov’s 1895 play The Seagull responds, “I am in mourning for my life.” Grief, remembrance and the fragility of life are subjects that artists have always mined. The question is, does this foray into darkness heal? The ongoing pandemic that causes us all to address the tenuous state of life lends the works a fresh edge.