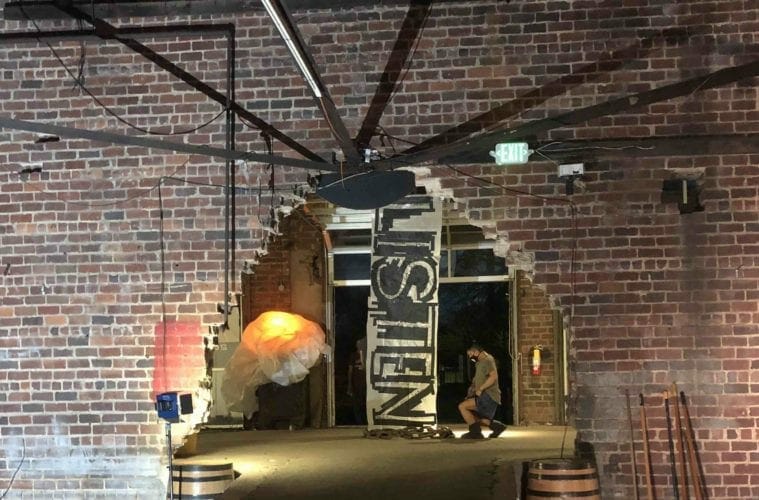 "No Time to Lose" will incorporate the architecture and history of the B Complex with one Friday performance and two on Saturday. (Photo by Sue Schroeder)

Core Dance will return to the stage and a live audience with three performances of a new work called No Time to Lose this weekend at the B Complex. Audiences will be limited to 10 people for each performance; Friday’s show will be livestreamed at 8 p.m.

No Time to Lose was created during a 12-day period by 11 artists from the United States and Europe representing numerous disciplines. Their task was to mold a performance around the theme of the butterfly effect: Every action, no matter how small, can alter the course of the universe.

“It’s been a beautiful cross-pollination of ideas, how to work with urgency and allow ideas to bubble up,” says Sue Schroeder, Core Dance’s artistic director and cofounder. “We’re all getting to know each other through the creative process.”

Sue Schroeder brought together artists from two continents to create “No Time to Lose.”

Schroeder says the intent was to bring together a group of artists from diverse backgrounds and challenge them to come together to create a cohesive work.

“During COVID, there’s been a lot of streaming and that’s not a place I relish working,” she says. “This is a way to get together to work and create. We’ve built a microcosm of a small community with a diverse group. Our thing is, ‘Let’s get to work and keep making work.’”

The artists involved have relished the opportunity. Some have not worked as part of a group for more than a year due to COVID restrictions. “Last March, my entire career essentially shut down,” says Hennessy.

Adds Labbe-Webb, “After a year of never leaving the house, being in the presence of other human beings is profound within itself.”

Because No Time to Lose has been created in the past two weeks, it’s been informed by  emotions raised from the two most recent mass killings, first in metro Atlanta and then in Colorado. “It has affected us all,” says Earnhart. He attended a weekend rally and asked several participants to say a prayer for the victims, themselves or a troublemaker in their lives. He recorded them, and some of those meditations are folded into in the piece.

The year of COVID will also be a major influence. “The piece has an abstract bent to it, this past year has had an abstract bent to it,” says Larsen. “This is the first time I’ve been in a room with people in over a year. That’s been really meaningful, that’s been deep. We have an opportunity to redesign our world coming out of this, and a lot of people want a different world.”