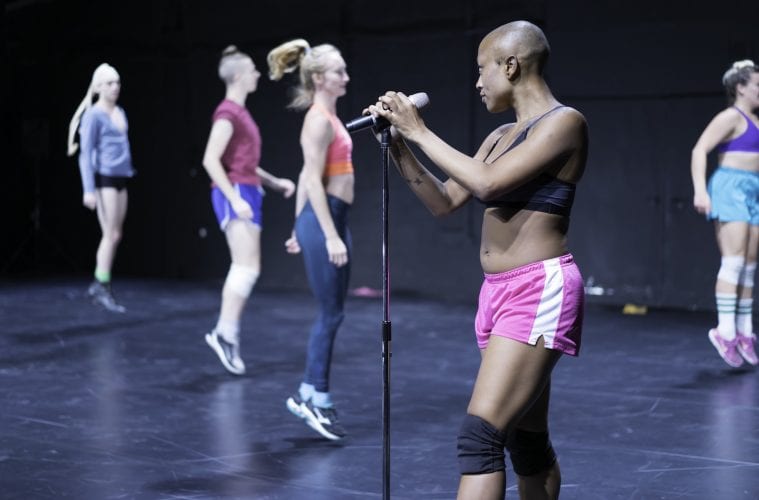 Remember childhood games like tag and duck, duck, goose? In both pastimes, group dynamics shift whenever one player touches another, putting the tagged player on the spot.

In American Playground, Israeli choreographers Niv Sheinfeld and Oren Laor use such games as vehicles to explore different kinds of juxtapositions — between personal identity and national identity and between the longing to become someone versus the disillusionment when that desire is frustrated.

The work is part of a double bill, which Core Dance will present at 7 Stages from January 31 to February 2. The program will also feature the U.S. premiere of The Third Dance, a continuing story of Two Room Apartment, which Sheinfeld and Laor performed in Atlanta in 2013 before presenting Ship of Fools here in 2015.

American Playground debuted in 2016 as part of Atlanta’s EXPOSED Israeli Dance Festival. It has remained an active collaboration between Sheinfeld, Laor and Core Dance and has since evolved through a series of performances in Atlanta, Tel Aviv and Houston. Play itself was a choreographic tool that Sheinfeld and Laor used to develop the work as they invited Core dancers to relive the American games they played as children.

“It’s beautiful to watch and to be reminded that games are ageless; they are enjoyable to play when you’re all grown up too,” Sheinfeld reflects. “Revisiting childhood games on stage shows that our inner child never really dies, and this, in our eyes, creates a lot of compassion for the human condition.”

Sheinfeld and Laor point out, though, that the show doesn’t solely revolve around childhood games — it also shows games relating more to adults, with topics ranging from gender identity to memories of adolescence.

When it came to weaving together the diverse palette of themes in American Playground, Sheinfeld and Laor credit the artists of Core with helping the process.

“We don’t search for one movement language but rather seek to devise a stage event that can allow all kinds of performative expression,” explains Laor. “With Core, we found great talents with very diverse skills, and we weaved all these skills into the performance: from voguing and walking to classical ballet and circus acrobatics. It sounds like a potential mess, but actually all styles reside together in the same area very comfortably.” Niv Scheinfeld and Oren Laor will perform The Third Dance as a continuation of American Playground. (Photo by Efrat Mazor)

The work does not yield to a specific dance genre, Laor said, but rather celebrates “the visibility of the self, in a world where people are less visible than tweets and posts.”

Sheinfeld and Laor describe themselves as “political creatures” and feel that it’s essential to present alternative viewpoints to belief systems that place less value on the body and the individual.

“The body is ours,” says Sheinfeld. “We will play as we like, we will enjoy and not yield to voices who try to belittle us. And it has to be sincere; we have to believe it ourselves in order to share our enjoyment, our resilience. So, we play with the body, the flesh, its weight, size and color.”

Laor adds that the pair’s work “looks directly at the public instead of putting it in the dark.”

“We are not afraid of looking, or of being looked at,” he says. “We marvel in it. Not because we want to scare anyone or take them out of their comfort zone, but rather, we want to truly communicate. We want to bond and create a silent — and sometimes not-so-silent —  understanding.”